The world's gone horse-mental, people. First Spielberg, now Dustin Hoffman. That script gathering dust in your bottom drawer? Stick a horse in it and get it sent out. For we live in a world where the horse is king. It's the rise of the planet of the horses.


Throw money at a horse: that's the name of the game these days. A slightly more high-end Pin the Tail on the Donkey. HBO like to throw money at stuff, and after years of forging a reputation for making intelligent, highbrow drama their name will get more or less anyone on board for a well-scripted TV show with a meaty premise. It was enough to get Scorsese in for Boardwalk Empire, and now comes the latest big name to realise telly's actually where it's at: Dustin bloody Hoffman.

In an interview in the Daily Telegraph yesterday he gave the explanation that's becoming very familiar these days: all the best writing is now on TV, you don't have studio execs wanting to see the rushes every day, and you can tell stories that aren't possible to do in two hours. Personally I don't see much evidence of movie stars sick of the Hollywood merry-go-round moving to TV for good; just a much healthier attitude on their part towards a medium that was traditionally considered inferior or trashy.

The show that's managed to land Dustin is Luck, a drama about horse-racing and the people around it. He's Chester 'Ace' Bernstein, a gambling mogul just out of prison and looking to take over a racetrack and introduce casino gambling there. From the evidence of the pilot, though, it's less a star vehicle for him than it is an ensemble piece: we also see a group of four professional gamblers (including Ian Hart) win $2.7 million at the track between them, John Ortiz training the horse Ace has bought using his wingman Dennis Farina as a front, and Nick Nolte being grizzled and mumbly. 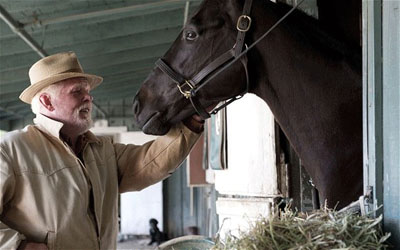 "Loved you in War Horse. What's Benedict Cumberbatch like in real life?"

This is all fine as far as it goes. You get the impression this is all headed in a good direction, but from a pilot I'd expected more effort to grab me and not let me go. All Luck's really done so far is announce proudly: "Dustin Hoffman's in this. What more do you want?"

I wonder if it's possible to criticise an expensive, well-made HBO drama because its story isn't all that interesting, without people telling you it's your own fault for not being clever enough to follow it? Well, I'm nailing my colours to the mast. We're now living in a time when high production values in American TV drama are no longer surprising - they're just the norm. Luck is beautifully executed from a production point of view; I just didn't care very much what was happening.

Maybe this is down to the horse-racing, which I've never understood or been interested in. There are a lot of odds and betting terminology here, and you can see where director Michael Mann has realised that this could be a problem, by focusing more on the races themselves, using the standard 'spectator stands up really quickly' shot so you know something interesting's happening on the track. 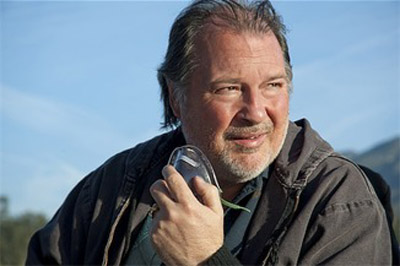 "Don't wind yourself up," someone says to this guy at one point. "Your face is going all different colours."
"Fuck my face!" he replies, brilliantly.

Still, at least you get Nick Nolte, who spends more or less the entire episode talking to a horse. "You don't know how special you are," he growls to it at one point, and he's quite right: you can see it doesn't have a clue. Thick as pigshit, horses.

Anyway, look: it's fine. It's a big deal, it's HBO, it's really well-made and it's got some great actors in it. You can more or less guarantee it'll end up being amazing and I'll have to subtly change this review in two months and hope no one notices. But for the moment, it's a horse too far for me.

More:  Luck  Dustin Hoffman  Nick Nolte  Michael Mann  David Milch  HBO  Sky Atlantic
Follow us on Twitter @The_Shiznit for more fun features, film reviews and occasional commentary on what the best type of crisps are.
We are using Patreon to cover our hosting fees. So please consider chucking a few digital pennies our way by clicking on this link. Thanks!