In an increasingly formulaic industry, it's rarer now than ever to experience that most simple of pleasures: a movie you can't predict. Lucy is a bizarre mish-mash of ideas - Besson himself says the first third is Leon: The Professional, the middle section is Inception and the final act is 2001: A Space Odyssey - and it gels about as well as you'd expect. It's frustrating in its execution and bafflingly vague where it matters. But, but: just try to second guess it. Even if it falls short in almost every department, Lucy is a fascinating anti-blockbuster that delights in its deficiencies - even the anti-climactic ending is a thrill, just because it's different.


Essentially, Lucy is your textbook Luc Besson pitch: a barebones pseudo sci-fi concept dressed up with pretty girls, fast cars, gunplay and a feeling you can't shake that something somewhere has failed to translate properly from French to English. Scarlett Johansson, herself familiar with things lost in translation, is Lucy, a gullible party girl studying in Taiwan who is tricked into participating in a drug deal by her boyfriend and finds herself at the behest of a drug lord, played by Oldboy's Choi Min-sik. So far, so Nikita: a pretty girl thrust into a world of violent men.

However, once a packet of a mysterious substance is sewed into Lucy's stomach - exposition handily provided by a wonderfully incongruous Julian Rhind-Tutt, never primmer or more proper - Besson hits the accelerator and leaves that movie behind. The drug leaks into Lucy's system. Things get weird. The movie's bad science - already bogus, given that it's based on the myth that humans only use 10% of their brains - hurtles into overdrive. Johansson's character morphs from innocent bystander to indestructible goddess within about five minutes, leaving her so powerful and disinterested, you're constantly waiting for her to transcend the movie itself in search of something better. 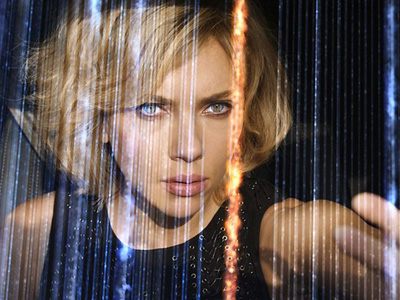 Lucy also found time to invent and perfect the Vibroharp.


Lucy loses her humanity in the blink of an eye. She shoots a taxi driver because he doesn't speak English. She shoots a patient dead on a hospital bed because his tumour is inoperable. To prove her omnipotence to one of the movie's many Disbelieving Scientists, Lucy informs him that she knows the precise details of his young daughter's death (instead of, say, telling him she knows what he had for breakfast). And this is the movie's hero! It becomes apparent very quickly that Lucy is not the ass-kicking super-heroine movie that the marketing and the holding-of-the-gun-sideways-in-the-trailers suggested. Preconceptions are obliterated. But still you watch, because you cannot turn away.

Part of the frustration of enjoying Lucy is the fact that we're denied the pleasure of seeing Scarlett Johansson actually act. For two thirds of the movie her humanity ebbs away until she's Dr Manhattan in an LBD, observing mankind as one would an ant farm. The first third of the movie is superb; Johansson's fear is palpable, the character rendered vulnerable from the off. But the rest is an upbeat riff on her anti-performance in Under The Skin: measured, dialled down, empty. Between these films, Spike Jonze's Her (in which she's heard but not seen) and Captain America: The Winter Soldier, in which she's seen (mostly from low angles) but not required to do much in the way of heavy lifting, 2014 has been the year Scarlett Johansson conquered Hollywood without even trying. 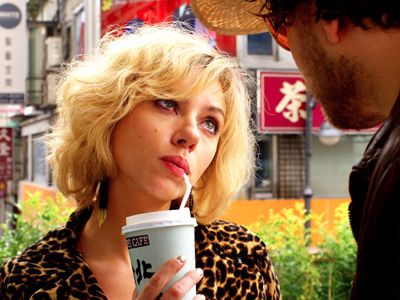 
The film's final third defines Lucy as a film unconcerned with formula - or form in general. Frankly, it's a mess - the only indicator that the movie has any forward momentum at all is the continual presence of interstitials showing Lucy's increasing brain capacity. Despite Lucy having the ability to manipulate time and space, she's still opposed by a flesh and blood antagonist; there's still room for a sidekick, who is almost entirely useless; meanwhile, Morgan Freeman completes his Basil Exposition hat-trick of redundant supporting characters whose only function seems to be reeling off pages of the script (see also: Transcendence, Oblivion).

Lucy toys with Big Ideas and Weighty Themes (existence, evolution, the meaning of life, the usual) yet Besson doesn't have much to say about any of them, preferring to act smart and play it cool. The movie has no end game at all: it features hands down the most shockingly unexpected credit roll in recent memory, one that practically invites a collective "What the fuck?" from a confused audience when the lights go up. No character arcs are resolved. No victories are won. There will be no sequel.

Good. Because there's nothing worse than a film that plays it safe. Besson doesn't so much go off the deep end as he does piss in the pool so no one else can swim in it. Recall Limitless, with its similar plot of mind-expanding drugs, and it seems rote in comparison. For all its cod science and fishy philosophy, Lucy is at least fearsomely unique; a glossy, beautifully shot, action-injected thinkpiece that speed-reads its own script, forgets where it's going and styles it out in a free-form finish. I could not bring myself to dislike a studio film with such mutant DNA. If this represents just 10% of Luc Besson's creative potency, the mind boggles at what he could achieve at full capacity.

More:  Lucy  Luc Besson  Scarlett Johansson  Choi Min-sik  Morgan Freeman
Follow us on Twitter @The_Shiznit for more fun features, film reviews and occasional commentary on what the best type of crisps are.
We are using Patreon to cover our hosting fees. So please consider chucking a few digital pennies our way by clicking on this link. Thanks!