So where are we at with Mel Gibson? Poor old racist, misogynist, anti-semitic, fly-off-the-handle Mel - have we forgiven him? I only ask because he's far and away the most entertaining thing about Machete Kills, yet I'm not sure if I laughed at his antics for genuine LOL-worthy reasons, or because of some weird residual fascination after that time he called a policewoman "sugar tits" and became one of Hollywood's most reliable loons for a while. Can it be both? For what is essentially a one-note joke, Machete Kills is full of questions.


Spun out from a fake trailer in a fake grindhouse movie, the Machete franchise (Machete Kills is the first sequel to 2010's Machete, with another on the way titled, I kid you not: Machete Kills Again... In Space!) is an exercise in good-old-fashioned exploitation filmmaking on a budget. Well, a budget that reaches into the tens of millions. This is where the problems begin, at least for me anyway.

For a film that cost thirteen Sharknados, why does Machete Kills feel like it was made back-to-back on the same beach? Obviously Rodriguez has stuck rigidly to his guns in recreating the B-Movie experience, but that's exactly the problem: it's a recreation, and the joke had already worn thin about halfway through the first movie. There's something off-putting about a talented, connected filmmaker deliberately punching below his weight. Anyone can do that. 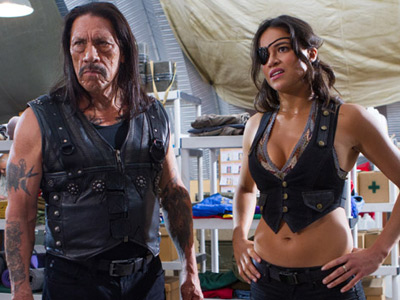 Cheer up, it's not all bad news. Oh wait you are smiling. Carry on.

Fortunately the plot barrels along without giving the audience too much of a chance to focus on the deliberately ropey effects and editing. Picking up after the events of the first film, our titular hombre is now working for the government, tasked with taking down corrupt military-types. Naturally it's not long before things go awry and Machete finds himself caught up in the middle of a conspiracy between the US Government, a Mexican revolutionary group, and a mad scientist with a penchant for weapons of mass destruction and Star Wars. It's insane bunkum of the best kind.

Along the way we're treated to a host of colourful characters - most notably Mexico's deadliest assassin, El Cameleón, who provides value for money in the cameo department (it's complicated) and Sofia Vergara's man-hating Desdemona, intent on exacting revenge on all of mankind... which she does by running a brothel full of sexy, semi-clad, gun-toting ladies of the night. Hmm. But hey, remember: exploitation movie. 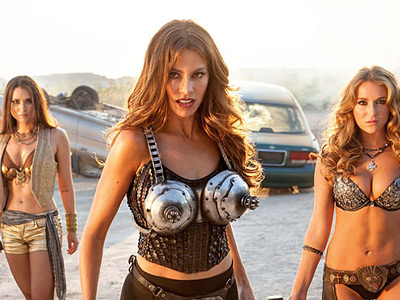 And so we come to Mel Gibson. There's a look in Mel's eyes throughout this film like he's constantly expecting his own shadow to attack him. If you've ever watched a cat playing with the wind, his performance is much the same. He lurches about one minute, flits and rolls his eyes the next. It's hilarious. I have no idea how far along he is in his recovery from that very public meltdown; I only hope he was lucid enough when signing on that his skittish behaviour is deliberate, otherwise the exploitation aspect suddenly takes on a rather more tragic angle. Charlie Sheen, or Carlos Estevez, or whatever he calls himself nowadays can fuck right off, however.

I get this film and the reasons it exists, really I do. It's just between the budget, the talent and the opportunity, it occupies a grey area where I can't quite connect the pieces into something genuine and congruous. But then I suppose that's the point: Machete Kills is a B-Movie with no other goal than to raise the odd titter within a roughly 90 minute window, and I can't say it didn't do that. Need you ask for more from a film?