I actually watched Mad Max: Fury Road in its week of release, but it was such an overwhelming experience it's taken me all of seven months to mentally unpack it all, like when someone emails you a crazy big zip file which basically nerfs your inbox and you can't do anything until it's properly downloaded. That, with writing. Anyway. This is the best film of the year by a very long stretch, I'm off to watch it again because it got it on Blu-ray for Christmas and oh you've already stopped reading.


It starts with a chase; if you have to stop and ask who's chasing who and why then you're already dead. Mad Max: Fury Road begins and ends with its foot jammed on the accelerator - as straightforward a movie as its title suggests, it's about driving and surviving and if there are bodies piling up on the roadside just make sure one of them isn't you. Exposition evaporates in this desert; characters are forged in the heat of the moment - George Miller doesn't give you the courtesy of slowing down and nor should he. Fury Road is an instant genre classic; a stunt-a-minute thrill-ride that makes Fast & Furious look like Driving Miss Diesel.

Where has this George Miller been hiding? Since the millennium, the only two movies he's directed have been about tap-dancing penguins. Absence, in Miller's case, makes the heart grow furious, because his return to the Mad Maxiverse is a raging beast of a movie, one that should hopefully act as a wake-up cry to an action genre that's turned to costumed heroes for kicks instead of the simple, visceral thrill that's generated between man (or woman) and machine. The title here is quite literal: Fury Road is one long stretch of anger that'll kick your asphalt into the next thousand years. 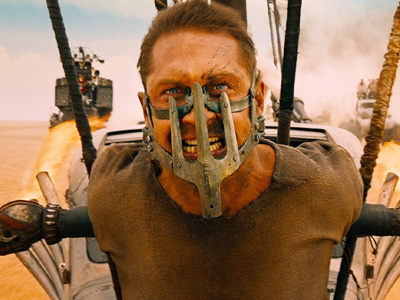 Tom Hardy straps in for another mile-a-minute press tour.


To say Mad Max: Fury Road is an eye-opener is an understatement: watching it like is like waking up in the middle lane of the Autobahn. The phrase 'an assault on the senses' is hereby retired. Allegedly, Miller shot over 450 hours of madness, and quite frankly, the stunts are so chaotic and insanely gnarly it's a miracle no one was killed (the editor, however, probably had several heart attacks). It's a lofty comparison but there are scenes here that recall Ben Hur's chariot race sequence, at least in terms of knuckle-whitening danger. I daresay there aren't many historical epics that couldn't be improved with more flamethrowing guitars.

Polecats, War Boys, Flamers, War Rigs, Guzzoline: even with no prior knowledge of the Mad Max movies, Miller creates a whole universe in mere minutes and railroads his stars right through the middle of it. You could fit the plot on the knob of a gearstick - it's essentially one giant chase scene, as if that's not a compliment - but the director has assembled a menagerie of grotesques to populate his movie: women being milked by their teats, men being sucked of their blood, bastards and cripples and broken things baring their gritted teeth to survive. Fury Road is the most visually arresting movie of the year; a film so rammed full of hellish inventiveness it cannot possibly be adequately digested in one viewing. Imagine the lived-in-and-caked-with-shit aesthetic of Waterworld but run bone dry and overrun by the hill people in The Hills Have Eyes.

Fury Road is the purest example of a singular vision I can recall: George Miller's vision. It took years and years of development and hard graft and delays and setbacks, but hot damn it was worth the wait. You can't make a movie like this by committee. Groupthink would dictate that Tom Hardy's Max be more in focus; that he has more hero shots; that there be a budding romance; for Christ's sake, just add some sort of crutch people can cling on to! Sod that: Fury Road needed to be sparse and raw and uncompromising and weird. There is absolutely nothing ordinary about it.

There's a fist-fight about 30 minutes in that most movies would skim past but Fury Road takes the time to get it right. Max is chained to Warboy Nux (Nicholas Hoult) but nonetheless attempts to steal the gigantic armoured truck of Imperator Furiosa (Charlize Theron) using just a gun, a water hose and a chain. It's a minor and relatively inconsequential scene but it's ugly and desperate and it hurts and it lays the foundation for the action to come: if there is going to be conflict, it's going to be orchestrated down to every last blow. And this is all during Fury Road's downtime. 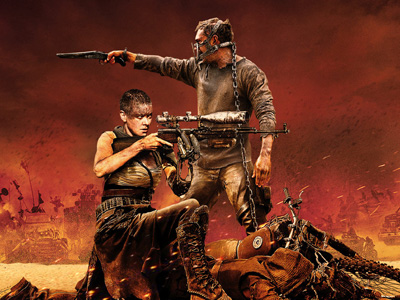 
Hardy, one of the more talismanic leading men of late, is excellent at giving less for more, providing a scaled-back performance that wisely leaves the theatrics to Miller's camera. With trademark intensity intact, a lifetime of simmering violence contained behind a closed mouth and a seen-some-shit thousand yard stare, Hardy's Max is the fizzled firework that could take your face off if you get too close: a powderkeg of repressed rage. He's a hero with just the right amount of anti-.

Really though, this is Charlize Theron's movie. Sidelining Hardy to the role of co-pilot was a bold move but it pays off, not only because Gritty White Action Hero Males are boring, but because Theron's Furiosa is such a compelling protagonist. Possessing the emotional depth that Max lacks - emotion that's unleashed in a truly sumptuous shot of her howling in the desert wind - Furiosa is a candidate for coolest character of the year: a stone-cold badass in custom-made cosplay that's single-minded, sexy, strong and sensitive - and not once does her gender define her actions. That Furiosa is the calm little centre in this, the angriest movie of the year, is just one of the many unpredictable delights that make Fury Road a classic.

Thanks for reading this year, everyone. Sorry I only saw about six films and one of those films was Pixels. I'll do better next year.
More:  Mad Max Fury Road  Mad Max  George Miller  Tom Hardy  Charlize Theron  Rosie Huntington-Whitely  Nicholas Hoult
Follow us on Twitter @The_Shiznit for more fun features, film reviews and occasional commentary on what the best type of crisps are.
We are using Patreon to cover our hosting fees. So please consider chucking a few digital pennies our way by clicking on this link. Thanks!