Several times during the interviews before Mad Men's fifth season premiered, we heard the mantra from Matthew Weiner when asked for the season's theme: "When is everything going to get back to normal?" This being Mad Men, this could've meant any number of things: some sort of high-minded allegory for cultural upheaval, a warning not to expect the characters to revert to type, or one of those loose ideas they throw in from time to time that seem meaningless, then significant once you've spent three hours and a couple of Old-Fashioneds thinking about it. Now we've seen the whole thing, it makes a lot of sense.

Season five took us away from what we'd come to expect from the Sterling-Cooper-Draper-Prycers, threw in a bunch of the usual changing-face-of-America stuff to unsettle them even further, then left us to ruminate on it a bit. Having done so, it strikes me now that this was a pretty bold departure, even for a show that has moved some hefty goalposts on its characters in the past.

Everyone's in a state of flux. Don seemingly has everything he ever wanted, but being - genuinely, it appears - happy with his new young wife has made him neglect his work. All of a sudden, with the ideas of the counterculture creeping into the workplace, and Ginsberg the new creative proving just as talented as he is cocky, Don's in danger of becoming old and irrelevant. He stands around backstage at a Stones concert looking out of place and baffled; his wife buys him a Beatles record and it leaves him cold.

And so his marriage to Megan begins to threaten his self-image. When Megan chooses acting over advertising, it hurts him, because he considers himself an artist and therefore advertising a valid form of artistic expression. Why would someone with a talent for it choose acting instead for creative fulfilment? Could it be that this creative outlet he's chosen is actually just the work of hacks who couldn't make it as artists? 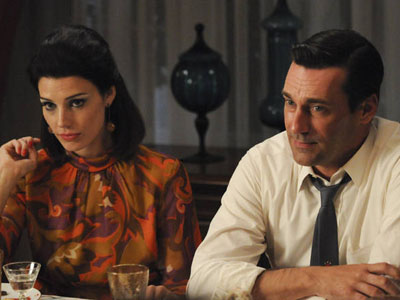 Those were his thoughts, just in case that wasn't clear. I could draw a thought bubble on the page if it makes it easier.

Pete, meanwhile, has moved out to the suburbs, a move which has failed to fulfil him, and he's reminded of this every day by his companion on the train, Howard, who has an apartment in Manhattan where he can cheat on his wife. I increasingly think there's nothing in the world that would make Pete happy, but for the moment at least, he thinks that being this guy would do the trick. The solution? Sleep with the bloke's wife, obviously, then convince himself he's in love with the woman.

Peggy's being frozen out too, marginalised by the men in the office, and outshone by Ginsberg, the guy she hired, despite Stan's advice that she should hire someone less talented than her. Roger discovers LSD and wants more of the heightened insight it gives him. All of this is puncutated by constant background noise. You notice it in every scene, and it's all the more unsettling because it hasn't featured in Mad Men before: the sound of the Manhattan traffic coming through the office or apartment windows; the incessant clacking of typewriter keys. Even out in the sticks at Pete's house, the crickets are deafening. It adds to the feeling of turmoil; the inescapable sense that the times, they are a-changing. 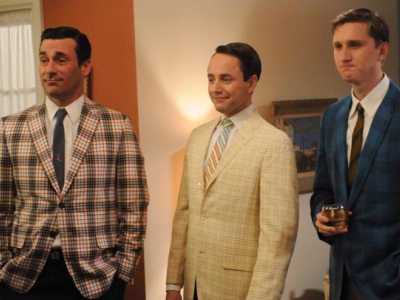 I am TOTALLY getting one of these.

There is no room for Betty any more, it seems, both figuratively and literally. As well as now being fat (a brilliant surprise to spring in the second episode, by the way - nobody saw that coming), she's relegated to a supporting role, appearing in only four episodes out of the 13. In the third part of our pre-season five discussion we thought Megan would have a small role, possibly even not be in it at all, and Betty a larger one but we couldn't have been much more wrong. (It was mainly Ali who thought that.) With Don's newer, younger, hotter wife on the scene, we mainly saw Betty popping up to be frustrated and bitchy, using her daughter to try and drive a wedge between Don and Megan, then sodding off again to eat ice cream.

She's kind of irrelevant now in a sad sort of way: she embraced the ideals of suburban 1950s womanhood just before the 1960s began to swing, and women not tied down with children were just about to carve out a place in a new world full of opportunity. If she was Megan's age she'd be a model, probably scoffing at the idea that she needed to get married in order to give herself stability or happiness. Still, them's the breaks. Now she's been written into a corner where no one sympathises with her, least of all her daughter. 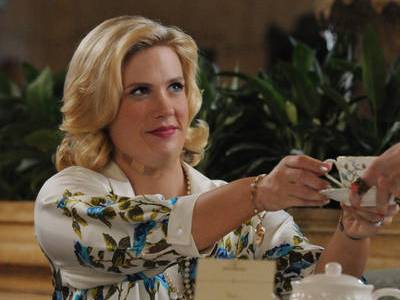 Mad Men has never been big on huge, game-changing moments. I thought it had provided one with Don's murder of an ex-girlfriend in episode 4, which would have changed the entire series irrevocably, but it turned out to be a hallucination sequence. Lane's suicide, however, was one of the biggest traditional twists they've ever tried.

With every character living through such uncertain times, it made sense that something had to give. My only complaint was that it felt rushed: he discovered he owed $8,000 in back taxes, then hanged himself two episodes later. I didn't feel like he was out of options, or that he was even in despair especially, because not enough time had been devoted to showing his unravelling. It highlighted how some characters have been marginalised (Jared Harris only appeared in seven episodes), which makes things tough when they're supposed to jump in with a significant story arc and make it convincing.

That really is my only complaint, too: for a 13-episode season, this run of Mad Men pulled off and maintained a bold switch in pace, throwing pretty much every character into unfamiliar situations, and introducing some new ones who hit the ground running and made a real difference. (Ginsberg in particular is looking like he's going to have a huge impact long-term as Don begins to resent him more and more.) If Don's look in the final shot really does signify a return to his state of normality - namely, getting drunk and chasin' tail - we might come to look back on season five as a strange, wonderful anomaly in the overall course of the series. You know, like when Bobby Ewing was dead for a whole season of Dallas and then came back. Yes, exactly like that.

More:  Mad Men  Jon Hamm  Jessica Pare  Christina Hendricks  Vincent Kartheiser  Elisabeth Moss  Alison Brie  AMC  Sky Atlantic  Netflix
Follow us on Twitter @The_Shiznit for more fun features, film reviews and occasional commentary on what the best type of crisps are.
We are using Patreon to cover our hosting fees. So please consider chucking a few digital pennies our way by clicking on this link. Thanks!