They left New York. They went to Madagascar. Then they ended up somewhere else in Africa. Now they're in Europe, trying to get back home to New York. It's the Circle of Life. No, hang on, that's ... anyway, here's a pleasant surprise: this animated threequel from DreamWorks is a whole heap of fun. What's more, it represents a film's most effective use of the song 'I Like To Move It' by Reel 2 Reel (feat. The Mad Stuntman) since it was first popularised in the work of Truffaut.


It would be easy for DreamWorks to try too hard to emulate what those cocky bastards over at Pixar are doing, but I kind of admire them for sticking to their guns. Not for them those heart-rending acknowledgements of mortality and audacious bids at the Oscars top-table: an animation from the SKG boys is intended to be fun, funny, entertaining for kids, and not much else. Call it a lack of ambition if you like; I call it adherence to animation's true purpose.

With a credo like this usually comes a formula, and Madagascar 3 certainly sticks to the one it established in its first two outings: a bunch of lovably dorky animals try to get to a place, overcoming obstacles on the way. Once again they're trying to get back home, the Central Park Zoo in New York, and decide that going to Monte Carlo in order to persuade some penguins to fly them back Stateside is an absolutely tip-top scheme. Hey, it beats EasyJet. Things go a bit awry, naturally, and the local animal control officer, the Terminator-like Captain Chantel DuBois, begins to pursue them across Europe for trophies. 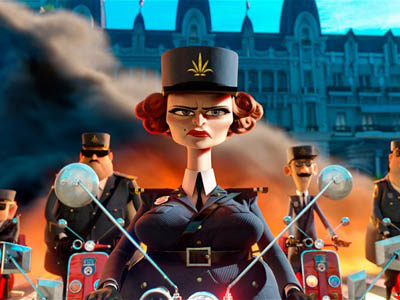 This caption would be much better if I could remember the French for "I'll be back".

This initial sequence moves incredibly quickly, so much so that I had no real idea at the time why they were in Monte Carlo or being pursued. But it turned out this didn't matter in the least, because CHASING. The dizzyingly high-octane chase scene through the streets - and skies - that follows is the kind of visual shot in the arm that would make even the chin-strokiest film critic cross out the word 'MOTIVATION?' on his pad and start grinning like a loon.

They soon need to hop on a circus train to escape, which involves convincing the animals on it that they're performers too. Cue some clowning around, a couple of love stories, the lion having to convince the grouchy Russian tiger of the true meaning of being a circus animal, that sort of thing. All of this is fine in terms of driving it along: we're really just looking not to feel short-changed by the plot and have a few laughs in between the setpiece visual sequences, and there's more than enough to achieve that; even a few laugh-out-loud gags.

But it's the visuals that get you: a wonderfully psychedelic Cirque du Soleil-type sequence in particular, which even manages to transcend the handicap of being set to 'Firework' by Katy Perry. And if you really must have it in 3D, you at least owe your audience the courtesy of making considered use of it, rather than just pasting it on to water splashes and debris-filled explosions. These scenes use it effectively and with forethought: watch out for Gloria the hippo coming straight at you down a drainpipe. 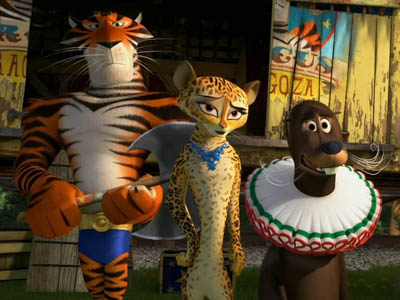 Not sure Seal-O is doing this Thundercats reboot many favours.

My criticisms feel mealy-mouthed, like a guy sneering at a child's ill-decorated birthday cake, but then again that's the kind of thing I'd probably do. David Schwimmer is an odd choice to voice Melman the giraffe and always was: the few lines he gets aren't delivered with any great conviction and the character suffers as a result. And the overall goal of wanting to get home to the zoo is undermined in the third act when they decide it's actually a bit like a prison, which makes sense given how much they've experienced outside it, but leaves you feeling a little cheated that you've come along for the ride.

But that's the kind of talk that gets you nowhere, ultimately: try explaining the vagaries of effective narrative pay-off to a seven-year-old and see how far you get before he just wants to see a zebra with a funny wig on. You shelled out for an enjoyable romp with a bunch of talking animals, and you got more than your money's worth.

More:  Madagascar 3 Europes Most Wanted  Madagascar  Animation  Ben Stiller  Chris Rock  Bryan Cranston  Sacha Baron Cohen
Follow us on Twitter @The_Shiznit for more fun features, film reviews and occasional commentary on what the best type of crisps are.
We are using Patreon to cover our hosting fees. So please consider chucking a few digital pennies our way by clicking on this link. Thanks!