Wow. That was my first reaction upon exiting Man Of Steel. Not necessarily 'Wow' in the sense that I had been overly impressed, but 'Wow' like I had been totally exhausted by the experience and felt so light-headed my brain couldn't quite process words with more than one syllable. Now I've had time for my synapses to cool, I can downgrade 'Wow' to 'Huh': though Man Of Steel is epic in the truest sense of the word, it pummels you so hard with its epicness that you don't have the time or the spatial awareness to notice its flaws. Maybe it's the fact I saw it cold, purposefully not having watched any trailers or promotional material beforehand, but flying blind made for an interesting experience – and dare I say, I perhaps enjoyed it more than others might due to that same lack of preconceptions.


Man Of Steel is essentially the polar opposite of Superman Returns. Where Bryan Singer's spiritual sequel to the Donner movies under-delivered on action in favour of building on Superman's emotional relationships, Zack Snyder's big-budget reboot is happy to draw a line under the Men Of Steel gone by, skimming over character and connection but overcompensating with spectacular pockets of action. Few fans will likely lodge the same complaints they did in 2006; Snyder has delivered a movie that maximises the character's blockbuster potential – his Superman is fast, strong and capable of fucking shit up on a scale which Batman and friends can't ever hope to match.

Like Brandon Routh before him, Henry Cavill is a good fit for Superman but is tested more by the material on his skin than the material in his script. The dude is cut: he's practically triangular. But though David S Goyer's story puts him in the thick of the action more than once, Cavill is rarely required to do any heavy lifting. You'd struggle to remember any iconic lines. You'll struggle to remember any lines, come to think of it. My biggest problem with Man Of Steel is that Clark Kent has precious little time to actually be Superman before he's coming to terms with Zod, the biggest threat he's ever faced (the previous biggest threat being that asshole trucker who threw a beer at his head that one time). 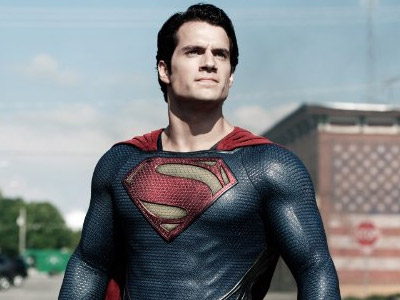 
Despite a 143 minute run-time – and Snyder's love of slow-mo – Man Of Steel still fast-forwards through the non-explodey bits. The opening 15 minutes sees the destruction of Krypton, hardly enough time to get invested in a good book, let alone an entire planet; mankind's first encounter with aliens is glossed over in a few lines, betraying the previous half hour of Kevin Costner's lecturing; plot threads are summarised in seconds by minor characters with surprisingly adept grasps on quantum physics. Michael Shannon has little to do as Zod aside from barking orders to random minions ("Deploy this! Initiate that! FIND HIM!" etc). The forehead-slappingly obvious tension between Clark and Amy Adams' Lois is neatly circumvented, but the spark is snuffed out and Lois is reduced to moving between perilous situations like a particularly sexy chess pawn.

The biggest waste, however, is Russell Crowe as Jor-El, who lacks the gravitas that Marlon Brando afforded, due to the fact that most of his appearance is via the medium of expository hologram. Crowe aims for ethereal transcendence but comes off like Siri with a beard.

Goyer's script leaves little room for any notable character interaction at all – but Snyder doesn't seem to mind. There is one death scene that's handled particularly well, but even that has to take place in the middle of a special effects sequence. Man Of Steel is, like, 99% CGI. There's a shot of Clark unconscious in the ocean early on, and Snyder couldn't bear to leave the frame empty, so throws in a couple of whales. As far as I can make out, at one point Superman must fight a particularly deadly CG special effect. The final sequence, which seems to last around 30 minutes, is so spectacularly, bombastically OTT, at one point I thought Hans Zimmer's drummer was going to have a heart attack. It is gloriously, idiotically, brilliantly excessive. 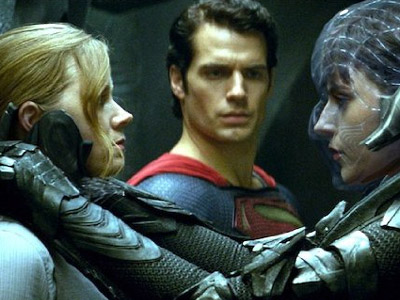 
Man Of Steel is a movie custom designed to let Superman do his thing, and the fight sequences surely will not disappoint. A showdown between Kal-El and Zod's right-hand woman and man-thing – Antje Trau and, I dunno, some guy I guess – has the zip and zoom of a videogame button-basher: all slick special moves, sliding, crouching and throwing things into trucks. Snyder occasionally can't keep the lid on, but it's just nice to see Superman challenged by something that isn't unexpected paternity. The director's love of big, bold, fast-paced action comes at the expense of the pacing and turns the volume down on everything else, but goddamnit, sometimes that's enough for a good time at the movies.

More:  Man Of Steel  Superman  Zack Snyder  Henry Cavill  Amy Adams  Michael Shannon  Laurence Fishburne
Follow us on Twitter @The_Shiznit for more fun features, film reviews and occasional commentary on what the best type of crisps are.
We are using Patreon to cover our hosting fees. So please consider chucking a few digital pennies our way by clicking on this link. Thanks!