It’s just one of those instantly enticing one-word movie pitches, isn't it? Like er... 'Zombeast' or 'Vampirates'. I don’t care if it was written by Rupert Grint, stars 10-years-olds and was filmed on an iPhone, if I know that it features a half-man, half-cyborg, my interest is already piqued. Combine a title like that with an over-the-top retro action poster and I know one thing for sure: I will watch the shit out of Manborg. I would also watch the shit out of Vampirates regardless. Someone please make that film.


And yet, inevitably, I will end up facing crushing disappointment. There aren’t many movie expectations more elusive than the 'so bad, it's good' film. If it sounds like a hilariously bad plot, filmed on a stupidly low-budget and with acting so bad you can see them reading their own lines off screen, it's time to get some mates round, open a few beers and have a laugh, right? Yet, more often than not, you’ll end up with an excruciating viewing experience surrounded by friends all texting each other, trying to come up with an excuse to leave your house. Thank the demon overlords that's not the case here. 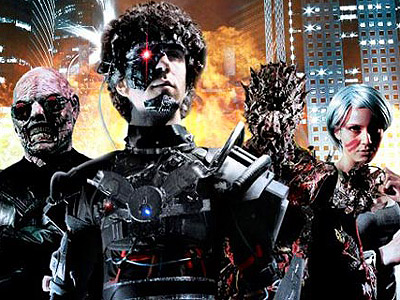 I would give anything for this to be the poster for the new Robocop remake.


Manborg works first and foremost by being genuinely, legitimately funny. It's a deliberate attempt at being bad and awesome at the same time – an actual spoof of 'so bad, it’s good' movies, if you will. Embedded firmly in the niche genre of 80s VHS bargain bin sci-fi, the film is filled with tropes that we can all recognise from better, revered action films, all cheapened to the point of perfect parody.

The film starts with a typically overblown prologue explaining that the legions of hell have risen – led by the tyrannical Draculon – and raging a war on mankind. A soldier who dies on the battlefield reawakens as a half-machine hybrid (when asked his name, the resurrected soldier looks down at his human hand and then his robotic hand: "Man...? Borg...? Manborg.") He finds himself placed in a prison with other captives who are all forced to fight against monsters in a futuristic gladiatorial arena for the enjoyment of the hellish audience. 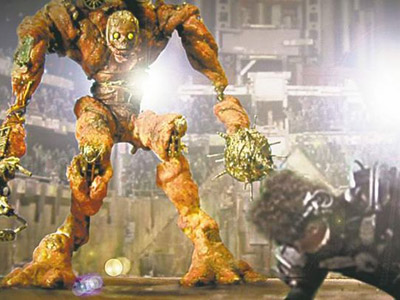 I would watch the shit out of this in real life too.


Surprisingly, Manborg isn't the super-strong hero leading a revolt against the prisoners' captors. He is a dysfunctional creation who doesn't understand why he still exists, with weapons firing haphazardly and making himself a nuisance among his more capable fellow inmates, all of whom are excellent 80s caricatures. Rounding out the group of hero rebel convicts are #1 Man - a martial arts expert deliberately badly overdubbed throughout, Mina – a strong, tomboyish female who attacks her enemies like an anime cartoon, and her brother Justice – a cocky, overtly wacky idiot.

Together they provide ridiculous character moments, but the real standout roles go to Doctor Scorpius, the mysterious, human scientist on crutches helping Draculon, and The Baron, who gets the film’s best moments as the demonic prison chief who suddenly finds himself attracted to Mina and a bumbling fool as a result ("Ooooh, hello! Who's this?" "Prisoner number seven, sir" "Such a beautiful name..."). 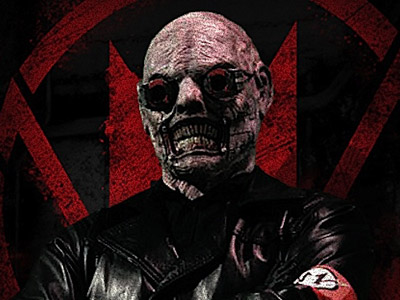 
And, while most of the funniest exchanges are a result of straight-faced spoofing, the film still contains some brilliantly silly gags too, such as Justice having to overcome his own inability to read in order to realise that he can save his sister’s life with a nearby labelled box of grenades: "Alright buddy, just sound it out: G... R... Backwards 3?"

In fact, the film's only shortfall is that the film looks like it had a budget of a few dollars, some scrap metal and an orange. Despite a hugely impressive range of special effects and stop-motion creatures, the film still looks pretty awful in places. To truly do this kind of genre parody justice, you wish it had a budget of the films it is trying to lampoon.

And yet, that’s kind of the point, isn't it? What do you do when your great script has to be filmed on a zero budget? Chalk it all up to being intentional. If nothing else, by its very nature, Manborg has an in-built excuse: Oh you thought it was terrible? That’s the point you idiot. Luckily, it's an excuse the film never really needs.

More:  Manborg  Steven Kostanski  Matthew Kennedy  Adam Brooks  Meredith Sweeney
Follow us on Twitter @The_Shiznit for more fun features, film reviews and occasional commentary on what the best type of crisps are.
We are using Patreon to cover our hosting fees. So please consider chucking a few digital pennies our way by clicking on this link. Thanks!