At the screening of Maniac I attended, some journalist types were talking loudly beforehand about hanging prepositions. They were against them, and didn't care much for starting sentences with 'But', either. I resisted the temptation to interject with my view, which is that these tend to form ugly constructions but that arbitrary prohibitive attitudes towards grammar are the enemy of creativity. I don't want to antagonise anyone, after all. But anyway, Maniac is a film you should give a wide berth to.


I struggled with this. I've only given one single-star rating before, and I told myself I'd reserve them for films that I felt had been cynically made. But as much as it seemed like a film into which the makers had put their heart and soul, I tried and I tried to find merit in Maniac, and I found none. 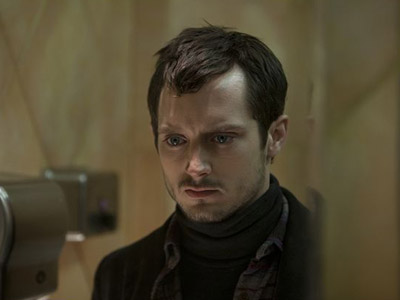 
And I do mean none. If you saw Green Street and thought Elijah Wood was an unconvincing football hooligan, try believing in him as a serial killer. The fault isn't so much his, though: it's down to director Franck Khalfoun and his decision to shoot the film from the lead character's point of view. It's a gimmick, and whenever a film is shot using a gimmick, there invariably comes a point where you get the impression the director realises he shouldn't have committed to it, but has no choice but to press on. In Maniac, that point comes within about 20 minutes. Elijah Wood is the only recognisable star in the picture, so we've got to see him, right? Right. So let's make him look in the mirror a lot. Or sometimes let's just forget about the POV structure entirely when it suits us, voiding the entire concept.

The effect is to leave you feeling cheated. When Wood's about 50 feet behind a girl, chasing her through the subway, we cut to a shot where he's about 20 feet away. Then it cuts back to the longer shot. Then back again. So how far away is he? Or do his eyes have an adjustable zoom function? Doesn't really matter; just go with it. At other times we simply pan away so we're elsewhere in the room looking at him scalping someone. This might be an attempt to convey an out-of-body experience or a possession of some kind, but if so it rings false: there's no supernatural element here. Near the beginning we need to be close up to get the shot Khalfoun wants of the girl whom Wood's stalking down a dark hallway, but we're so close that it's impossible she wouldn't know he was there, and the scene's destroyed. 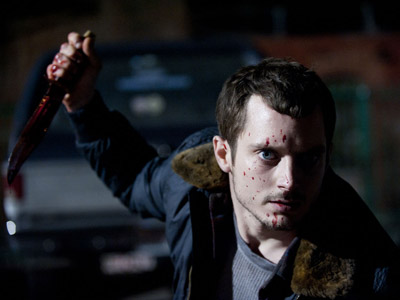 
I say Wood's not to blame, but he has to carry the can at least a little. His performance is absurdly heavy-handed, full of madman-101 mannerisms like constant heavy breathing and whimpering, and he can't decide whether his character's gleeful or tortured when he's killing. The sound mixing does him no favours either: it sounds like most of his dialogue was done with or enhanced by ADR, and the result is that it's painfully separate from the rest of the audio track, making it sound like the voiceover it is and disengaging you further – when the whole point of POV is to draw you in. And there's little attempt made to explore his character other than the odd token explanatory flashback to his promiscuous mother, so in the end he's just a guy who kills women. Who cares? I mean, apart from the women.

Here, I'll say a nice thing about Maniac: Raphaël Hamburger's score is very atmospheric. His name is excellent too. But obviously this can't save the whole thing. See, just like deciding to obey grammatical rules for the simple sake of it, this is the problem with setting your stall out to do a film in POV, or as one continuous shot, or with Bruce Willis as a ghost all the way through. You're painted into a corner but you have to stick with it – even if you know it's ruining it.

More:  Maniac  Elijah Wood  Nora Arnezeder  Horror
Follow us on Twitter @The_Shiznit for more fun features, film reviews and occasional commentary on what the best type of crisps are.
We are using Patreon to cover our hosting fees. So please consider chucking a few digital pennies our way by clicking on this link. Thanks!