Despite success on the festival circuit and early talk of Oscar buzz, Martha Marcy May Marlene has found itself released in the UK on the busiest weekend of the year so far – sharing screens with Young Adult, Carnage, Chronicle, Man On A Ledge, Journey 2: The Mysterious Island and, of all things, Jack & Jill – without so much as an Oscar nomination to its name. It'd be a tragedy if such a delicate movie was left shattered by the elbow-swinging of the annual awards season rush: Martha Marcy May Marlene might not have campaign funding or grandstanding performances, but it has heart and soul, two qualities which are slowly corrupted throughout for your viewing pleasure.


Just as the characters of Shaun Of The Dead never dare mention the 'z' word to deny the inevitable realisation that they really are in the middle of a zombie uprising, no one in Martha Marcy May Marlene ever refers to the 'c' word. For all the talk of 'communes', 'communities' and 'families,' Elizabeth Olsen's wayward youngster Martha has found herself in inducted into a cult. Her story starts with this realisation: Martha darts through the woods, away from charismatic leader Patrick (John Hawkes) to the relative safety of her sister's middle-class home. Her pursuers may have let Martha escape, but she proves far from free of their corroding influence.

Destined to be introduced as the younger sister of Mary-Kate and Ashley (fashion mavens and stars of my wife's proposed – and declined – double-bill suggestion, New York Minute), Elizabeth Olsen may not have to carry that millstone around her neck for long if Martha Marcy May Marlene is anything to go on. Olsen's performance is 99% under the surface; upon her 'rescue', Martha claims to be fine, but it soon becomes clear she's anything but. She talks, albeit in clipped sentences; she laughs; she hugs. She's not mad. She's just gone wrong. As the film fragments between Martha and her time as cult alter-ego Marcy May, reflecting her fractured psyche, Olsen's portrayal of girl torn in two is expertly underplayed and internalised, those doe eyes a window into a twisted soul. 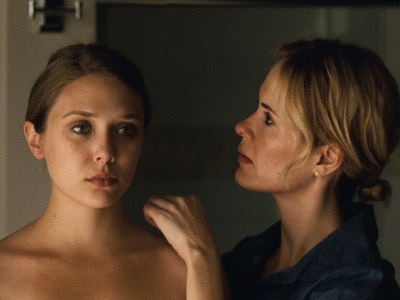 
If Olsen is the movie's beating heart, then John Hawkes is the cancer that slowly consumes it. A character actor of little compare, you may previously remember him from Winter's Bone, Contagion or even as Kenny Powers' brother in Eastbound & Down. Yeah, now you'll remember him from this. Figurehead Patrick is the quiet, gliding head of the community; on first impression an easy-going, palms-down sort – all 'Kum ba yah' and 'Hey, help me churn this butter, yeah?' On further inspection, he proves to be an insidious, malevolent force: a representation of why you never go wandering in the woods alone. Even scenes without Hawkes in them hum with the potential menace of his return.

One simple scene, shared between the two characters, is mesmerising. Patrick sits in front of his followers, strumming on his guitar a new ditty named 'Marcy's Song' as Martha/Marcy May sits, her gaze fixed on Patrick throughout, utterly spellbound. Hawkes, in one unbroken shot, sings and plays the entire song flawlessly. By its end, you half understand why his audience find him so captivating. 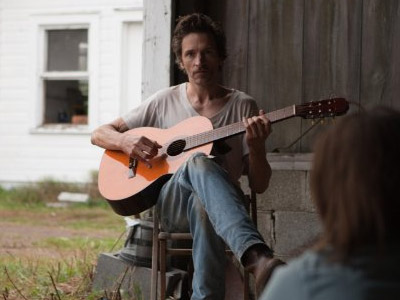 "This next song is one I call 'Chico Time'"


That's about as showy as Martha Marcy May Marlene gets, save for a few clever transitional shots, Martha's twin personalities bleeding into one another. Olsen gives a brittle but fearless performance, if not quite as robust as Rooney Mara in Dragon Tattoo, then certainly its equal in nuance. Watching her slowly succumb to crippling paranoia and madness is to witness a star being born – just be thankful this Olsen went off the rails on screen and not off of it.

More:  Martha Marcy May Marlene  Elizabeth Olsen  Sean Durkin  Sarah Paulson  John Hawkes
Follow us on Twitter @The_Shiznit for more fun features, film reviews and occasional commentary on what the best type of crisps are.
We are using Patreon to cover our hosting fees. So please consider chucking a few digital pennies our way by clicking on this link. Thanks!