Since Maudie is a film whose hat hangs largely on its two main performances, and since the critics on the posters are starting to talk about Oscars for them, let's have a word about performances and whether there's any value in qualifying them.


Maudie is a nice affair: she's quirky but not annoyingly so; he's surly and uncommunicative and learns to be less so through meeting her; an unaccepting world comes to embrace her because it's charmed by her art; the end. It's quintessential festival fodder with a dreamy coastal setting, a gentle narrative nudge rather than a thrust, and it's got a couple of dogs in it. Slap it straight on at a provincial Picturehouse Silver Screen club on a Tuesday afternoon with a free cup of tea and a biscuit and a really helpful young usher who shows you to your seat.

Now: there's a lot of chat on the posters along the lines of Sally Hawkins having given "an Oscar-worthy performance" and Ethan Hawke delivering "one of the performances of his career", and every time I walk past one on the tube I think a bit about what that means, and whether these ideas can properly act as markers for performance quality. Then I get distracted by Twitter or an advert for sausages or something. But later I might start thinking about it again. 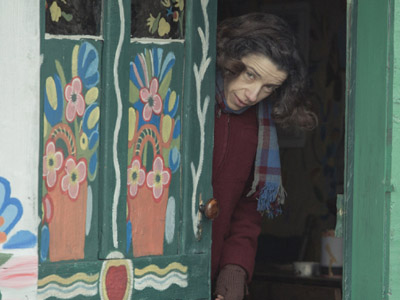 "Hello ma'am, it's your Ocado delivery of arch headgear and quirky animal-shaped paraphernalia."


The obvious starting point is that performance quality could be viewed as something which defies measurement. People point to good and bad ones as matters of almost empirical fact – the merits of a film are subjective; there is usually less disagreement on the merits of a performance – but qualifying this is harder. Did the actor say a line in a certain way, move their eyes at just the right time, laugh a bit too hard?

Both Hawkins and Hawke are very good in Maudie, and if you're looking to qualify it you'd arrive first at the fact that they both effect physical transformations of a sort: she a stoop and arthritic hands as she ages; he the sense of being a much more imposing physical presence than he's ever seemed before. This is a flag often raised as emblematic of performance quality, almost as a reward for the effort it must have taken to achieve it (see also: actors who went through physical hardship for a role get extra points). This might equally be argued as an achievement in make-up, cinematography or production design (they both grey and wrinkle convincingly, and the tiny house they live in, coupled with her short stature and the angles from which he's shot, make Hawke look bigger than he is) but it's enough to put points on the board. The fact they're playing real people never hurts, either.

There's also the question of "chemistry", which is a vague notion intended to convey that two actors are adept at seeming like they know each other well or are demonstrably in love. Maudie is less a story of love than it is of mutual tolerance; two people gradually accepting each other's flaws and quirks (and a flaw of his is at one early point unforgivable, something I struggled to shake off). This sense is what's best about it: that coupling isn't necessarily a process of infatuation followed by ups and downs, but sometimes a decades-long treadmill of almost grudging settlement into one another's company, with affection barely ever expressed, and that this profoundly un-Hollywood rendering of it is validly cinematic. 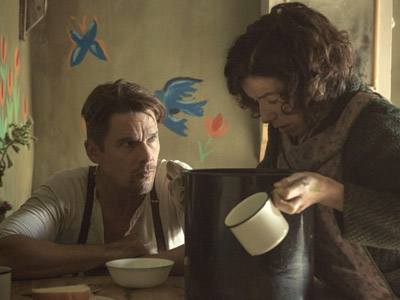 Hawke and Hawkins. Just out of shot: Stephen Hawking and skateboarder Tony Hawk. And a hawk.


The very idea of measuring the quality of an acting performance is perhaps more to do with marketing than it is an appreciation of art. When awards season – an industry invention designed to sell films – looms you end up with the idea that a performance is either "Oscar-worthy" or not, much in the same way that a footballer is or is not considered "world-class": they are nebulous concepts, imposing a bar to be reached even though there is no way to quantify it.

Since we're indulging and working within the parameters of this bar, if you want my opinion Hawkins' performance is Oscar-worthy but Hawke's is not. I thought his gruffness a little too caricatured. But I only judge within this framework because this arbitrary measure has been imposed, and maybe in the end it's a useful way to guide your thinking about a performance. Give me a sec, I'll plot all the performances I've ever seen on a graph. Wait, where are you goi

More:  Maudie  Aisling Walsh  Sally Hawkins  Ethan Hawke  Kari Matchett  Zachary Bennett  Gabrielle Rose
Follow us on Twitter @The_Shiznit for more fun features, film reviews and occasional commentary on what the best type of crisps are.
We are using Patreon to cover our hosting fees. So please consider chucking a few digital pennies our way by clicking on this link. Thanks!