The trailers for Tarsem Singh's lavish interpretation of Snow White And The Seven Dwarfs totally sell the film short, filled with cheap puns, singing and dancing. On this evidence, the grittier Lord Of The Rings-esque Snow White And The Huntsman - due out in June - looked set to leave its colourful rival out in the cold, dark woods. Don't be put off just yet. On closer inspection, Mirror Mirror might just be the fairest of them all: an utterly delightful and faithful re-telling of the classic fairytale – a dazzling treat for the eyes from start to finish.


As the story goes, the vain Evil Queen (Julia Roberts), jealous of the beautiful Snow White (Lily 'daughter of Phil' Collins), banishes her step-daughter to the forest, paving the way for her to get her wicked feet under the table with the dashing, wealthy Prince Andrew Alcott (Armie Hammer). After Snow befriends seven resourceful dwarves, she sets about her plan to overthrow The Queen, reclaim her birthright as ruler of the Kingdom and win the heart of the dapper Prince. 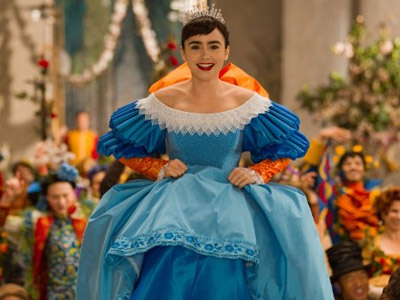 
As the title suggests, Mirror Mirror focuses more on the story of the Evil Queen than that of Snow White. Good job then, that Julia Roberts is wonderfully charismatic and suitably eccentric in the role. Playing her as more insecure than evil, there's a vulnerability to her; despite being a dictator and ruling over the oppressed kingdom with an iron fist, she's still a relatable character who simply fears growing old and getting ugly. Roberts brings appeal to a role that could've so easily been a stock villain, and after the flops of Larry Crowne and Eat, Pray, Love, she needs a hit.

Although the spotlight falls on Roberts, Lily Collins still manages to shine as Snow White. Impossibly adorable and equally enchanting, she's as at home in a ballgown as she is in a sword fight - truly the personification of a Disney Princess. Armie Hammer's debonair prince - with his large stature, Billy Zane-sounding voice, confident presence, prominent jaw line and feathered hair - is perfectly at home in a role he was born to play. 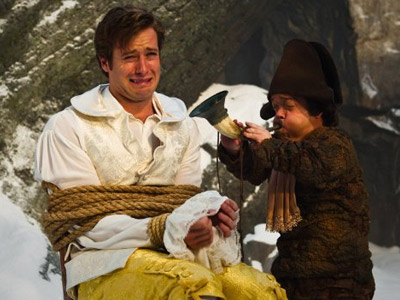 "Only my identical twin brother can save me now!"


However, it's the iconic dwarves who run away with the film. Re-invented as quarrelling lawless bandits who rob passing travellers, they're a far cry from the hi-ho-ing miners we're so familiar with. With their own individual defining characteristics and unique attributes, they're an absolute joy to watch, and admirably, not once are they used as a cheap punchline. The entire cast look as if they're having an absolute ball and it's impossible not to get caught up in their enthusiasm.

At its heart, Mirror Mirror is an engaging, coming-of-age yarn; a huge amount of fun, packed with plenty of sly, self-parodying jokes that unlike Shrek, are used sparingly and effectively. With its vibrant use of colour and a palpable feel-good factor, Mirror Mirror really is a Disney animation made of flesh and blood. Judging by this, Tarsem should surely be the go-to-guy for any future fairytale adaptations - and Kristen Stewart's Snow White has more to worry about than the Huntsman.

More:  Julia Roberts  Lily Collins  Mirror Mirror  Tarsem Singh  Snow White
Follow us on Twitter @The_Shiznit for more fun features, film reviews and occasional commentary on what the best type of crisps are.
We are using Patreon to cover our hosting fees. So please consider chucking a few digital pennies our way by clicking on this link. Thanks!