It seems quaint that there was an ever an outcry about the 'death' of traditional hand-drawn animation when you watch a movie with such beautiful artistry as Moana. John Musker and Ron Clements did more than most to keep that medium alive, with classics like The Little Mermaid and Aladdin on their resumes - they even tried to bring back 2D animation with 2009's The Princess And The Frog, a good-intentioned throwback to the old ways. But when the sun sets on Musker and Clements' jaw-droppingly beautiful CG adventure Moana, no one will be mourning those outdated techniques. It is a film so vibrant and luminescent and immersive that it is impossible to argue that the future of animation isn't in good hands. Though its storytelling is a touch too familiar to qualify as a true modern classic, Moana is nonetheless a relentlessly entertaining spectacle that's rooted in authenticity and has a talent pool so deep you can swim in it.


This isn't your slightly older sister's Disney Princess movie. Yes, Moana features a young woman keen to find herself. Yes, she sings songs about finding herself. Yes, she has animal sidekicks. ("Then you're a princess," jokes Dwayne Johnson's demigod co-star Maui). That's just about all she has in common with a wet fish like boy-crazy, traitor-to-her-species Ariel. Though she embarks on your bog-standard adventure of enlightenment and empowerment, featuring a colourful cast of characters and life lessons to be learned along the way, Moana is the kind of modern female character you want being shoved into the retinas of impressionable youngsters. Who has time for a love interest when there are cool skills to be mastered and a whole world to explore? Moana is an easy character to like and newcomer Auli'i Cravalho imbues her with warmth and compassion. 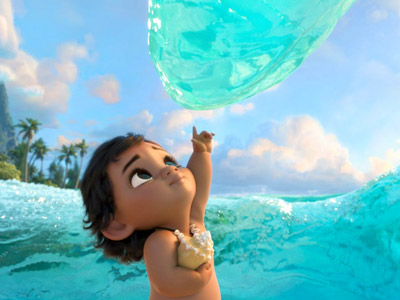 TOUCH IT LIKE YOU TOUCHED MY HEART, SWEET PRINCESS


Dwayne Johnson, meanwhile, plays the challenging role of a Polynesian demigod with super strength and charisma up to his eyeballs: what a challenge for him. Maui is an interesting foil for Moana; he's not an entirely sympathetic character but is one with boundless energy courtesy of the most electrifying man in sports - and, in fact, all - entertainment. The two leads are blessed with hook-sharp dialogue from Jared Bush (Zootropolis) and Taiki Waititi, plus a selection of stellar songs from circle-walking historical rap actor Lin-Manuel Miranda. Tunes like 'You're Welcome' and 'How Far I'll Go' are so catchy they burrow into your cerebral cortex like musical weevils and lay little eggy bubbles of joy in your ears. But in a nice way. And hey, if you're only here for Jemaine Clement doing an impression of David Bowie by way of a 50-foot jewel-encrusted crab then that's cool too.

As with Zootropolis and indeed all Disney animations of late, the real stars are the unsung talented visual artists who bring these worlds and their characters to life. Oh, for a VR helmet and an hour wandering around the tropical island of Motunui - you can practically feel the sand between your toes. By far the trickiest element of Moana to nail was the fact that the ocean itself is a character, frequently taking the form of an Abyss-like tendril that keeps Moana safe, but the artistry involved in anthropomorphising something as complex as water is mind-boggling. It sounds bizarre out of context, but there is a scene where Moana's animators effectively characterise the ocean as being exasperated with a chicken. You couldn't do that with pen and ink.

More:  Moana  Disney  Dwayne Johnson  John Musker  Ron Clements  Rachel House
Follow us on Twitter @The_Shiznit for more fun features, film reviews and occasional commentary on what the best type of crisps are.
We are using Patreon to cover our hosting fees. So please consider chucking a few digital pennies our way by clicking on this link. Thanks!