For a pigeonholed Hollywood star, performing a dramatic volte-face and stubbornly refusing to take on the types of project for which you're famous can't be easy. Our relationship with stars is tied up too fully in the idea of recognisable archetypes to make it so. Planning on casting Ray Liotta as a romantic leading man any time soon? Nope, but we've got an opening for a crooked cop if he's interested. So what Matthew McConaughey has achieved in the last couple of years is truly remarkable: to graduate from lightweight romcom go-to-guy to one of the most magnetic screen actors around.


I know, right? Matthew McConaughey. Historically less an actor than a first-rate set of abdominal muscles that happened to have a head attached. It seems only yesterday that the procedure for losing him in ten days was being impressed upon me, and yet here I am, marvelling at his screen presence. And his abdomen, obviously. 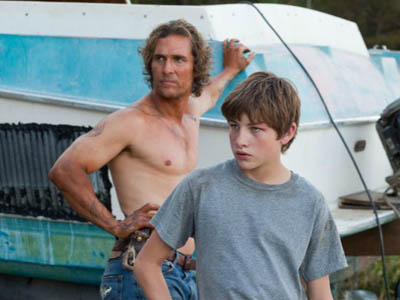 Tye Sheridan in clear breach of the 'no-abs-obstruction' clause in McConaughey's contract.


It's notable too that Mud's writer-director Jeff Nichols, following up 2011's excellent Take Shelter, recognises this enough to build the film around the idea of his star as an enigmatic figure. There's enough preamble before our first glimpse of McConaughey to make this clear: first we meet Ellis and his friend Neckbone (Tye Sheridan and Jacob Lofland), two teens in a rural Southern town who find a boat in a tree on a small island. Living in it is Mud, a mysterious drifter with a knack of conducting entire conversations without ever removing the cigarette from his mouth. When he tells them he's waiting for his girlfriend Juniper (Reese Witherspoon), and how much in love with her he is, they agree to help him out.

The main arc here is Ellis's, who with his parents nearing divorce seems to be looking for a solid example of love as a template. Not finding it at home, he looks for it with an older girl at school, but that he doesn't understand how it works is obvious. It's not just this disillusionment that makes him want to help Mud, even after he finds out he's a fugitive from justice; there's also the natural strength of a boy's curiosity, and this idea of embarking on a journey as a teen to fill a void at home is flecked with shades of Stand By Me. 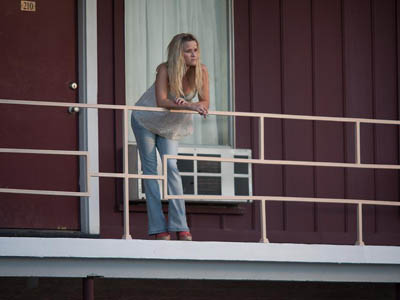 Reese without a spoon. I know she's not eating anything, but that's scarcely the point.


The two principal child actors are excellent, but there's no doubt it's McConaughey's film. Over the course of his last few outings he's morphed into a sort of contemporary Jack Nicholson figure, with drawled speech and a brooding intensity that's recognisably his own. But like Nicholson he's also capable of maintaining these performance signatures while losing himself in the role and avoiding caricature or self-parody. Mud the character hovers just on the edge of menace, with a wistful romanticism and a childlike energy thrown in, and the hint of secrets lurking below the surface, just like the river he's living on. The now-standard tracking shot of the river seen in the trailer is enough to make the metaphor clear.

Through this and Take Shelter, Jeff Nichols has shown a flair for teasing out the darkness of American small-town life, and reaping standout performances from his male leads. As little as I like defining quality by awards, it's hard not to feel that Mud is a step along McConaughey's likely path to an Oscar, especially when you see the weight he's lost to play an HIV sufferer in the forthcoming Dallas Buyers Club: an obvious awards tilt. I just hope he hasn't lost the abs.