It's difficult to know where you stand with Never Let Me Go. It's dystopian sci-fi, yet it's set in the recent past, not the future. There's a timeless quality to the film: it could just as easily be the 1960s as the '80s or '90s - how many sci-fi films are there where the protagonists look like they've tumbled out of a 2-for-1 jumper sale at Oxfam? - but at the same time, it taps into something very contemporary. It contains by no means a far-fetched concept; the technology and knowledge exist to make what happens in this movie a reality. At some point the ethical barrier holding us back will crumble, and then what?

The film follows the formative years of three friends, Kathy, Tommy and Ruth at Hailsham, a secluded boarding school. Their existence seems idyllic at first glance, but there's something not quite right; an eerie sense of foreboding that oozes from every frame of the film. They do not have surnames, simply initials; they have electronic tags they must swipe as they enter buildings; visitors to the school treat them with suspicion; they have lessons on how to behave in cafés to prepare them for them for the outside world. 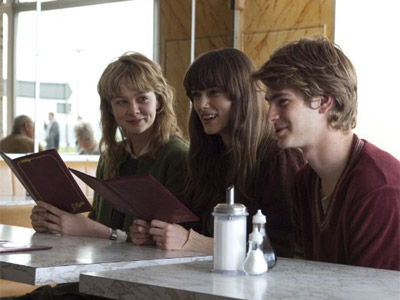 
Strangest of all, no reference is ever made to the children's families and the teachers at the school are referred to as 'Guardians'. Miss Lucy (Sally Hawkins), a new Guardian at the school, is clearly very uncomfortable with the Hailsham set up, and lets a little too much information slip to her pupils, accelerating their realisation of who they are and the fate that awaits them.

Skip ahead a few years and Kathy, Tommy and Ruth have grown up to become Carey Mulligan, Andrew Garfield and Keira Knightley. As well as the great big science-fiction elephant in the room, they have to deal with typical growing up stuff. Despite the fact that Tommy and Kathy share a natural affinity, it's Tommy and Ruth that get it on, leaving Kathy out in the cold. They leave Hailsham for the next phase of their lives, a brief taste of freedom, and after years of stolen glances and suppressed feeling, Kathy and Tommy finally get a shot at happiness. But by then the dark final chapter has set in - and it's shattering, heartbreaking stuff.

Given that Never Let Me Go is directed by music video genius Mark Romanek, boasts a screenplay by Alex Garland (itself based on a massive bestselling novel by Kazuo Ishiguro) and has stunning cinematography from Adam Kimmel, it's a total mystery why it has been overlooked by all the major awards this year. It's a fairly faithful adaptation of Ishiguro's book (though the childrens' early days are cut down), but fans of the book won't find much to quibble about. Mulligan is the perfect choice for Kathy and her performance has been very unfairly overlooked by all. 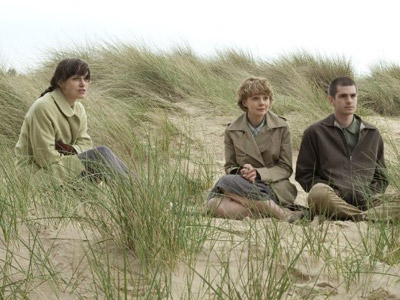 Now that is some goddamn impressive sitting.


The film belongs to Mulligan, her wise-beyond-her-years voice navigates us through the film in a well-judged narration As in An Education, she combines strength and vulnerability, naivety and wisdom. Hats off to whoever found Isobel Meikle-Small to play the young Kathy, because she bears an uncanny resemblance to Mulligan, more than a little unsettling in this context.

Knightley isn't overly annoying, that's all I can muster on that score. She's outshone by Mulligan and Garfield, and her hair is quite bad. It is only in the final stages of the film that Ruth becomes more sympathetic; up until this point, she is often smug, jealous and manipulative. It's through Garfield's character that the sense of injustice at the heart of the story is felt most keenly. He is the one who gets angry and seeks a way out; the others stoically accept their fate. Garfield is a bundle of contained rage, which occasionally bursts out in some of the film's most moving scenes.

Never Let Me Go creates its own universe, at once adrift from the world we inhabit yet eerily familiar. At its core is a sickening silence. It leaves you with a head full of existential questions and ethical dilemmas. What happens to Kathy, Tommy and Ruth is essentially what happens to all of us, but we busy ourselves to drown out the sound of the ticking clock. What makes us different to the Hailsham kids? Are we different? Is ignorance bliss? Is it better to have loved and lost than never to have loved at all? And just how far will we go to drown out that insistent clock?

More:  Never Let Me Go  Carey Mulligan  Keira Knightley  Andrew Garfield
Follow us on Twitter @The_Shiznit for more fun features, film reviews and occasional commentary on what the best type of crisps are.
We are using Patreon to cover our hosting fees. So please consider chucking a few digital pennies our way by clicking on this link. Thanks!