New Year's Eve; the one night of the year when you feel obliged to have fun, but if truth be told, you usually can't be arsed. Fittingly, that's how Garry Marshall's follow-up to Valentine's Day makes you feel.


Rounding up an admittedly impressive all-star cast, we endure the joyous chore of following numerous, no doubt wealthy couples and singletons around The Big Apple on New Year's Eve through a series of intertwined, loved-up melodramas, each one more sickening and implausible than the last. They're probably having more fun than we will on December 31st too.

Okay, so we've got Hilary Swank in charge of the Times Square ball-drop, Katherine Heigl catering the city's biggest party as Jon Bon Jovi delivers 'a shot to the heart' (HURRR) as her ex and the party's headline act (he's a rock star, obviously). Meanwhile Lea 'Glee' Michele is one of his back-up singers but gets stuck in a lift with a grumpy Ashton Kutcher, while his best friend Zac Efron and his immaculate hair whisk Michelle Pfeiffer's quirky/suicidal spinster around the city on his scooter, fulfilling all her New Year's resolutions (steady). 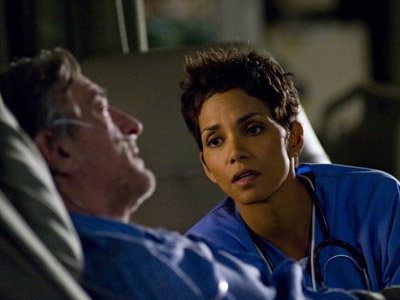 
On the other side of town, Jessica Biel and Seth Meyers are hoping to give birth to the first baby of 2012, competing with Til Schweiger (hello European market!), whilst a cancer-ridden Robert De Niro, being looked after by Dr. Cary Elwes and nurse Halle Berry, is hoping to see the Times Square ball-drop just one last time. Phew, you followed all that, right? Good, because that's not even the half of it.

You'd think with this overwhelmingly crowded cast and all these mini adventures going on there might be at least one in there to tug on the ol' heartstrings. But save for perhaps the odd touching moment, like Halle Berry's teary Skype call to her husband in Iraq, everything else plays out in a Richard Curtis-esque, far-fetched, Love Actually kinda fashion.

Marshall's vision of New York is like some kind of alternative fairytale universe where every attractive person in the city knows each other, the biggest problem you're going to face on New Year's Eve is who to kiss at midnight and the whole city over-reacts to the famous Times Square ball-drop malfunctioning as if it is literally the worst thing to ever happen to the city of New York. 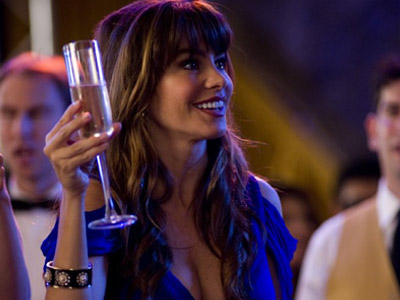 Just to warn you, I will be looking down your, er, down your top there.


The city might look spectacular here, but it's certainly not realistic. What we're not shown is the tens of thousands of people crammed into Times Square grumpily trying to hail a taxi at the end of the night, or drunken party guests negotiating the New York subway at two in the morning, which I can assure you, is a tricky undertaking. Not nearly enough vomit.

Garry Marshall does a decent job connecting everything so effortlessly with twists, turns and double-bluffs, but any charm is totally out-weighed by the sheer ridiculous schmaltziness of it all. The less said about the lingering shot on the Sherlock Holmes: A Game of Shadows poster, the better.

Your mum and her friends will probably lap this up but the rest of us may as well resign ourselves to Jools' Hootenanny instead and patiently wait for 2012.

More:  Garry Marshall  New Years Eve  Robert De Niro  Halle Berry  Ludacris  Jon Bon Jovi  Festive Schmaltz
Follow us on Twitter @The_Shiznit for more fun features, film reviews and occasional commentary on what the best type of crisps are.
We are using Patreon to cover our hosting fees. So please consider chucking a few digital pennies our way by clicking on this link. Thanks!