Football is a hard sell. Ever tried to get a non-football fan into it by showing them a game on TV? "Look, I know it's still nil-nil after 70 minutes, but this game is poised to burst into life any second! Look, that Stoke player just got booked for simulation! It's about to kick off now!" But amidst all the play-acting, the bus-parking, the scandals, the hookers, the sky-high wages, the sponsorship deals, the adverts and the hair transplants, there are two things that outsiders rarely appreciate about football: the passion found in the players who truly enjoy the sport, and the breadth of its appeal. Show that same non-fan new documentary Next Goal Wins, and I guarantee that by the final whistle they'll have a new-found appreciation for the beautiful game.


Steven Gerrard crying at the final whistle of Liverpool vs Manchester City is passion personified: a player who has trained his whole life finally getting within shooting distance of the ultimate and only prize that has eluded him in his career. Crucially however, passion does not go hand in hand with quality. At the other end of the spectrum you'll find the American Samoa national team, a ragteam team of no-hopers and part-timers who have never won a competitive game in their entire history (including a record 31-0 loss to Australia) but who still lace up their boots and smile as they take to the pitch anew. These players - these useless, terrible players - display a very real love for the community spirit and the camraderie which football allows, and Next Goal Wins taps into that good feeling to winning effect.

The storybook tale of American Samoa is an underdog archetype: I'm amazed this hasn't already been made into a TV movie starring Emilio Estevez. With morale at an all-time low and World Cup qualification looming, FIFA post the Samoan managerial position on their bulletin board and only one man responds: Thomas Rongen, a Dutch-American coach with experience in Europe and a voice like Woody Allen speaking at half speed. Next Goal Wins follows Rongen's attempts to whip the American Samoans into shape for the 2014 World Cup, but it's not so much about the quest for results as it is finding out what drives these players to keep going. 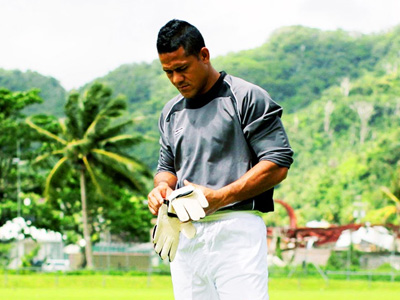 "Maybe I should start wearing these things."


It's initially hard to feel sympathy for the Samoans; on the surface, the team live in an island paradise, laughing and training in the shadow of mountains. Football is a way of life for these people, but not just in the 'I'm lagered up at West Ham every Saturday at 3pm until I die' type way you get over here; rather, the only other way off the island of American Samoa is military enlistment. Theirs is a true community spirit: they survived a 31-0 drubbing by the Aussies but that's nothing to surviving the tsunami.

Next Goal Wins cherry-picks a selection of the more colourful players and backroom staff members; among them are goalkeeper Nicky, who still has nightmares of conceding more than thirty goals in one game; coach Larry, who's desperate to find small victories ("They needed eight goals, we gave them seven - that's a step!"); the transgender player Jaiyah, one of American Samoa's 'third gender', who makes her way into the starting eleven. (The other players accept Jaiyah without question, meaning Next Goal Wins is mercifully and refreshingly free of gender-based moralising).

It's new manager Rongen who is the movie's star player, however. At first he's a no-nonsense ball-buster, permanently exasperated by his team's consistent ineptitude. Given time to adopt to the island's ways, Rongen eventually relents and reveals his own reasons for being so driven. By the time the movie ends and his short-term contract is up, you get the feeling that Rongen really would relish a return to American Samoa instead of some comfortable mid-table posting somewhere in Europe. It sure beats managing Aston Villa, anyway. 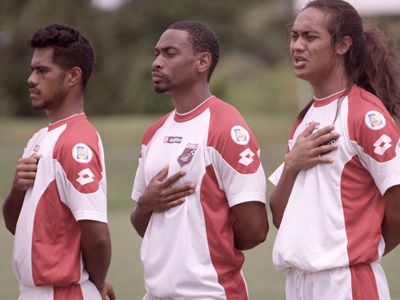 Martin O'Neill would transform these no-hopers into 14th place contenders.


The action is perked up with a soul soundtrack - a football documentary requisite: see also Once In A Lifetime - and it's well paced and lively throughout. There is a suspicion that the editing on match days is a touch too clinical - when the team are playing 'well' you see only good bits, ditto the reverse - but the fact is, you can't cut round an underdog story as good as this; it's as Clive Tyldsley is so fond of saying: "If this were written in a script, no one would believe it!" When it comes to squeaky bum time, there is no need for directors Mike Brett and Steve Jamison to create any artificial tension. Football. Bloody hell. Etc. Next Goal Wins certainly doesn't disappoint in the dramatic department.

Time and time again, you come to realise that football is bigger than goals and games and titles - it's about passion. It's genuinely quite difficult watching grown men cry over something they love - just try telling them it's "just a game" - and Next Goal Wins does a bang-up job in underlining what football can teach us about ourselves. You're left with an abiding sense of goodwill, that the sport has done more good around the globe than any diving player or sexist commentator can undo, and that it truly isn't the winning that counts but the taking part. Which, for an English football fan, is quietly reassuring.

More:  Next Goal Wins  Football  Documentary
Follow us on Twitter @The_Shiznit for more fun features, film reviews and occasional commentary on what the best type of crisps are.
We are using Patreon to cover our hosting fees. So please consider chucking a few digital pennies our way by clicking on this link. Thanks!