There's an uncomfortable undercurrent to Dan Gilroy's seedy thriller Nightcrawler that I didn't quite identify until after the credits had rolled and the stank had worn off. The tale of a grim opportunist named Lou Bloom (Jake Gyllenhaal) who weasels a career out of being the first lens on the crime scene, Nightcrawler is equal parts slick and sick, portraying the denizens of the neon-soaked Los Angeles nightlife as creepy-crawlies squirming under a rock. It's Gyllenhaal's unforgettable creation, however, that sticks in the memory: with bug eyes, sunken cheeks and a moral barometer on the fritz, I eventually realised that Lou Bloom is to paparazzi what Tony Montana is to gangsters - a totemic figurehead that suggests all you need to succeed is an excess of motivation and an absence of conscience. Filtered through this lens, Nightcrawler becomes the scariest movie you'll see all year.


Lou Bloom is one of the more frightening movie creations in recent memory, not because he's a Travis Bickle-esque psychopath, but because his psychopathic tendencies are kept under such close control, hidden beneath a smiley veneer and a rational outlook. Bloom speaks the language of LinkedIn: he's an unholy cross between Patrick Bateman and an Apprentice candidate, the result of which is rather more like Tom Cruise than you might expect (even the top-knot seems familiar). He bears an expression not unlike that of a man being suddenly disturbed by torchlight in a graveyard.

Every single misdeed Lou executes is under the guise of career development, including but not limited to: lying, stealing, assault, screwing over enemies, cutting competitors' brake cables, withholding evidence, rearranging family photos closer to bulletholes and moving dead bodies into better light to make for more evocative imagery. Put simply, he is the kind of smirking moral vacuum you could imagine running TMZ in a couple of years. "What if it's not that I don't understand people," he tells his partner, "It's just that I don't like them?" A lack of compassion is a job requirement in this business. 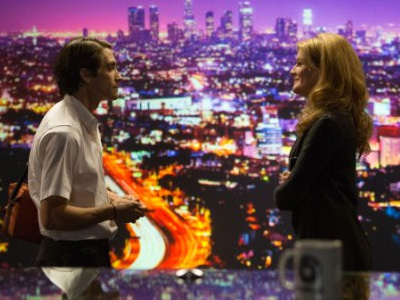 Welcome to Channel 6 news, where our anchors ignore you ALL night


Gyllenhaal has done a magnificent job transforming himself inwards, thinning out those film star looks until he resembles an unmasked Scooby Doo villain; greasy hair and open shirt, pale skin and hollow cheeks, bags beneath the eyes but nothing behind them. In other words, it's a very un-Gyllenhaal performance, except for when Lou flashes that megawatt smile (a grin which you suspect has more teeth than any human should actually own). It's performances like this which has seen Jake Gyllenhaal become your new favourite actor without you even realising it: a minor McConnaissance, if you will.

At times, it seems like Dan Gilroy doesn't know what kind of movie he wants Lou to live in. Tonally Nightcrawler bounces back and forth like it isn't quite sure whether to laugh along with Lou or denounce him for his actions; James Newton Howard's score features a number of odd musical choices, flitting from goofy music beds befitting a Robin Williams comedy to dramatic synths à la Clint Mansell's Drive. The upside to this is, like Lou himself, the world of Nightcrawler truly feels like it's a little bit mad; like it's been awake all night and is running on caffeine. You never see Lou sleep. I wouldn't be surprised if you never see him blink.

The problem with Lou being up all night to get lucky is that the movie suffers when he's not on screen. Riz Ahmed is unrecognisable as Bloom's sidekick, sporting a flawless Californian accent, but the few scruples he does possess mark him out as being less interesting than his boss; meanwhile, Rene Russo as a fading news producer has the most clichéd role of the bunch, half-heartedly stomping around and screaming about ratings to weak effect. She is at least up front about her racial and class bias ("The angle is urban crime creeping into suburban neighbourhoods") but you yearn for the return of Lou's Addams Family stare. 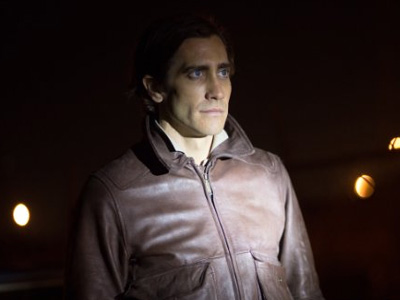 
Nightcrawler is better served when it stops pointing fingers at the media in general and instead concentrates on getting inside the minds of the individuals who serve it. Anyone who's seen TV or been online in the last five years knows the ghastly state of entertainment news; we live in a world where a site like Gawker had the gall to claim the moral high ground in refusing to honour the request of a little girl who didn't want the world to see footage of her comedian daddy being pulled from the wreckage of a car crash. Backstabbing is par for the course. The vultures are always circling. Echoes of the death of Princess Diana are still routinely ignored. This is an industry populated exclusively by Lou Blooms. The morbid fascination is with the man, not the media.

Gyllenhaal does such a fantastic job fleshing out the character that you'd follow Lou beyond TV news to whatever arena he'd be willing to apply his unique skillset; a Nightcrawler sequel set in Wall Street might be a bit too on the nose, so how about seeing Lou Bloom in Hollywood? I'd pay good money to see Lou come across someone even slicker and sicker than him.

More:  Nightcrawler  Dan Gilroy  Jake Gyllenhaal  Riz Ahmed  Rene Russo  Bill Paxton
Follow us on Twitter @The_Shiznit for more fun features, film reviews and occasional commentary on what the best type of crisps are.
We are using Patreon to cover our hosting fees. So please consider chucking a few digital pennies our way by clicking on this link. Thanks!