In the final shot of Non-Stop – spoiler alert – Liam Neeson attempts to crack a smile. It does not look like the smile of a happy man. The poor guy has just spent the last 106 minutes with his face contorted into a permanent grimace; his 61-year-old body presumably ravaged with pain. This is Liam Neeson's life now: playing action hero and paying the physical price. He is now professionally angry and exclusively achy. He's not so much an actor as he is an unofficial Expendable. It's sad to see a once-great actor like Neeson reduced to slugging his way through cheesy B-movies, but Non-Stop at least has the decency to be appropriately ludicrous – and Neeson at least gets to sit down for a bit in this one.


As you'd expect from director Jaume Collet-Serra, who directed Liam Neeson in mystery thriller Unknown, Non-Stop is a whodunit with added punching. As Air Marshal Bill Marks, Neeson finds himself embroiled in a mile-high murder mystery, as an anonymous passenger taunts him via SMS and threatens to kill someone every 20 minutes unless they're wired $150 million. Non-Stop starts out interesting enough, planting the seeds of various clues in its first 15 minutes, but it doesn't maintain its sense of mystery for long enough.

One early reveal threatens to turn the plot on its head, but what starts out as an intriguing mystery ends up devolving into a series of increasingly convoluted plot twists, each more implausible than the last (yet, notably, it is still not half as implausible as Flightplan). It is crucial that a film of this genre can convince you it is smarter than you are - the moment that balance shifts is the moment it begins to lose credibility. Non-Stop makes an admirable effort to distract you with silliness. 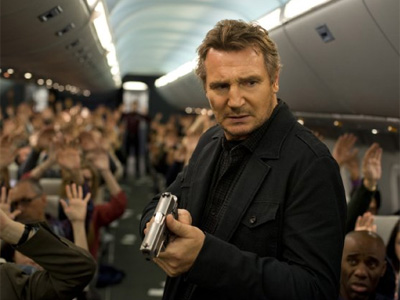 "Someone let me sit down or I will kill every single one of you."


Furthermore, while Non-Stop does feature traces of Hitchcockian suspense and Agatha Christie-style slow-burn mystery, it also has its fair share of bone-headed logic farts – like when Neeson's character learns he's being set up but tells a potentially incriminating lie for no reason, when telling the truth would be the most obvious and most professional course of action. That's just bad storytelling – one of a few occasions where you can see the strings being pulled through the paper-thin plotting. Plus of course, the movie requires the suspension of disbelief that Liam Neeson has lightning thumbs when it comes to texting, when in real life, you just know he'd be all, like, "How do I… what do I push? Oh… I've gone back to the home screen. What's a hashtag?"

Thankfully, Neeson is tremendously good value for money in these types of situations: a colossus of charisma able to elevate even the shittiest material into something you'd feasibly watch late night on ITV4. Non-Stop isn't quite the airborne Taken you might expect (I couldn't beat @m__abbott's title 'Taken Off'), as the aforementioned punching is largely quarantined to small pockets of activity, but Neeson's character – a divorced, stressed-out alcoholic - is basically shat on throughout the entire film. If any other actor took time-out from a high-pressure murder mystery to nip to the toilet for a fag, it'd seem idiotic; with Neeson, you feel his need for a moment's peace. 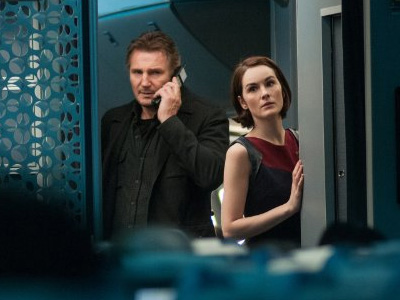 
Neeson strides through the movie with the confidence of a man who knows he's box-office catnip. He's believable as both a badass and a fuck-up, and although the scene in which he loudly confesses his sins comes across like someone reading The Big Book Of Conflicted Action Hero Clichés ("My daughter has leukaemia! I'm not a good man!" etc etc), Neeson at least gives it some welly. The rare occasions he attempts to defuse potentially fraught situations with comedy are inspired but few and far between – Neeson gruffly promising his disgruntled passengers free international travel for a year if they stop bothering him is a comic highlight. Otherwise, it's scowl city from take-off to landing.

Non-Stop has a distinctly 90s feel to it, helped no end by two fantastic flat-top haircuts (one belonging to 12 Years A Slave star Lupita Nyong'o channelling Grace Jones channelling an air stewardess channelling a Cockney), a villain in a vest and a palpable Passenger 57 vibe. It's not going to divert Liam Neeson's career path from its inevitable destination of permanent spinal damage, but it is cheerfully enjoyable schlock that remains compelling and watchable even at its worst.

More:  Non-Stop  Liam Neeson  Jaume Collet-Serra  Julianne Moore  Scoot McNairy
Follow us on Twitter @The_Shiznit for more fun features, film reviews and occasional commentary on what the best type of crisps are.
We are using Patreon to cover our hosting fees. So please consider chucking a few digital pennies our way by clicking on this link. Thanks!