Wanna a see a magic trick? Yeah you do. Everyone loves magic. Think of a number between 1 and 5. Multiply it by 9. Add the two digits of your answer together to get a single digit. Subtract 5 from this number. If A is 1, B is 2 etc, find the letter of the alphabet that corresponds to your number. Pick a country that starts with this letter. Now think of an animal that starts with the second letter of that country. Now imagine what colour that animal usually is. By the end of this review, I shall reveal the animal and the country you were thinking of (*pauses for astonished but also mesmerised silence*). But right now, I can tell you’re thinking, "isn’t this a somewhat laboured and overlong opening paragraph for a 3 star film?" You are, aren’t you? (*waves arms*) THAT’S MAGIC (*dead dove drops from sleeve*)


The problem any magician (such as myself) faces is proving to the audience that a long set up will have a worthy pay off. The biggest trick the Four Horsemen pulled off in the first film wasn’t robbing a Parisian bank whilst on stage in Vegas; it was convincing the world that a fairly OK film warranted a flashy sequel. The big reveal the first time around was that Mark Ruffalo’s FBI agent owned some kind of magic roundabout and was the brains behind the whole Robin Hood operation. It was a neat twist, but didn’t leave much room for a sequel that didn't just try to repeat the same trick. Despite trying to pull the odd switcheroo, essentially Now You See Me 2 retreads the same story with a few more shades of grey. The ace up its sleeve is that it doesn’t really matter. 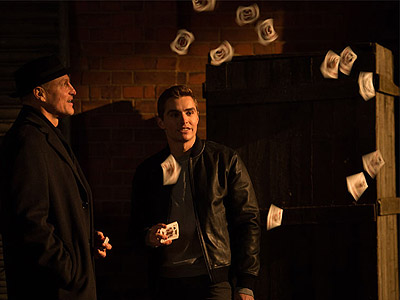 You can clearly see the wires here. On Woody, I mean.


We pick up with the Horsemen 18 months after the original film ended; one has got so bored of waiting for something to do that they’ve left the group (Isla Fisher’s escapologist Henley) leaving the way for Lizzy Kaplan as the token manic pixie dream girl, trying to out-twitch Jesse Eisenberg’s illusionist J. Daniel Atlas. Woody Harrelson’s mentalist Merrit and Dave Franco’s card sharp Jack Wilder are apparently sharing a studio apartment and using hypnotism to pull women, which is not in any way creepy. Mark Ruffalo’s Dylan Rhodes is now pretending to be the world’s most inept FBI agent to throw the Bureau off of the Horsemen’s scent, and Morgan Freeman’s magic debunker Thaddeus Bradley has somehow managed to get a webcam and internet connection in his jail cell to inform his YouTube followers that he’s out for revenge.

Enter stage right Daniel Radcliffe as an off-the-grid tech magnate who separates the Horsemen from their leader Dylan and magically dumps them in Macau, "the Las Vegas of China" but could just as well be Chinatown in Denmark. Radcliffe –with a beard to show he’s now of drinking age – is the unconvincing villain of the piece who wants to get back at his former business partner, but also wants the Horsemen to pay for getting one over his dad, Michael Caine who’s back. At….His….Staccato. Best. Despite a fun intro that pokes fun at the typical "and this is how I did it" reveal, Radcliffe quickly becomes just another identikit megalomaniac out for world domination. We don’t even get to see his magic wand. 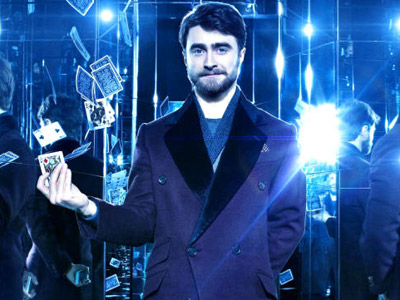 The producers apparently mistook the entire Harry Potter franchise to be an audition tape.


Addressing the elephant in the room of the original, director Jon M. Chu uses more practical effects this time around rather than Louis Letterer’s reliance on CGI-trickery. But what gains are made from a few more sleight of hand tricks are outweighed by a lack of fun banter between the magicians that managed to paper over the plot holes in the first outing. The emphasis here is working as a team, which means no one gets to play to any of their strengths. The extended finale on a rainy New Year’s Eve in London focuses for too long on two of the four Horsemen, meaning Kaplan doesn’t get to showcase the skills that apparently got her the gig as Horseman in the first place, and poor Woody Harrelson is reduced to having to play his own evil twin, just to give him something to do.

But these are tough and depressing times, so anything which takes the edge off for a couple of hours has to be a welcome diversion, and it’s there where NSYM2’s magic lies. A quick change involving Eisenberg switching a tray of sushi into a briefcase is unexpectedly entertaining, as is an overlong but worthwhile card-chucking scene where our magic dudes must hide a card-shaped MacGuffin during a lengthy security pat down. It’s corny and it’s predictable but there’s an underlying charm that almost blindsides you, and its embrace of its ridiculousness is a definite improvement on its predecessor. Whether the final illusion is worth the two-hour wait is up for debate, but do you know what is magic?

More:  Now You See Me 2  Jon M Chu  Jesse Eisenberg  Daniel Radcliffe  Woody Harrelson  Dave Franco  Mark Ruffalo  Morgan Freeman  Lizzy Caplan
Follow us on Twitter @The_Shiznit for more fun features, film reviews and occasional commentary on what the best type of crisps are.
We are using Patreon to cover our hosting fees. So please consider chucking a few digital pennies our way by clicking on this link. Thanks!