Joseph Kosinski made his directorial debut with Tron: Legacy, a movie that boasted the sleek lines of an Apple product with about as much narrative thrust as the iTunes terms and conditions. With Oblivion, his second movie as director and his first as screenwriter, Kosinski keeps the slick, glossy sheen of his sophomore effort (trading black for white) but bolts it onto an involving, expansive sci-fi that asks more of you than simply to ogle its gorgeous curves. Though it shares similarities with many iconic works of science-fiction, including The Matrix, 2001 and one recent movie that would act as a spoiler if I named it, Oblivion nonetheless makes a bold attempt to be remembered on its own terms thanks to a dazzling arrangement of future tech and some truly satisfying plot twists.


According to Tom Cruise's monotone opening voiceover, the movie is set 60 years after an attempted alien invasion. Bored of emulating Roland Emmerich movies and blowing up our landmarks, the bastards took out our moon, the effects of which ravaged half the Earth, while the resulting war scorched the rest. Mankind won the battle but were left with a planet unfit for survival, leaving blue-collar workers like Jack Harper (Tom Cruise) behind to carry out maintenance on the unmanned drones that scour the surface of the planet. That's right, he's basically the equivalent of that cashier in Tesco who hovers round the self-service check-outs for when the machines inexplicably decide they're protesting your shopping. 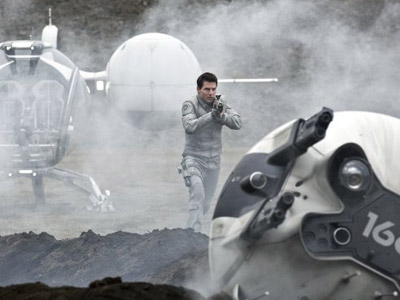 
All, as you should really expect by now, is not as it seems. Oblivion's trailers appeared to give the game away with the reveal of Morgan Freeman and his shady cabal stowed away in Earth's dankest caves, but Oblivion has more substance than its promotional materials suggest. Unnerving tics and unsettling anomalies from the first act soon develop into larger, more far-reaching plot threads, culminating in a final act of unexpected – but not unearned – grandeur. Oblivion is an accessible movie first and foremost, but is sci-fi of surprising depth and has a budget to match its big ideas. It only overshoots the mark in its final minutes, using spectacle where ambiguity would be a better fit for the subject matter.

The preceding 116 minutes, however, are spectacular indeed. Kosinski continues to indulge in fast-moving, kinetic action scenes, and while Oblivion's spherical bubbleships might suggest a dizzying, directionless approach to shooting, his set-pieces are clearly defined and well staged – like the theme park ride with which it shares a name, Oblivion might feel on rails but it's no less thrilling for it. The movie's VFX, production design and sound design combine to form an aesthete's dream; an effective team and then some. Much is borrowed or adapted, but never so highly polished. 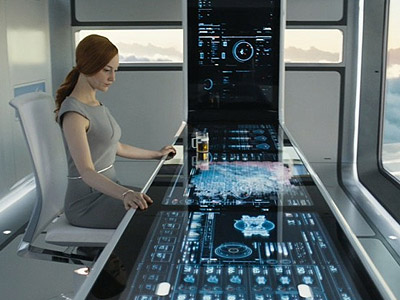 
Cruise dials the action hero shtick down to a tolerable level, but he's still unable to play the Average Joe, meaning the reveal that he's destined for big things hardly comes as a surprise. It's a perfunctory, if not revelatory performance from Cruise, but is complimented by two strong female leads; a note perfect, disquieting Andrea Riseborough as his partner, and the divine Olga Kurylenko, the catalyst to Oblivion's mystery. Morgan Freeman gets the short straw, playing the 'Denis Leary in Demolition Man' role of underground freedom fighter, a relatively unexciting part given extra narrative weight because Morgan Freeman.

Convincing as a crowd-pleasing action blockbuster while containing all the necessary requirements for solid science-fiction, Oblivion casts its net wide but only falls short of greatness when it comes to its drab script, lacking the necessary wit or eloquence to elevate the exposition. Grand themes of identity and obedience swoosh by as quickly as Kosinski's gun-toting drones, leaving you with a sci-fi that's always a little more inclined to have the heart racing instead of the grey matter working. As an upgrade from the cold, emotionless Tron: Legacy, however, it's outstanding; Oblivion is a big, bold, shiny success that holds its own with the best sci-fi of the new millennium.

More:  Oblivion  Joseph Kosinski  Tom Cruise  Andrea Riseborough  Morgan Freeman  Melissa Leo
Follow us on Twitter @The_Shiznit for more fun features, film reviews and occasional commentary on what the best type of crisps are.
We are using Patreon to cover our hosting fees. So please consider chucking a few digital pennies our way by clicking on this link. Thanks!