If you are a hipster, then you are welcome here. This website is a broad church and no one is turned away. But know this: I do not understand you. Be you Williamsburg or Shoreditch, you are an alien to me, as are all your kind. Aren't your trousers uncomfortable? Aren't jam jars massively difficult to drink out of? Do you have to eat loads of jam just to get the jars? And yet you are a significant enough cultural phenomenon that you bear documentation through film and television, which is more than you can say for me.


A legitimate cultural phenomenon it is, too. Youth subcultures grow out of the socioeconomic conditions of their age, and hipsterdom is a byproduct of a depression. When young, affluent people settle in metropolitan areas and find a housing market such that they have no realistic hope of buying property for the next ten years, they are left with a lot of disposable income and a different set of long-term goals than their parents' generation - or even none at all. So what do you do? Buy a lot of hats, make art out of abandoned shopping trolleys and put it all on Instagram. Because what else do you have to aim at?

But from hippies and punks came genuine artistic movements and a lot of great art. Other than Girls, which brilliantly turns the idea of a directionless generation in on itself, hipsterism has not yet done this, at least not on screen, which is all I know anything about. It may yet; there is enough in last year's Frances Ha and in Obvious Child to suggest it. But it hasn't yet overcome the issue of convincing a non-hipster viewer that its worldview is not terminally inward-looking; that its characters have genuine problems to overcome or are experiencing the sort of personal growth a traditional narrative demands. 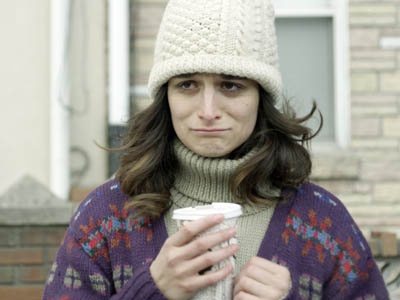 
Oh, yeah: Obvious Child. Knew there was something. So it's a film, right. And it's about Donna Stern (Jenny Slate), who is an occasional stand-up comedian in Brooklyn. Dumped by her boyfriend, she hooks up with straight-laced Max (Jake Lacy) and gets pregnant.

This should be her main problem in life, or certainly in the context of the story, but it isn't really. She decides on an abortion, and writer-director Gillian Robespierre approaches it with a refreshing lack of issue-led commentary or grandstanding. Mainly Donna seems to suffer a sort of listlessness; a sense of not having found a purpose. This is reasonable: she gigs sometimes, and is very funny on stage, but we don't see this often enough to convince us it's her true calling. (A shame: it could've anchored the whole thing nicely as a sort of confessional leitmotif.) Otherwise she works part-time in a liberal bookshop, whose name is a great satirical joke, and hangs out with her friends and parents.

And there's your problem: as naturally funny as Jenny Slate's central performance is, Obvious Child hangs its hat on the abortion as a turning point in Donna's life, then shows her treating it off-handedly, not as a big deal or even a decision. Every woman she talks to about it has had one too, and relates it as a casual experience. Fine, but structurally it leaves the whole thing a bit uneven. 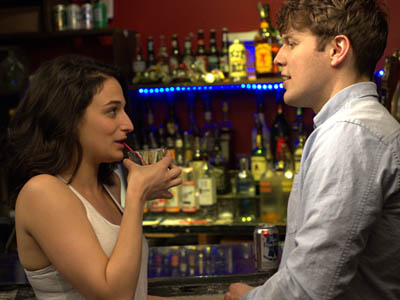 Wearing a shirt from Gap to a bar in Brooklyn: like wearing a swastika to a Bar Mitzvah. (Or just anywhere: swastikas generally aren't cool.)


What we see more and more with hipster narrative art is an unwillingness to present traditional characters to be easily related to. I'm not sure this suggests a firebrand break with convention so much as a tacit acknowledgement that the outside world thinks they're all a bit daft.

But on Girls this is played upon: you're not supposed to like Hannah and her sisters, but buy into a satire of their infantilised culture. This works on TV because there's room and time to explore the idea and make the position clear. Obvious Child doesn't quite manage this. Its characters aren't unlikeable, but they certainly tread the line.

I enjoyed it - it's funny, well-acted and boasts a lovely central friendship between Donna and Gaby Hoffmann's Nellie - but I couldn't dive in headfirst because I thought the emotional crisis Donna claims to be experiencing didn't involve any actual problems. Living in a historically poor neighbourhood whose rents you can no longer afford because a gang of rich art students have colonised the place and made it fashionable to live in: now that's an actual problem.

More:  Obvious Child  Gillian Robespierre  Jenny Slate  Jake Lacy  Gaby Hoffmann  Gabe Liedman  Richard Kind  Polly Draper  David Cross
Follow us on Twitter @The_Shiznit for more fun features, film reviews and occasional commentary on what the best type of crisps are.
We are using Patreon to cover our hosting fees. So please consider chucking a few digital pennies our way by clicking on this link. Thanks!