Orange is the New Black: season one

Women's prison fiction has a proud tradition of providing jollies for the adolescent male. But Orange is the New Black, Netflix's latest original series, missteps horrifically in its positive depiction of women as rounded characters whose concerns extend further than lezzing each other off in the shower.


I mean, it's just unrealistic. Everyone knows women's prisons are gigantic frigfests, full of women whose life experience can be boiled down to "killed abusive husband".

Or maybe not. While Orange does begin inauspiciously, with a bit of shower-based boobage, it quickly becomes apparent that this is a rare thing: a drama revolving entirely around women, whose stories have depth, colour, heroism. Some of them even tread the line between sympathetic and not: something we've seen a little more of recently on Girls, but which still remains an unusual risk. With the Bechdel Test passed within about two minutes, though, there's scope here to go further and take some chances. 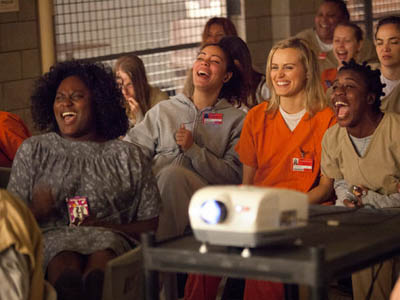 Prison inmates for whom any film is a treat: the test audiences for most Adam Sandler movies.


Orange revolves around Piper (Taylor Schilling), a middle-class white girl about to go to prison for drug-smuggling. The sentence is the legacy of her wilder youth, when she was in a lesbian relationship with heroin distributor Alex. Now engaged to Larry (Jason Biggs), she's treating it as an interruption to a life on the straight and narrow. He even has to promise her he won't watch Mad Men until she gets out.

Once the door slams behind her, you're expecting a hell-hole for which she's unprepared, but you get the opposite. We largely stay off the well-trodden path of shivs, rape, cigarettes as currency and so on. Piper's first real obstacle arrives through an offhand remark that insults Red, the Queen Bee and head of the kitchen, who decides to starve her until she learns her lesson. By the end of the first episode, she's got to deal with the fact that Alex (Laura Prepon) is in there with her.

These aren't new problems for Piper, though; they're the same petty spats she would've experienced if she worked in an office, only squashed into a confined space. This is a woman's world forced into microcosm. 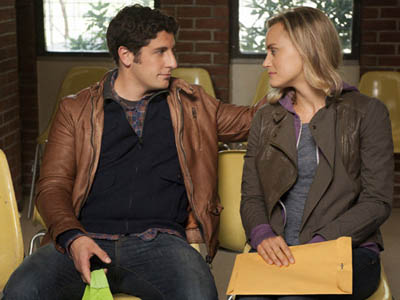 "A whole year with the house to myself! Imagine all the pie-fucking I'll get done."


Where the sex rears - or mainly dips - its head you could make the accusation that Orange strays into depicting lesbians as one-dimensional sexual beings, but you note at the same time there's also plenty of inter-female affection and support. Everyone is vulnerable in some way: the frequent Lost-style flashbacks show you how several of the women ended up here, and it's usually the result of being screwed over by a man or an institution. The story of Sophia, a transgender woman, is in particular heartbreakingly sad.

I remember mentioning while reviewing a Louis Theroux documentary two years ago how there's no point in comparing the moral code inside a prison with that of the outside world. But while the day-to-day trials are really no different to those of a woman on the outside, it's interesting that Orange is less concerned with the morals of the institution and more with illustrating how its main character, for all her fish-out-of-wateriness, is essentially no different to all the other inmates. And with a pace that better suits the simultaneous-episode-drop model than does House of Cards, Orange represents the best Netflix original series this year.

More:  Orange Is The New Black  Taylor Schilling  Laura Prepon  Jason Biggs  Netflix
Follow us on Twitter @The_Shiznit for more fun features, film reviews and occasional commentary on what the best type of crisps are.
We are using Patreon to cover our hosting fees. So please consider chucking a few digital pennies our way by clicking on this link. Thanks!