Oz The Great And Powerful

Big CGI adaptations of classic children's literature will now always bring to mind the Technicolor yawn that was Burton's Alice In Wonderland. As with that film, this prequel’s bright, colourful landscape and cartoonish, pixelated characters always looked to me like they would produce the same uninspiring results. But thankfully, while Oz may still look like it has been twinned with the garish Wonderland here, somewhere under the rainbow, you might find some real, genuine magic.


The biggest relief of all is that, if this film has been splashed with huge daubs of spectacular colour, it is still clearly Raimi doing the hand-painting, because his fingerprints are everywhere. From brilliant silly gags and asides, to his famous whip pans and, yes, POV shots of flailing, inanimate objects, you can easily believe that this huge Disney blockbuster is being handled by the same slapstick-happy director of The Evil Dead trilogy.

In particular, the transition scene from the pre-requisite black and white opening (with narrower aspect ratio, allowing for some extra subtle 3D trickery) to the gloriously rich - and now wider - land of Oz is truly spectacular. In the midst of a raging tornado, Franco's wizard hides in a hot air balloon basket while attacked from all sides by whirling debris and snapping ropes that might as well be Doc Ock's tentacles. It's a sequence that is as chaotic as Raimi's best loved scenes and culminates in a beautiful, sailing introduction to Oz. 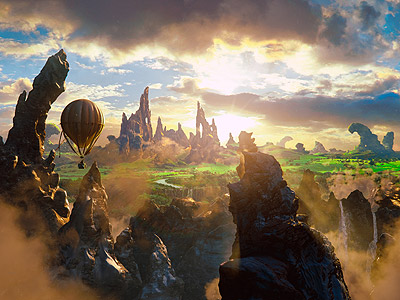 Oz: Come for the views, stay for the vicious flying monkeys.


Once landed, however, the film risks becoming overly saccharine as imaginative flora and fauna come alive and, almost immediately, Franco’s wizard meets a loved-up Mila Kunis. Between his marvelling at this new magical world, her doe-eyed rapture at meeting the prophesised wizard and Raimi’s eagerness to make everything link to The Wizard Of Oz, the film looks in danger of being derailed by its own fancifulness. Luckily, the script keeps everything grounded with some great comedy, a lot of which stems from Finley, the wizard’s new flying monkey sidekick, voiced by Zach Braff, and a small girl made of china. Just trust me on this.

It really is the script that is the film’s saving grace here. James Franco and his three witches – Kunis, Weisz and Williams – all have great character moments but they all frequently look uncomfortable in these eccentric roles. Franco in particular, handles the humour well but when it comes to displaying the showmanship of a man masquerading as a powerful magician, he looks a bit… embarrassed. And the same goes for our good, bad and (post-transformation) ugly witches, all of whom give just as many flashes of tongue-in-cheek theatricality as awkward pantomime. On a few occasions, you can almost see each actor getting lost and confused amid the green screen palace that is the Emerald City. 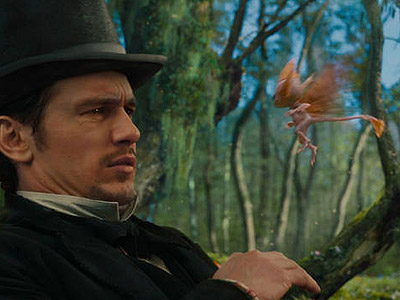 
Yet, unsurprisingly, the CGI creations do most of the work anyway, and it’s heartening to see that Raimi makes these work in a film that takes its visual template from a film that is now 74 years old. In fact, in his efforts to match the tone and aesthetic of the classic Wizard Of Oz, Raimi makes almost all the right choices. Incredibly dated elements like the singing, dancing Munchkins are thankfully given minimum screen time, while the overall story of the film fits in perfectly with the original’s own “find the goodness within” message. The only disappointment comes in the eventual reveal of the Wicked Witch, who surprisingly has far less presence and bite than her original incarnation.

Save for a slightly dampened ending – a result of prequel-itis, where everything has to be in place for the following story rather than have its own definitive conclusion – the film is largely a triumph. It’s often an exercise in insubstantial, gaudy CGI, but overall, while it may not have much courage in its adherence to the 1939 classic, the film still manages to find both a brain and heart somewhere along the way.

More:  Oz The Great And Powerful  Sam Raimi  James Franco  Mila Kunis  Michelle Williams  Rachel Weisz  Zach Braff
Follow us on Twitter @The_Shiznit for more fun features, film reviews and occasional commentary on what the best type of crisps are.
We are using Patreon to cover our hosting fees. So please consider chucking a few digital pennies our way by clicking on this link. Thanks!