There are some things you would expect from a Peter Pan movie: flying kids, oppressive parental figures, some fairies and shit. Pirates singing Nirvana songs, galleons trying to out-race spitfires and Hugh Jackman huffing pixie dust probably not so much. Creating a gritty backstory for a 12-year-old can't have been easy, but director Joe Wright pulls it off with great aplomb, making it one of the most entertaining visits to Neverland so far. Add in thrilling action sequence after action sequence, and you've basically got Mad Max: Fury Road for kids.


Not least because Hugh Jackman's Blackbeard is somewhat of a pared-down Immortan Joe, trying to conceal the ravages of age from his baying slave pirates who in this instance mine for the age-defying Pixum – the street name for pixie dust – rather than water. There's also a protracted chase scene for the latter half of the film as Peter and pals try to escape the clutches of the nefarious pirate captain. Unfortunately there's not a punky blind Lost Boy shredding his guitar at key moments, but you can't have everything, I suppose.

The question is, though, how exactly did Peter become Pan? In Wright's version of events, we learn that Peter's mother had some mad parkour skills, and reluctantly dropped him off at an orphanage in 1930s London, with a fetching pan pipe necklace and a letter speaking of meeting again in a far away land. 12 years later, he's a loveable cheeky urchin, complete with a Home-Counties-does-cockernee accent, which is fairly impressive since young Levi Miller is actually Australian, the precocious little bastard.

Whilst the Nazis blitz London, Peter is living under the beady eye of a wondrous Kathy Burke as a monstrous Mother Superior, who it turns out is running a nice line in child trafficking and selling off her lost boys to the Neverland pirates. Bungee-jumping from their magical galleon to pull the sleeping children from their beds, Peter attempts to gallantly save his best pal Nibs from their clutches and so his awfully great adventure begins. In one of the best sequences in the film, the pirate galleon attempts to outrun spiralling spitfires over a bombed-out London, before shooting into the atmosphere and a beautiful Gravity-inspired sequence when a bewildered Peter spirals through space. 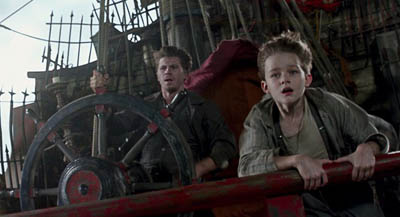 
Landing in Neverland, with the punk-loving pirates singing "Smells Like Teen Spirit" upon their arrival, Peter and the other captives meet Jackman's charismatic Blackbeard, who promises loads of chocolate in return for toiling in his underground pixie caves for a sparkly substance which reverses the seven signs of ageing. It's here that we meet the lovably dopey Smee (Adeel Akhtar) and James Hook (Garrett Hedlund), who – get this – carries around a hook. Nice foreshadowing there, guys! Together, the trio abscond from Blackbeard's mine and dive into Neverland's lush jungle in search of Peter's mother.

There's a certain degree of plodding inevitability however, as there's a prophecy at the heart of it all, which foretells Peter's arrival to overthrow Blackbeard and his ability to fly, a skill which he discovers to an a cappella version of The Ramones' "Blitzkrieg Bop". Fortunately, this is all neatly wrapped up in some stunning and inventive woodcut visuals and, Hook's hook aside, we're not overly bogged down with visual clues and omens to tie us to the original source material.

As he showed in the stunning long-cut in Atonement, Joe Wright is certainly inventive when it comes to camerawork, and the non-stop action is never so dizzying that you can't see what's happening on the screen. (I'm looking at you, Michael Bay and the Wachowskis. Yeah, I'm current.) He also makes great use of 3D, giving Neverland a deep, lavish look, and isn't afraid to poke some stuff out of the screen, the only thing I really enjoy about 3D. There's also some family-friendly violence; the pirates shoot pistols, but their victims explode into brightly coloured powder. 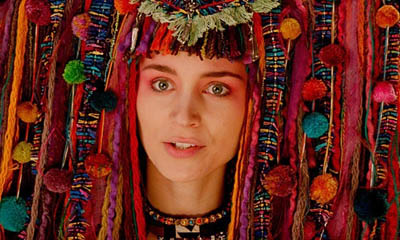 "Oh, thanks. Yeah, Nicki Minaj wasn't using it, said I could have a borrow."


Where Pan stumbles is that for all the childlike glee through the character's romp though Neverland, none of the characters has a particularly fun time, always on the run and battling to survive. Neverland native Tiger Lily (Rooney Mara) is a little too serious, despite her ethnically diverse tribe's penchant for brightly coloured wool. Hedlund tries to do his best audition for an Indiana Jones remake and brings a bit of old-school charm to Hook, but his misguided attempts to flirt with anything with a vagina feel out of step with the rest of the film.

Also slightly frustrating is the one eye on an inevitable sequel. The opening narration (seemingly shamelessly stolen from Family Guy) tells us "sometimes friends begin as enemies, and enemies begin as friends", with Peter and Hook in the midst of a beautiful bromance. I'm thoroughly intrigued to find out the hows and whys of when the two inevitably become mortal enemies, but it's not even so much as hinted at, which is a bit of a bummer. One extra note of warning; if you're planning on taking any fairy-obsessed five-year-olds, there's a long wait until Tinkerbell pops up and she's barely more than a shiny blob of light.

None of this should really put you off, though; Pan is a proper rollicking adventure through a reimagined universe, one that's strangely familiar but with plenty of surprises uncovered by various trapdoors, magical maps and secret passageways. It's annoying that kids get all the good stuff, but we can quietly hope that one day someone else will attempt more family-friendly versions of post-apocalyptic visions of the future.