So, four films in - we all know the routine by now, don't we? A family set up cameras around the house after strange phenomenons occur. All manner of ghostly ill behaviour ensues, audiences jump, people die. See you next October for much of the same.


Watching Paranormal Activity 4 – the second of the series directed by Catfish guys Ariel Schulman and Henry Joost – is like riding an overly familiar rollercoaster. You know full well what you're letting yourself in for: you want to give yourself a bit of a fright and hopefully leave with a smile plastered across your face and a giggle on your lips. But if you try to analyse the lazily loose plot, your enjoyment will be tarnished. Yeah, that's right. I'm basically comparing Paranormal Activity 4 to The Nemesis, what of it? They might both be a lot of fun but the 'story' makes little to no sense. 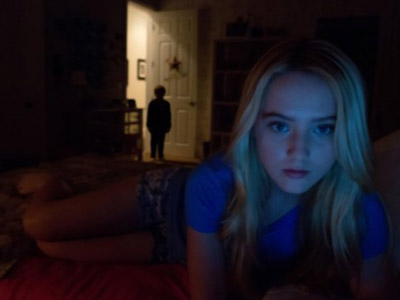 
Paranormal Activity 4 picks up five years after the events of the second movie, and there's a handy recap revisiting the supernaturally-possessed Katie killing her family, abducting her sister's baby, Hunter, and swiftly pissing off. The 'action' jumps to November 2011 and joins a typically middle-class American family living it up in a Nevada suburb. The kind of family who have several MacBook Pros scattered conveniently around the house. There are the parents on the verge of divorce, Wyatt, the scruffy-haired six-year-old son, and the teenage daughter, Alice. Oh, and her douchey boyfriend Ben, who happily makes himself at home. We know he's a douche because he brags about his penis and high-fives himself.

The paranormal activity begins when a single mother and her creepy young son Robbie move in across the street; after she's rushed to hospital, our new family take her son in for a few days. Handily, Ben's a bit of a computer expert and rigs all the computers in the house to film all the strange, ghostly high-jinks... and his girlfriend sleeping (see what I mean about douchery?). There's no need to delve deeper into the plot to save from spoilers, but let's say there are some sizable plot holes and unanswered questions as the writers struggle to connect the dots and hope no one notices.

The trickiest task facing writers Christopher Landon and Chad Feehan is to continuously find new, feasible excuses as to why a family would record everything while still making it relevant to the first two movies. Number 4 is the logical next step in a series that looks to be nearing the end of its tenure, and by now the concept is stretched dangerously thin, but they manage to scrape by thanks to their employment of new gimmicks - laptop webcams, video chat, iPhones and most prominently, an Xbox 360 Kinect. 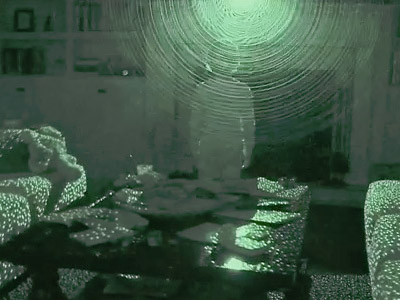 
It might be a Bond-esque level of product placement but the Kinect does offer an intriguing new addition. When viewed through a night vision camera, Xbox Kinect covers your room in thousands of motion-sensing green dots (I dare anyone who owns one not to try it when they get home). It's perfect for spotting sinister figures moving through the room; at one particularly ludicrous juncture, the evil spirit controls an Xbox avatar.

Venturing down the teen horror route, PA4 focuses more on Alice, Ben and the two younger children - the characters and dialogue are as natural as you'd expect i.e. casual swearing and lots of it. The scares remain sharp, sudden and effective, and their sporadic delivery does build tension, but while the anxiety of the previous movies was teasingly drawn-out, the pacing here is unpredictable and the frightening moments come in fits and starts. The series has certainly started to show its age. Any further installments will surely garner angry yawns.

Nevertheless, Paranormal Activity 4 is certainly good for a few cheap scares if you don't think too hard about it, and a couple of references to The Shining and The Exorcist raise an appreciative smile. Little boys in dungarees who rarely blink still remain creepy as Hell. But let's leave it at four films, shall we?

More:  Paranormal Activity 4  Paranormal Activity  Ariel Schulman  Henry Joost  Katie Featherston  Product Placement
Follow us on Twitter @The_Shiznit for more fun features, film reviews and occasional commentary on what the best type of crisps are.
We are using Patreon to cover our hosting fees. So please consider chucking a few digital pennies our way by clicking on this link. Thanks!