Parks and Recreation: Season One DVD

I know you have to reckon BBC4's amazing if you're middle class, but in the main I could do without hour-long documentaries about iron filings on a Thursday night. If I get a say how my licence fee's spent, though, I'm happy to sign off on Parks and Recreation.


The show and channel are a slightly awkward fit in a way. An evening's BBC4 schedule tends to read like an obscure lecture timetable you know you'd probably enjoy if you weren't going to watch Men in Black on ITV2 instead. Its comedy output leans towards the smarter end, like Twenty Twelve and The Thick Of It. Parks and Recreation is not an 'intelligent' show, particularly, but in common with these it does make comedy out of the incompetence of people in public office. Here, though, in the parks department of Pawnee, Indiana, the stakes are as low as can be. 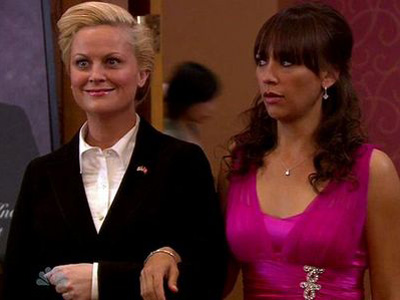 This never happened on The West Wing.


Shot in the same mockumentary style as The Office, Parks follows Amy Poehler's Leslie Knope, a powerless civil servant and stickler for regulation, who pounces on the chance to make a name for herself by turning a disused gravel pit into a park. This gives it the chance to introduce its Tim/Jim character (ie our eyes and ears, the one who realises everyone else is nuts): Ann Perkins (Rashida Jones), a nurse whose house backs on to the pit and whose boyfriend fell into it.

This setup lends the six-episode first season a definite narrative arc as Leslie makes vain attempts to get the project up and running. In terms of laughs it hasn't quite hit its stride at this point: Poehler's brilliantly earnest vulnerability works straight away, but the show hasn't yet figured out how best to use its supporting cast. As it develops, more good jokes and subplots go to Aziz Ansari's wannabe player Tom Haverford (and they start to focus less on jokes about his being Indian American, mercifully), and in particular Nick Offerman's Ron Swanson. 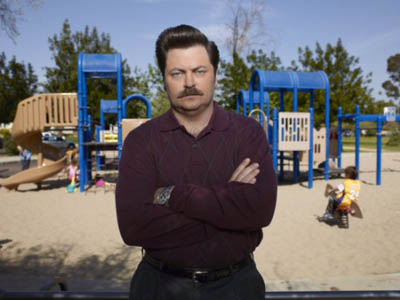 "My idea of a perfect government is one guy who sits in a small room at a desk, and the only thing he's allowed to decide is who to nuke. The man is chosen based on some kind of IQ test, and maybe also a physical tournament, like a decathlon."


In season two it finds its feet, tying up the thread about the pit project and becoming more episodic, and the laughs start coming thick and fast. But for now the brief first season acts as a marker for what's to come, boasting an excellent ensemble cast and the promise of greater things. In the meantime, there's probably a documentary on BBC4 about the history of the egg whisk or something.

More:  Parks And Recreation  Amy Poehler  Aziz Ansari  Nick Offerman  NBC  BBC Four
Follow us on Twitter @The_Shiznit for more fun features, film reviews and occasional commentary on what the best type of crisps are.
We are using Patreon to cover our hosting fees. So please consider chucking a few digital pennies our way by clicking on this link. Thanks!