How soon is too soon? Is it when the real-life victims of a tragedy are still raw from the experience? Is it when artistic licence just isn't appropriate for events that are still fresh in everyone’s minds? Is it when unseemly facts about those involved might detract from their otherwise brave and heroic actions? Or is it when - as is the case here - overcompensating for all of the above results in muddled, mawkish melodrama?


There are several arguments for why Patriots Day - which depicts the events of the 2013 Boston Marathon bombing and the subsequent manhunt for those responsible - shouldn't have been made just three years later. But there's also one argument that it should: for the filmmakers to do justice to the story and its victims.

But what does 'doing justice' mean in this instance? If, for argument’s sake, it means paying an appropriate level of respect while still making a worthwhile film, that’s not what we have here, as director Peter Berg accounts for the former and assumes it will result in the latter. But, at a certain point, consideration becomes clinginess, and Berg holds on so tight to his emotional pandering, it comes at the expense of everything else. 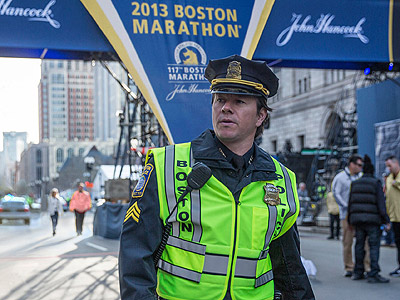 Mark Wahlberg, star of Planet Of The Apes and The Happening #NeverForget


Don’t get me wrong; of course the film has to honour those involved, but a line has to be drawn somewhere. In this instance, Berg rushes towards crossing that line faster than any of his marathon runners. The result is a film that is a tribute more than a tale, showcasing historical importance over telling a story of narrative value. As an example of the overkill employed here – spoiler alert – the film ends not just on a back-slapping, good-job-done slow-motion scene of community camaraderie, but goes on to then give us text-on-screen updates of the real-life characters and THEN shows us interviews with them too. The reason is clear: Berg feels that he has to pay respect to the victims to the point where no one can accuse him trivialising events.

Of course, it's all a question of balance, but never is it more clear that this has been lost along the way than with the film's main 'make-believe' element: Mark Wahlberg's lead role as Tommy Saunders. As an amalgamation of a few key individuals, Saunders provides a key through line from Boston everyman cop, to witness present at the bombing, to valuable investigative resource and finally to active participant in the manhunt, but as a fictional character in a real-life story, he never gets to be the hero that the film so desperately wants him to be.

Quite the opposite, in fact: as we see events fold out through his eyes, Saunders might as well be sitting in the audience with us, so reduced to the unfortunately ineffective role of spectator that he is. This is painfully apparent in scenes such as one towards the end when, while out on patrol, Saunders is alerted to a suspect hiding in a boat in a local's backyard. Berg wrings genuine tension out of the moment when Saunders approaches the boat, gun in hand... but then sirens are heard and the FBI turns up and simply takes over to apprehend the perpetrator. Because, of course, Saunders doesn’t really exist and this is what ACTUALLY happened. 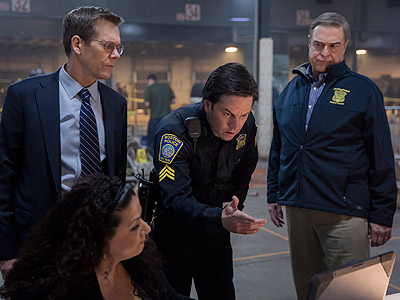 "That's a computer. See? I'm an important part of this story."


Taking the complications of true-story storytelling out of the equation for a moment, and Berg otherwise crafts a compelling drama, with high-pressure stakes and one genuinely thrilling residential street set-piece consisting of a gun-and-homemade-bomb-fight. Elsewhere though, the film feels at odds with itself. Comedy moments feel tonally out of place, as if contrived to make up for the sentimentality pouring into every other scene, and at one point Mark Wahlberg’s banter with a fellow cop somehow evolves into him giving an eloquent monologue about the strength of character of the Bostonian community.

It all smacks of a film trying to be honest and authentic, but still conscious of handling such a recent tragedy with kid gloves. And you have to wonder that, if it wasn’t for the emotional response to the events that this film depicts, the film itself would be judged more harshly. It might have even bombed.

Ouch. Too soon? Yes, too soon. That’s the point.

More:  Patriots Day  Peter Berg  Mark Wahlberg Boston  True Story
Follow us on Twitter @The_Shiznit for more fun features, film reviews and occasional commentary on what the best type of crisps are.
We are using Patreon to cover our hosting fees. So please consider chucking a few digital pennies our way by clicking on this link. Thanks!