A movie made by geeks, for geeks, about geeks... Sounds awful, doesn't it? Don't make the mistake of writing off Paul as giant bout of auto-fellatio on the part of uber-nerds Simon Pegg and Nick Frost, because despite appearances - and loads and loads and loads of science-fiction in-jokes - it's actually great fun, well-written and extremely enjoyable. Seriously though, Paul is so full of nods and wink, it's like it has a facial tic - Spaced's homage-o-meter would be overheating under the strain.


Fittingly, Paul is probably the closest thing to Spaced that Pegg and Frost have made since Edgar Wright closed the book on Tim & Daisy. Wright is absent here (The World's End, the third part of the 'Cornetto Trilogy' after Shaun Of The Dead and Hot Fuzz, is still years away) but his presence isn't missed. Adventureland and Superbad director Greg Mottola continues his streak of marrying well-formed characters to situation comedy with laughs that don't feel forced - jokes here are never at the cost of story. 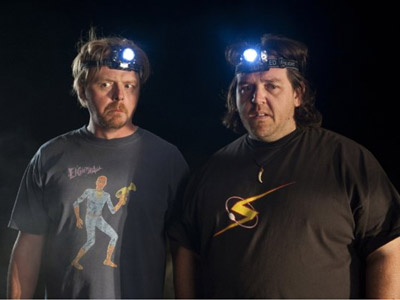 The sequel to Sanctum was underwhelming.


Crucial to Paul's success is the alien himself, which - thankfully - is both well-animated (complete with huge emotive eyes) and well-cast. Hiring Seth Rogen for any role basically ensures that the character disappears into the actor, but this is all part of the gag here - the fact that Paul likes stuff like Marmite and reggae and smoking weed is part of his charm. Some might call it lazy casting, I say it works. At any rate, he always feels like a real, tangible character - there's no danger of the ghost of Jar Jar biting Pegg on the arse. It never once looks like the human cast are staring at a tennis ball on a stick.

While jokes about Star Wars, Steven Spielberg and The X-Files are par for the course for most nerds (hardly big news if you've ever been trapped in a pub corner with one), Paul does lay it on a little thick at times - one last act cameo feels a little like wish fulfilment on the part of Pegg and Frost. In actual fact, most of the movie's best lines are apropos po of nothing ("That's a loud clock, isn't it?"), born out of awkward situations rather than a shared love of sci-fi. Nick Frost's last line is pitch-perfect. 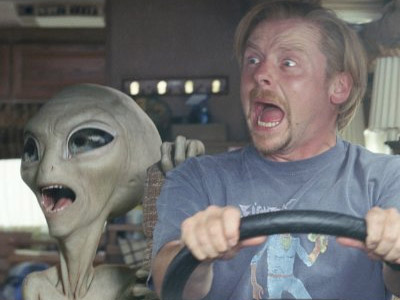 
Though the movie's concept is a little sketchy (hardly more substantial than its one-line pitch) and it'll likely be a huge turn-off to anyone who doesn't know what a 'parsec' is, Paul is a big, warm cuddle of a movie - an affectionate love-letter to sci-fi in much the same way that as Hot Fuzz was to cop movies and Shaun Of The Dead was to zombie flicks. Unashamedly gawky, it may lack the polish of the likes of Scott Pilgrim, but it just goes to show that geeks have never had it so good at the movies.

More:  Paul  Simon Pegg  Nick Frost  Kristen Wiig
Follow us on Twitter @The_Shiznit for more fun features, film reviews and occasional commentary on what the best type of crisps are.
We are using Patreon to cover our hosting fees. So please consider chucking a few digital pennies our way by clicking on this link. Thanks!