In these politically fraught times, there has been a natural proclivity in the film press industry to relate even the most escapist of blockbuster cinema to current affairs. Reviews have been quick to call out, for example, that Fantastic Beasts promoted an immigrant-friendly multi-cultural society, that Kong: Skull Island championed the right to defend your home from foreign invaders and that The Purge is so real it doesn't even work as a joke any more. And yet sometimes it's just impossible to separate a film from its overtly political subtext. And that's what we have here: a movie so bound by a post-Trump, post-Brexit, post-truth agenda, it simply cannot be reviewed outside of a topical lens. And, of course, those that remember Peppa Pig: The Golden Boots know that this isn't even her first cinema experience, so it's all FAKE NEWS anyway...


The lie purported by Peppa Pig: My First Cinema Experience is apparent in the first scene. After the familiar animated opening that begins every usual episode, we are introduced to a LIVE-ACTION 'Daisy' in a LIVE-ACTION 'garden' introducing us to the 'real' LIVE-ACTION Peppa and George Pig. The idea that we are finally seeing behind the curtain, meeting the beloved cartoon characters properly for the first time, outside of the supposedly biased media depictions, is insulting enough, but the dead-eyed paper mache box-heads that greet us are so far removed from the expressive, colourful Pigs we love in cartoon form, it's as though they have had the snowflakiness forcibly sucked out of them. 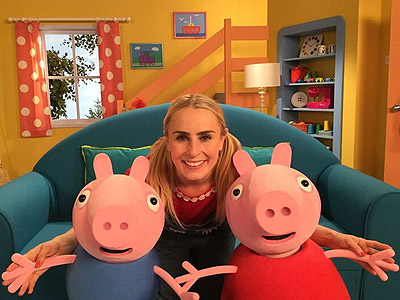 
This is, we are to assume, the real world and how things really work; not with liberal fantasist misrepresentation, but with cold hard facts about anthropomorphised porcine children that look nothing like their traditional capitalist pig images. Perhaps the block-faced, stilted piñata versions of Peppa and George are more in keeping with the animation style of Russia, where there is now seen to be more of a crossover market? There is literally no way of us finding out, but it's certainly a question worth asking.

Thankfully, the live-action is intermittent, serving as introductions to an anthology of normal episodes, mimicking the style of regular scheduled children's programming, but also bearing an uncanny resemblance to the format of Tales From The Crypt. Like the Crypt Keeper himself, Daisy seems to know just what's in store in each forthcoming adventure, casually segueing into stories that are so bullish with their propaganda, she could be called up on charges of treason just by association.

The first episode - in which Peppa and her classmates travel to London and meet the queen - is outrageous in its portrayal of the head of our state. As the reigning British monarch is shown to remove a hard-working bus driver from his low-wage seat in order to give a better guided tour for the schoolkids than he ever could, there is a palpable abuse of power; a class shift within the nation's capital that points towards an aggressive political ideal. 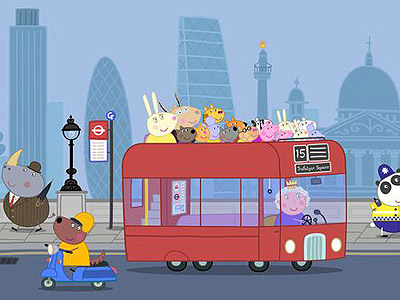 
By the time the film ends on a triptych of Aussie-themed episodes that see the Pig family land on Australian soil and outstay their welcome in the house of their Antipodean kangaroo friends, its imperialistic position has developed into full-blown xenophobia. The message is clear: the British Empire of Peppatown rules the waves.

Thankfully, there are still familiar signs of open-minded stabs at humour where otherwise logic goes awry. In one episode, Peppa and her classmates are taken on a school trip to the zoo, and, where you might find the very image of some animals visiting other animals in cages to be a savage depiction of a baseless hierarchy, there are knowing nods at the unjust situation. It's not enough to believe that dramatic change is on the way, but at least there's hope. 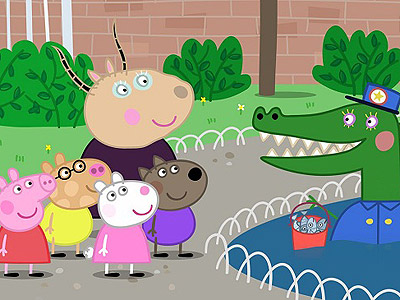 
Elsewhere, each animated instalment of Peppa Pig manages to continue striking a balance between being mesmerising for kids while also being occasionally funny for adults, throwing in the odd joke that only grown-ups will understand. However, where the film may peddle a soft political indoctrination for the younger audience, it's in these more adult moments that it really bears its teeth.

For instance, at one point, there is a subtle homage to The Italian Job, and it is apparent that the only reason for this children's cartoon movie to reference a 48-year-old heist movie is to propagate a pro-Brexit message. It reminds everyone of a nostalgic time, a story in which recent Brexit champion Michael Caine tries to take millions of pounds out of Europe, albeit with failing, shambolic plans that ultimately end in disaster.

I'm sure there are those that will defend the film, willing to turn a blind eye to its selfish agenda to focus on its story and characterisation, but context is everything. And it is more than a little apt that this movie might as well contain literal sheeple.

Mind you, the rendition of The Wheels On The Bus was pretty good. Three stars.

More:  Peppa Pig  Mark Baker  Animation  Brexit  Trump  Sheeple
Follow us on Twitter @The_Shiznit for more fun features, film reviews and occasional commentary on what the best type of crisps are.
We are using Patreon to cover our hosting fees. So please consider chucking a few digital pennies our way by clicking on this link. Thanks!