It's comforting to know that, if ever the necessity to commit acts of prolonged, unspeakable violence on another person crops up, as it inevitably does sooner or later in a man's life, there are plenty of disused warehouses around London that will make ideal locations for it. I will have no problems gaining access to them, nor will I need to worry about anyone turning up during the three days I keep my victim there, or hearing his screams, so remote will the location be. Or so Kieron Hawkes' debut feature Piggy would have us believe: with one foot in the gritty realism of traditional London crime drama, Piggy makes a respectable go of planting the other in a murky, almost fantastical netherworld of the psyche, but ultimately can't quite keep its balance.

What it really wants to be is Kill List. And why not: Ben Wheatley set a new high watermark last year for, er, British horror crime. (Britihorrocrim? Horrocrimibrit? I'll get back to you.) You're reminded of the similarities early on when John, played by Kill List star Neil Maskell, pitches up at the door of his nervous younger brother Joe (Martin Compston), only to fall foul of some of the stabbier patrons of their local pub soon after. With his brother dead, Joe retreats further into his shell, until enigmatic stranger Piggy (Paul Anderson) shows up. Piggy is an old friend of John's, and sets about helping Joe get some closure using the first step in any bereavement counsellor's handbook: finding and brutally killing his brother's murderers. 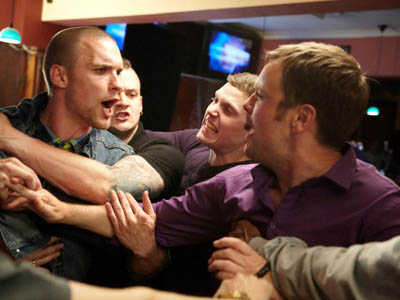 Come to London for the Olympics. We're a welcoming bunch.

As set-ups go, it'll do just fine, though the nagging doubt that the bunch of Ben Sherman lager boys they're looking for really seemed like knife-carrying types in the first place doesn't quite go away. But what follows hankers a little too hard after a dark, disquieting atmosphere, and can't quite pull it off. As in Kill List, Piggy uses loud, discordant musical stabs to try and throw you off guard, but it's a pretty benign tactic overall without the substance to back it up.

Where there's violence, Hawkes can never quite make up his mind whether we're to see it in the nasty, stomach-churning altogether, or whether we're guided away to look at Joe's grimaces while Piggy's boot crunches into the side of some poor sap's skull. Sometimes it's one, sometimes the other: a decision needed to be made here, but it's just fudged in the end.

There are two very good performances at the film's core, though: Paul Anderson is a menacing, volatile presence, and Martin Compston a very well-handled bundle of nerves and shy glances. But there's not a lot either of them can do beyond what they're given to work with: we're ticking off a list of victims and we know where it ends. Piggy's motivation for 'helping' Joe is pretty much totally obscured by the last reel, beyond a general liking for violence, it seems, which you'd imagine he could have indulged quite effectively through hanging around north London spilling people's pints. And Joe's final act is an unrealistic plot twist I've seen before and always felt cheated by. 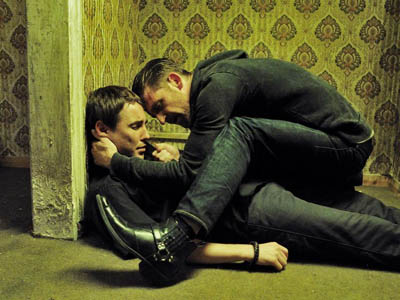 Piggy's finishing move: an elegant yet unorthodox variation on the Boston Crab.

Metrodome release Piggy to cinemas on Friday, then on DVD two weeks later, and there's a final point of interest in this as a distribution model for independent films. The point being, you show it on a limited number of screens, and the reviews you get for a cinema release essentially act as promotion for the DVD. It's an intelligent way to maximise returns on a film that has a more natural home on DVD in any case.

This isn't to deride Piggy; just set it in context. I'd watch it happily enough at home with the odd dissatisfied frown here and there, but the more traditional release route would've seen it at the bottom of Matt's DVD weekly, with the preface 'I haven't seen Piggy, but ...' and then a series of lame pig puns.

Puns which you'll notice I avoided throughout. I thought they'd be a bit too hammy.

More:  Piggy  Martin Compston  Paul Anderson  Neil Maskell
Follow us on Twitter @The_Shiznit for more fun features, film reviews and occasional commentary on what the best type of crisps are.
We are using Patreon to cover our hosting fees. So please consider chucking a few digital pennies our way by clicking on this link. Thanks!