Pirates Of The Caribbean: On Stranger Tides

Franchises don't usually recover well from a post-trilogy hiatus when coming back for a fourth instalment (I'm looking at you, Indy - and you McClane), but Pirates Of The Caribbean has the added obstacle that each previously released film got progressively worse anyway, ending on a bloated CGI mess of a finale. So has the studio learned its lesson and made a worthy reboot? Of course not – it's utter 'yarrr'se.


A lot of the blame for the substandardness of the last two films (or the last one, depending on how loyal you are to the series) was placed unfairly on Poorlando Bloom and Dreara Knightley, so with them gone, that allows for more fun-times with mincing Jack Sparrow right? Well, no, because now he has to actually carry the story.

In true adventure-mcguffin style, Sparrow (Johnny Depp) is on the trail of the Fountain of Youth after an old flame, Angelica (Penélope Cruz), forces him to show her and feared pirate Blackbeard (Lovejoy) the way to it. However, on the same trail, is Barbossa, now a captain in the Royal Navy, and some Spaniards. Also crammed into the story are some mermaids, a virtuous missionary, Jack's old pal Gibbs (Kevin McNally), Jack's new pal Scrum (Stephen Graham), some shit to do with ships in bottles, the whereabouts of Jack's ship The Black Pearl, some prophecy about Blackbeard's death... and it's exhausting to just think about it all. 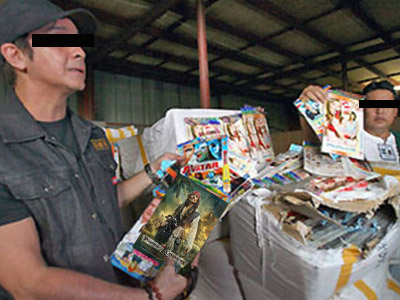 
As you can see, the many-stranded plot is just as convoluted as in the last film and, in similarly poor execution, you're never too sure of anybody's real motives and allegiances. Cruz's character, for example, is at first angry with Sparrow for how their brief fling ended, but then she uses her womanly wiles to get him to help her con Blackbeard, who THINKS she is his daughter. But then, shortly afterward, we find out that Cruz is Blackbeard's daughter after all and she was actually lying to Jack all along. It's at about this stage that any investment you have in any character other than Sparrow himself takes a running jump off the nearest plank.

Just as baffling are the alliances formed. Sparrow is first taken as Blackbeard's prisoner but, for some reason, is allowed to swagger off and have his own adventures whenever he feels like it, so long as he survives each new threat and returns to Blackbeard's side for some plot catch-up. As such you never get the impression that he is in any real danger – and if you don't care about his safety, whose do you care about?

I hate to admit it but where the film fundamentally fails is not having Bloom and Knightley – or at least someone like them. In the previous films, they were always the heart of the story while Jack provided the comedy in reacting to what's happening around him. This time, however, he stays much more on the ball and is a little less interesting because of it. Only at the very beginning and at the very end (a total of about 20 mins in a two-hour 20 minute film) is Jack allowed time to just banter about nonsense – and unsurprisingly these are the best parts of the movie. 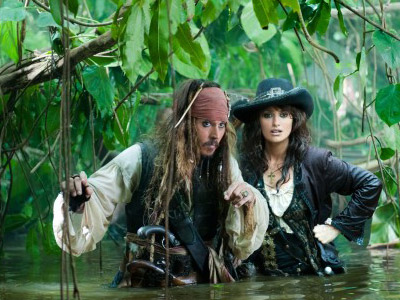 
In the midst of the seafaring and island exploring, there is something barely resembling a love story, as a missionary who is reluctantly in Blackbeard's company develops feelings for a captured mermaid (mermaid tears make the Fountain of Youth work, don't you know). But, with so much going on, neither the righteous man nor the flapping fishwoman are ever developed to the point that we care about what happens to them. Instead, we just wait in vain for Cap'n Jack to appear on screen again and gurgle something silly. Yay!

All in all, the film delivers everything you might expect, but in frustratingly small proportions – even the action, while not always as bad as this clip would suggest, ranges from fun swashbuckling, to tedious parrying, to outright terribly edited, CGI funk that completely defies any kind of physical presence. One moment in particular, when Depp swings down from a palm tree and somehow manages to knock a whole group of men down and then uses the rope to tie them to the tree all in one unbelievably swift movement is an example of where this fantasy film becomes too fantastical to follow.

There is still just enough to keep kids and those with a hard-on for the original trilogy entertained but the film is undeniably lacking in every respect. Which means it will undeservedly make gazillions at the box office and no doubt we can all look forward to Pirates Of The Caribbean 5: All Hands On Dreck.

More:  Pirates Of The Caribbean On Stranger Tides  Pirates Of The Caribbean  Johnny Depp  Penlope Cruz  Ian McShane  Geoffrey Rush  Stephen Graham  Kevin McNally
Follow us on Twitter @The_Shiznit for more fun features, film reviews and occasional commentary on what the best type of crisps are.
We are using Patreon to cover our hosting fees. So please consider chucking a few digital pennies our way by clicking on this link. Thanks!