Here we have a film that is simultaneously an antidote to the pop-gurning mime-fest of Glee and an offender of exactly the same kind of squeaky clean routines. One that spends as much time smiling through faux music video stage dancing as it does making fun of acapella groups for being "lame". In short, it is both refreshingly funny and teen-panderingly cheesy. Ladies and gentlemen, to use the appropriate parlance, it seems we have here what all the young kids these days refer to as a 'mash-up'.


Luckily, the balance is struck so perfectly that, by the time the film has faded completely into a pop medley underdog story with stage school kids showcasing their bland, marketable talents, you're already fully invested in the outcome.

Sure, you may still roll your eyes as these twenty-somethings pretend to be college students learning life lessons through the power of song, but with some edgy one-liners, some utterly puerile gags and some hilarious character work throughout, you won't even care. In fact, you'll even stop wondering what the fuck 'regionals' are. 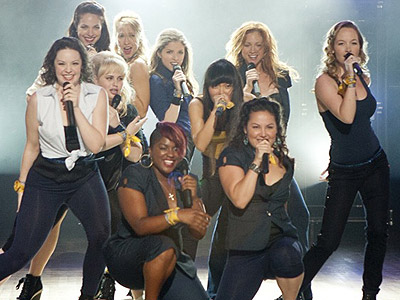 Artist's impression of some people Regionalling.
And yet the clash in tones IS obviously counterintuitive. Anna Kendrick's Beca (sic - ugh) surely lives in a world where Glee exists and she thinks she is above it all. As attempts to recruit her vocal chords by officious acapella group leaders Aubrey and Chloe fall flat, Beca even ridicules such singing ventures - after all, we all know that Glee is just the worst, right? But then we learn that her real passion lies with DJing and, more specifically, mixing songs, and her dreams are then presented in an equally lamentable fashion until we all learn that we can achieve anything we want if we just try to be the best us we can be. Or something.

So, early on, it is revealed that Beca has a particular talent for combining songs together and of course she brings this to the acapella group, which she has reluctantly joined. The problem is, everyone treats her like she has revolutionised singing, like she has singlehandedly created the 'mash-up' - as if no one has mixed two songs together before. But if Glee exists in this world, then everyone knows that's ALL they ever do. In fact another group in this film did it themselves just 20 minutes before these scenes.

And this isn't to mention the hundred other toe-curlingly hideous moments of pure teen cheese: Beca must learn not to keep people at a distance, she must realise the responsibility she has in looking out for her newfound friends, and she must learn to appreciate her love interest's own broadly-sketched aspirational dream: to score movies.

But, as I said before, all these cringeworthy aspects of the script are washed away very early on with a large, tall glass of funny. Kendrick is as delightfully watchable as ever - sharp, cynical but loveable all the same - while the rest of her singing buddies each contribute a different comedy character, from the overly controlling Aubrey to the low-volumed Lilly. 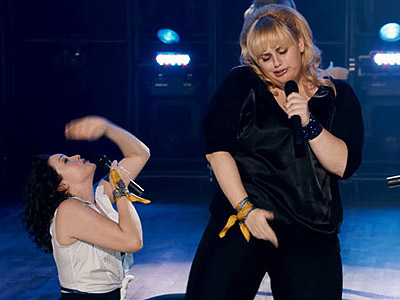 Hilarious crotch-grabbing will cover a multitude of sins.
It is, however, Rebel Wilson who really steals the film. Playing Fat Amy, Wilson is obviously frequently let off the leash in scenes, allowing for her to pipe up with hugely quotable punchlines ranging from the mildly offensive to the downright surreal.

So come the film's end, you may wonder how you were brainwashed into tapping your feet along with the show-stopping finale. Or indeed how a film that, from the start, seemed to be a parody of sorts, but then ended up relishing exactly the same kind of all-singing, all-dancing PG-rated fun that would normally make you want to kick each cast member in the throat. And yet, the film more than adequately makes up for the overly saccharine ending with an incredibly funny journey to get there. Oh god, wait - I didn't mean to say 'journey'. Noooooo! (*gets drowned out by a million people singing Don't Stop Believin'*)

More:  Pitch Perfect  Anna Kendrick  Anna Camp  Rebel Wilson  Pitch Perfect
Follow us on Twitter @The_Shiznit for more fun features, film reviews and occasional commentary on what the best type of crisps are.
We are using Patreon to cover our hosting fees. So please consider chucking a few digital pennies our way by clicking on this link. Thanks!