When I remember the house parties I went to in my teens, I can only really recall people vomiting, broken household objects and people attempting dangerous physical pursuits. They weren't epic by any means, but they were reckless affairs fuelled by crippling amounts and combinations of alcohol, and often resulting in shame, guilt and remorse the next day. And yet, I will maintain to this day that I had an awesome time at those parties. So it is with Project X.


The found footage style somehow finds its way to the party movie, as we follow three high school kids organising a 'soirée' that ends up turning into a massive, out-of-control bingefest spilling out at all sides. The house is trashed, the police are called and there's even (*gulp*) nudity and drugs. And all they wanted to do was to look cool and "get pussy". 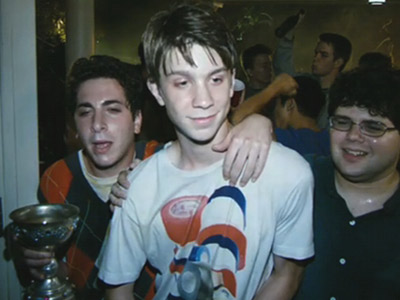 
It's a stupidly simplistic premise that lacks heart - other than some occasional will-they-won't-theying between Thomas and childhood friend Kirby, the whole film is crass, crude and does little more than show a series of drunken, increasingly destructive antics. But by god it's funny.

Imagine Superbad filmed as a mockumentary and you'll come pretty close to sizing up this film. While Thomas is the sensible, out-of-his-depth everykid, best friend Costa is the star of the show. He's a tits-obsessed party organiser, geeky enough to insist on drinking out of a goblet, but well connected enough to arrange every debauched aspect of the shindig and make sure Thomas celebrates his birthday in style. Making up the trio is JB who seems to only be there so that Costa has someone at which to aim all of his fat jokes. Of which there are many.

But when JB insists that he's 'working on' a potential lay, it's hard not to laugh when Costa replies "the only thing you're working on is diabetes". It's dressed as banter rather than mean-spirited bullying, and the film pushes the boundaries of this distinction a lot throughout the film, but it just about gets the balance right. 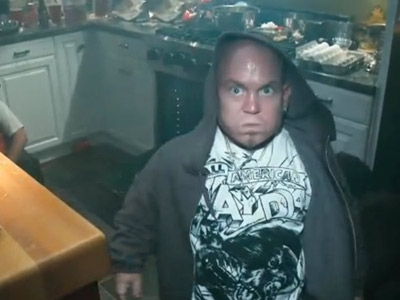 Except for when it comes to midgets. They're fair game.


Of course the film suffers from some major flaws. While the events are all videographed by stranger-to-the-group Dax, his almost total silence and utter inability to have any effect on the onscreen action seems far too convenient, and smacks of lazy writing and of using the found footage device for the sake of it. And then there are a couple of odd moments where the film seemingly forgets the format altogether, such as a typical slow-mo intro for a barrage of hot girls turning up at the door. Clearly the funnies and the chaos are more important to director Nima Nourizadeh than keeping up the pretence of how it is all presented.

And yet, just like the partygoers currently doing tequila shots off each other, who cares, right? We're here to have fun. It's humour of the lowest, Daily Mail-derided form but its easy to get caught up in the carefree spirit of those onscreen. Suddenly, watching a midget punch a series of guys in the balls IS funny. A dog on a bouncy castle? Downright hilarious. 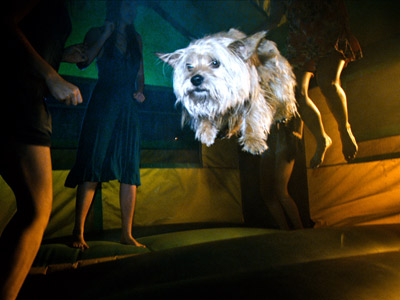 (*gives the film an extra star*)


The last 20mins or so are less fun than the rest of the film because the anxiety-inducing recklessness gets too out of hand to really enjoy, but overall it's silly, immature and capable of prompting several loud guffaws. There'll be many middle-aged, middle class haters declaring it morally bankrupt, but most will be able to file it under 'Guilty Pleasures' alongside Jackass, Bachelor Party and...er...forcing your pet to dance on its hind legs.

More:  Project X  Nima Nourizadeh  Thomas Mann  Todd Phillips
Follow us on Twitter @The_Shiznit for more fun features, film reviews and occasional commentary on what the best type of crisps are.
We are using Patreon to cover our hosting fees. So please consider chucking a few digital pennies our way by clicking on this link. Thanks!