Last week we ran a pictorial feature on what it would would look like if movie posters had to be honest (maybe you've heard of it, *pout*), so Toy Story 3 became You're Going To Cry, Winter's Bone was Poor People Are Depressing, and so on. My honest review title for Rabbit Hole - which is decidedly cryptic, might I add - would be The Grief Olympics, with Nicole Kidman and Aaron Eckhart in competition to see who can act the saddest.

We join Becca and Howie eight months after their four year-old son Danny is hit by a car and killed. Emotions are still raw; they avoid their neighbours, bicker with family members and attend group therapy sessions populated by "God freaks". Rabbit Hole is the story of how this couple cope with their grief, or utterly fail to cope, as the case may be. As you might imagine, levity is in short supply, even if Empire magazine did call it "unexpectedly hilarious" (yeah, maybe if you're tripping balls at the time). 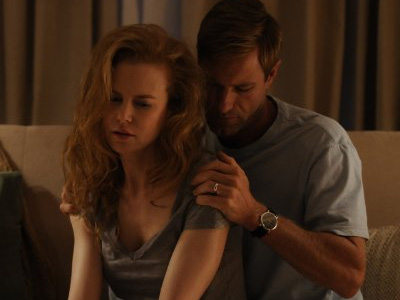 
I have no problem with a movie that tackles a difficult issue such as the loss of a young child, but the set-up does tend to feel a little aimless. It's less a linear narrative, more a series of fragments of Becca and Howie's lives. They'll try anything to take their minds off their tragedy - bowling, smoking pot, making unscheduled visits to work - but the truth can't be avoided, and it rarely feels like the movie progresses as a result.

Kidman and Eckhart are both mightily impressive, and both nail the award-baiting opportunities to a) fly off the handle and become super-aggressive, and b) break down in moments of emotional introspection. Rabbit Hole feels like a showcase for its A-list cast to flex their theatrical muscles; it's a delicate glass cabinet of a movie that's meant to be placed on a shelf and admired from afar but never really touched.

The supporting cast warm the mood a little; Dianne Wiest is great and receives the brunt of daughter Becca's barbs, while Sandra Oh is superb as a fellow griefer somewhat closer to the light at the end of the tunnel than the central couple. Young newcomer Miles Teller plays perhaps the most complex part - that of the driver who accidentally killed poor Danny - and carries it off with awkward ease; his curious relationship with Kidman is one of the movie's high points.

Rabbit Hole is hardly what you'd call a date movie, and it's difficult to see what kind of audiences it'd appeal to outside of awards season chin-strokers. It's well-written and boasts two brilliant performances but ultimately, The Grief Olympics proves almost too exhausting to keep up with. Still, it's got a brilliant poster - although you'd have to be a complete and utter sadist to put it on your wall. 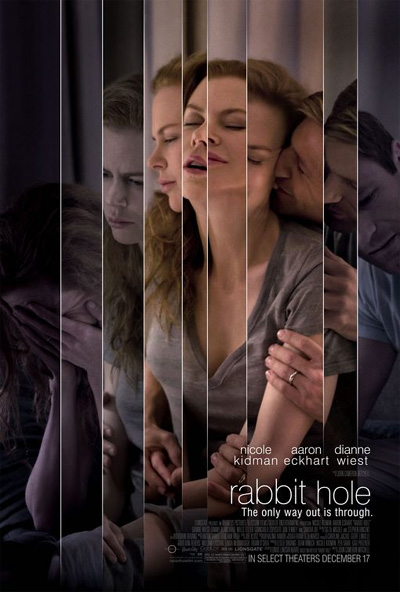 This baby is going right next to Bad Boys II.
More:  Rabbit Hole  Nicole Kidman  Aaron Eckhart
Follow us on Twitter @The_Shiznit for more fun features, film reviews and occasional commentary on what the best type of crisps are.
We are using Patreon to cover our hosting fees. So please consider chucking a few digital pennies our way by clicking on this link. Thanks!