Is he though? The most corrupt cop we've ever seen onscreen? Really? Even if you take both Harvey Keitel's and Nic Cage's Bad Lieutenant out of the equation, that's still a bold statement given that, according to a stat I just made up in my head, 70% of ALL THE FILMS EVER MADE features some kind of law-breaking, double-crossing dirty cop. Frankly, this claim - like the film - doesn't stand up well to close scrutiny.

Not that Rampart suffers from plot holes or implausible story events. Rather, in a film that so clearly focuses on character and performance...er...there actually isn't much else to it. For all the talk of murder, abuse of power and conspiracy, all of which suggest a bigger picture of police corruption, we are only ever privy to Woody's bad cop - and he isn't giving anything away.

Playing Dave 'Date Rape' Brown (a nickname given to him following accusations that he murdered the lead suspect in a rape case), Woody convinces as a conflicted man losing his place in the world. As an investigation to seek out corruption in the LAPD sets its sights on him, Dave finds himself in deep and deeper trouble as he struggles to give up his more controversial police methods and desperately tries to cling on to his job. With a series of allegedly illegal acts under his belt though, Dave is relying on cock-sure denial and a half-smart, half-bluffing knowledge of previous legal precedents. 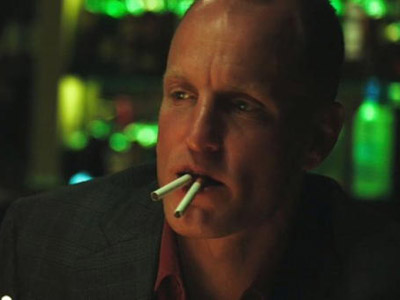 At the same time, his complex career history mirrors his tangled home life. Living with both of his ex-wives - who are sisters (Ow! High-five, Dave!) - this outmoded top police dog is undermined by the spouses that emasculate him at every turn and the daughters - one from each sister/wife (*puts high-five hand down*) - that disrespect him.

Despite Dave's stubborn self-righteousness as a cop, Harrelson plays him with tenderness and a subtle degree of loneliness, an aspect of character emphasised by his frequent requests to the women he encounters: "Will you sleep with me tonight?". He is less looking for some greasy truncheon action and more for company and companionship. It would have been easy to portray Dave as a bull-headed, short-tempered, cocky sonofabitch, but Harrelson defies the obvious character directions here, internalising Dave's frustration and occasional paranoia to give possibly the most nuanced performance of his career.

Unfortunately, the film doesn't present us with much more than this. Yes, Dave is a racist, he's a sexist, a bigot, a homophobe - he's a dinosaur - but what of it? We see him struggle with his changing workplace, with him being made a scapegoat and, most tragically, with him trying to stay a part of his family's life, but there's very little in the way of tangible conflict in this film. When everything is internalised, back stories are hinted at and decisions are made behind closed doors, this film ends up more of a snapshot than a relatable narrative. 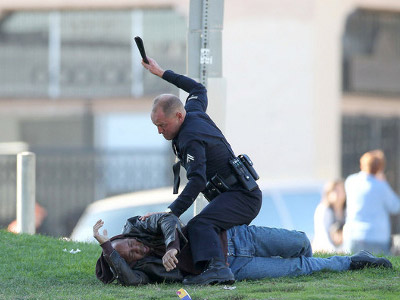 Unfortunately, it's not THIS snapshot - this seems way more exciting

Meanwhile, the space around Woody Harrelson is filled up by vastly talented actors in shockingly small roles. Ben Foster is astounding as the wheelchair-bound ex-veteran tramp that chinwags with our dirty cop, Sigourney Weaver is the closest we have to an antagonist, anchoring the case against him, and Robin Wright provides fascinating contrast as a needy defence lawyer who "loves to suck [Dave’s] cock"...but, with their minor roles, they all have little effect in a film that essentially feels like it has nothing to say. Even Steve Buscemi pops up in one scene. ONE SCENE. I don't even know who is character was or what he did. Maybe he was playing himself?

It's a shame then that a film so mesmerising with its onscreen talent ultimately falls rather flat. You get the impression that the film is as conflicted as its protagonist: trying to be both an arty character study and a dynamic drama at the same time but unable to excel at either.

More:  Rampart  Woody Harrelson  Oren Moverman
Follow us on Twitter @The_Shiznit for more fun features, film reviews and occasional commentary on what the best type of crisps are.
We are using Patreon to cover our hosting fees. So please consider chucking a few digital pennies our way by clicking on this link. Thanks!