Matt reviewed Red State earlier this month. As it's out today, here's a fresh reminder of his crazy thoughts and opinions.

In recent years, the loud-mouthed, foul-mouthed Kevin Smith has become the very antithesis of his former silent onscreen persona. With a network of daily updated podcasts sprawling out from his Smodcast.com website, Smith is even intent on giving up filmmaking altogether so he can just…um…‘talk’ for a living. But after Cop Out was torn to shreds by ‘biased critics out to get him’, Red State is a one-man retort railing against the Hollywood system. For all his often very funny stoner ramblings, it seems that, with this film, Smith is actually trying to say something.


And, by Christ, does he like to say it. The furore that has surrounded the release of this film, with Smith financing and distributing it himself, independent of studio involvement, has by far overshadowed the film itself, which is really, at its most basic level, just an interesting take on the campsite horror genre. If Red State is saying anything, it’s a giant ‘fuck them up their stupid asses’ to everyone whoever criticised and discounted the too fat to fly guy. And, with Smith’s unique money-making model for the film proving successful, he makes the point rather well. Whether there is actually any message of worth within the film itself, though, is another matter.

Taking a major departure from his career to date (snootchie-bootchies or otherwise), Smith follows up Cop Out with an intended horror-show this time, in which three high school kids in densest middle America drive out to meet an anonymous woman who has, via an online hook-ups site, offered them a foursome. It turns out though that this is just a crude trap set by a local fundamentalist group who wish to punish the wicked and promiscuous. As the group, led by cult preacher Abin Cooper (Parks), fail to keep a lid on the kids’ captivity, an armed government unit is soon despatched to quell the church-turned-terrorist uprising. 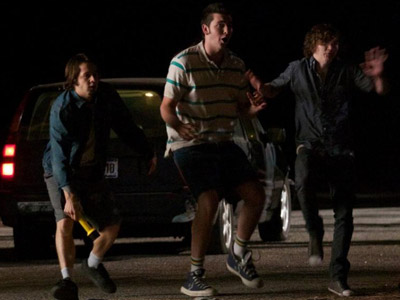 There may or may not be a dance sequence too


As far as set-ups go, there’s no denying that this is a great premise, with Smith once again playing on his church experiences, this time to envisage a fundamentalist ‘family’ as an extreme force of horror. Just like a group of inbred hillbillies can be terrifying with their warped view of outsiders, so too can Cooper’s following with their unwavering beliefs and rigid sense of morals.

Unfortunately, Smith is so clearly out of his comfort zone with this film that amateurish aspects creep in at almost every level, with the primary problem being the script. Frankly, the story is all over the fucking shop. At first we follow Travis, Billy-Ray and Jarod as they allow for some good ol’ Smith-style sex talk on the way to their dangerous liaison but, following their capture, focus shifts to John Goodman’s Armed Forces Chief. At some point later on, we see a woman within the religious group battle with her conscience and try to make amends for the group’s wrongdoing, but by this point we haven’t really been given a reason to care about any of these characters. Changing the point of view is no problem in theory, but it only works if the characters are each fleshed out enough for us to root for them – a quality sorely missing from almost everyone on screen.

And it’s not just the overall story that suffers. The pinpoint sharp dialogue that became Smith’s trademark in his earliest films is rare here. Instead, the script ranges from lazy (the film starts with the kids apparently being taught Exposition 101 in a classroom) to mind-numbingly boring. While Michael Parks clearly relishes a scene in which his creepy righteous preacher gives a sermon for 15 minutes straight, with nothing else going on in the film, it is ultimately inconsequential, dull and it feels like it lasts for more than an hour. Great acting? Yes. In any way necessary? God, no. 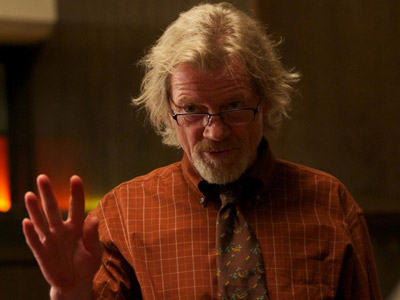 To get an idea, stare at this picture for the rest of the day.


Similarly, John Goodman’s introduction in the film sees him having a long phone conversation, which, as we are not privy to the other end of the line, makes for very tedious viewing. These monotonous monologues are a far-cry from the snap-fire dialogue that made Smith’s name, and this is a point proven when a late scene between Goodman and his supervisors turns out to be one of the most interesting and fun moments in the whole film, thanks to some great one-liners and entertaining banter.

It’s fair to say though that, while the writing doesn’t live up to expectations, the film is saved somewhat by some superb acting, particularly from Parks and last year’s Oscar winner Melissa Leo, who plays Sara, the teens’ woman-bait trap but also a repressed devotee to her faith and Cooper’s cause. Kudos too to the three young actors, Michael Angarano, Nicholas Braun and Kyle Gallner, who all make a brilliant transition from sex-obsessed teens to terrified victims with surprising commitment. John Goodman on the other hand just plays John Goodman, but is enjoyable to watch all the same. 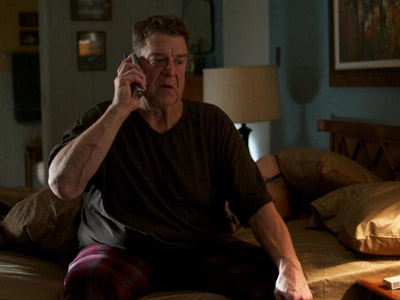 This is how Goodman approached the role


As the film picks up pace again and the actors’ performances look like they might be enough to carry the film, we hit upon a final and fatal stumbling block: Kevin Smith just can’t direct action. An extended shoot-out sequence contains frown-worthy moments at every turn – as bullets whizz by, John Goodman conducts yet another phone conversation, one of his men happily walks out in the open gunfire unharmed and Michael Parks, hiding in a room with shots exploding everywhere, just ducks in and out of a window apparently sensing no real danger.

Overall, the film is an unfortunate mess that feels three times longer than its 88-minute running time. The characters are one-dimensional, the plot is a shambles and the preaching gets so tedious you’ll be praying yourself for divine intervention. Some excellent performances aside, this is a film that sees Kevin Smith saying all the wrong things.

More:  Red State  Kevin Smith  Michael Parks
Follow us on Twitter @The_Shiznit for more fun features, film reviews and occasional commentary on what the best type of crisps are.
We are using Patreon to cover our hosting fees. So please consider chucking a few digital pennies our way by clicking on this link. Thanks!