A long time ago in a ranch far, far away...
It is a dark time for George Lucas. Forced to put his
WWII project on hold and desperate to tell the stories of
the Tuskegee Airmen, the first African-American fighter pilot
squadron, Lucas was told 'No' by the evil studios, who deemed
a film with an all black cast unmarketable. 23 years later, a time
when Hollywood wasn't quite so racist, Lucas finally made his film,
thanks to galactic bucks from his own, overflowing Death Star wallet.

If you'll excuse the cheap attempt to make that opening paragraph read like a Star Wars opening plot crawl, the facts are correct. Entirely funded, produced and overseen by The Beard himself, Red Tails is George Lucas' pet project. It might credit first-time director Anthony Hemingway as the pilot, but we all know George was running things from the control centre. Reports that Lucas forced Hemingway to grow a beard and wear a chequered shirt during production, however, are unfounded.

Based on real events but with a fictionalised tale wrapped around it, Red Tails tells the story of the 332nd Fighter Group in the Tuskegee Training Program. Faced with segregation and racism throughout the war, the men were left flying routine scouting missions in hand-me-down planes, or occasionally picking off German scraps from the frontline. When finally called into combat, they impress their military superiors with their show of courage and zero casualties. After countless successful missions over Italy in 1944 and 1945, they become one of the most decorated flying squadrons in US Air Force history, sticking it to the man in the process. 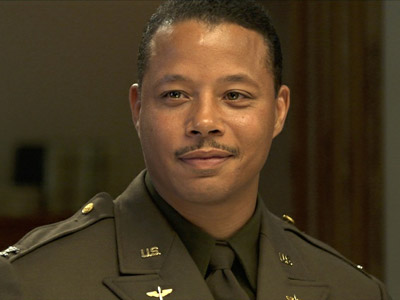 Terrence Howard, current record holder of most things stuck to the man.


Behind the true-to-life heroisms, the focus centres on Joe 'Lightning' Little (David Oyelowo), a cocky, risk-taking pilot desperate for some action - in the skies and in bed - and his boozy BFF Marty 'Easy' Julia (Nate Parker), sporting a Lando Calrissian moustache. Meanwhile, Terrence Howard and Cuba Gooding Jr are left on the ground to argue with the white folk, look official, give rousing speeches and smoke pipes.

When the planes leave the ground, that's when the film itself takes flight. The stunning, albeit CG-heavy aerial dogfights are perhaps the best-looking ever committed to screen. Sweeping shots of planes swooping, darting and dodging about the skies, shooting down Nazis and offering quick cuts to the cockpits; you can see the Lucas influence hard at work. 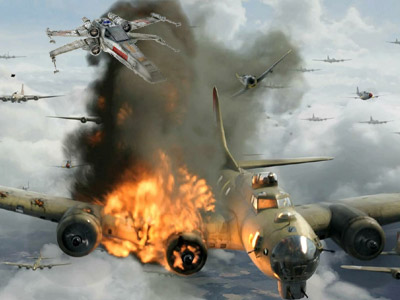 Man, they just don't put the effort into those easter eggs any more.


Unfortunately, when the film lands back on the tarmac, it wobbles like a plane caught in a strong cross-wind. A laborious narrative struggles to plug the gaps between flights and fills it with racial struggles, fights, Ne-Yo playing a guitar (on more than one occasion) and an ill-advised romantic story. There's an overshadowing feeling the film was built around the admittedly impressive action scenes, and everything else, from characterisation to story, were afterthoughts. You'll quickly begin to feel like the pilots on the runway, impatiently waiting to take off again.

Red Tails is a glossy, Indiana Jones-esque depiction of WWII; a diluted war, safe for children's eyes. There's no Saving Private Ryan level of bloodshed here. This means that despite lives being risked and death stared in the face, there's little sense of threat or danger. They shoot Nazis, they laugh about it, everyone comes home happy. Even when a pilot ends up at PoW Camp, it's nothing more than a three-minute minor inconvenience. Never has war felt so light-hearted.

Thankfully, the realistic dogfights and a confident young cast making the best of a cliché-ridden script are Lucas' saving grace. On balance, they make up for a film that struggles to get its landing gear up.

More:  Red Tails  George Lucas  Terrence Howard  Cuba Gooding Jr  Anthony Hemingway  Bryan Cranston  Michael B Jordan
Follow us on Twitter @The_Shiznit for more fun features, film reviews and occasional commentary on what the best type of crisps are.
We are using Patreon to cover our hosting fees. So please consider chucking a few digital pennies our way by clicking on this link. Thanks!