Review: Alita: Battle Angel has one foot in the future, one in the past Does James Cameron's name attached to a movie mean anything anymore? With the skidmark of Terminator Genisys refusing to fade from the collective pop culture underpant, and the inevitable Avatar sequel debacle still a few merciful years away, we have a new Cameron project to mull over in the meantime. Alita: Battle Angel, a live-action sci-fi epic based on a popular Japanese anime, has been on JC's to-do list since the early 2000s but he's finally delegated it off his plate, handing over his dusty old screenplay to best pal Robert Rodriguez. I don't like the phrase 'sloppy seconds', but, well, I've said it now, it's out there, and in actual fact, in saying it I've basically answered the question I set out in the first line, so here we are, the review has begun, strap yourselves in everyone.


Alita: Battle Angel is a movie that feels at least 20 years out of time. It has a very distinct visual identity that places it firmly alongside scuzzy sci-fi otherworld action epics like Waterworld. It makes no effort to update any of the clichés inherent in the post-apocalypse genre that others may have avoided, no concession to update the tired old tropes and character archetypes that felt fresh and fun when it was written but cause severe eye-rolls in 2019. Alita: Battle Angel is a movie that sells itself on the fact it has an ass-kicking teenage girl as its hero, like that absolutely hasn't been the USP of every second action movie released so far this millennium.

As a result, it feels like a contradiction in terms – a bleeding-edge sci-fi movie about cyborgs engaged in a battle for the future that's set in 2563 but feels grounded in 1993. It has an entire action sequence that is a direct lift from The Phantom Menace, for goodness' sake.

It's a movie that seems very comfortable with being square, a movie that embraces retro, a movie without shame, for better and for worse. Ed Skrein's character, for example, is a cyborg bounty hunter with the body of the T-1000 and the face of Matt Goss, and he speaks with an extremely over-the-top Cockney accent. He drinks in an underground bar for "street punks" and other bounty hunters that have names like 'Screwhead' who drink futurebeer and fight each other and scoff loudly at outsiders while they pet their robot dogs. At any point, any of the dozens of credited writers, producers and executives could have piped up and said 'You know what guys, this scene where Alita instigates a fight in a seedy bar full of rowdy cyber-punks feels quite a lot like something that would have happened in the Sylvester Stallone motion picture Demolition Man, and that was released in 1993, so, y'know, what are we doing here?' But no. This appears to be the general vibe that Cameron, Rodriguez et al were going for. And honestly, I can't help but admire a film that feels so resolutely old-fashioned. 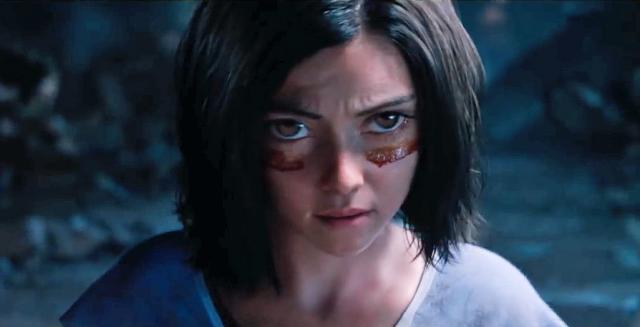 Does it help if I point out this is dog blood? No? Okay.


The issue Alita: Battle Angel has is that it's barely a movie at all – if I'm being generous, I'd say it's two thirds of a movie. The last act just does not exist. It's a film with zero payoff. Set-up, on the other hand? Oh, it's full of it. Alita: Battle Angel goes to great lengths to ask questions of the audience – Who is Alita? What happened in her past? Who is the mysterious Dr Nova that rules the mysterious floating sky city of Zalem, and come to think of it, what's the deal with mysterious floating sky city Zalem? – but it has absolutely no intention of answering them in this movie. It's a ballsy move to withhold your entire third act in a sequel. Another way of putting it is that it's a massive cop-out, a total fraud and, in this uncertain cinematic ecosystem, a near suicidal move to bank on a follow-up. It features as unsatisfying a blockbuster finale as I can remember, unless you find made-up ultraviolent future sports exciting. 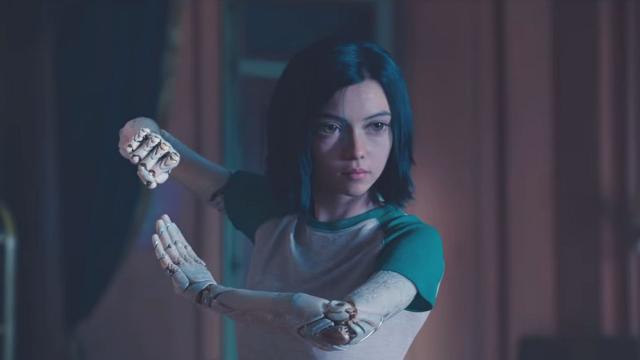 
The basics are solid, but you still leave feeling like you've been grifted out of an ending. The movie's overly secretive narrative works against it, because at no point do you fully understand each character's role in the wider world, and you're never actually sure if the characters know more or less than you do. Alita: Battle Angel also lacks a decent villain, leaving Oscar-winner Mahershala Ali with nothing to do other than walk around Wearing Sunglasses in a Big Coat with his Arms Behind His Back like a Bad Guy TV Trope page come to life. You're forever waiting for motivations to be revealed, and it's no spoiler to say that you will continue to wait, long after the film has ended.

It all depends on how much you're willing to forgive for a quick blast of no-strings action, and I guess, how much stock you place in the name of James Cameron. I'm from an age where his name on a movie's poster meant something, and I feel like that message has been so diluted now as to be almost meaningless. If Alita: Battle Angel was Cameron's official follow-up to Avatar and Titanic, the two most successful movies ever made in case you forgot, then it'd have to go down as a disappointment; framing it as the latest movie from the director of Spy Kids, on the other hand, makes it feel less of a let-down and more of a fun, if fleeting, distraction. So well done James for delegating, I guess.

Additional observations:
- The kid who plays Hugo, Alita's love interest, is really not good, at all. He's a very outdated idea of a teen hunk, right down to his Backstreet Boys floppy hair and his cool guy bandana. He's so bad I automatically assumed he was Robert Rodriguez’s son, but he’s not.
- There's a bit of an ick factor, because the first iteration of Alita we see is a young and giggly teenage girl, but then later, when she receives a body upgrade, Christoph Waltz’s assistant says something like "Looks like she's a bit bigger than you thought" and that's when her outfits get a bit less cutesy and a bit more 'men with neckbeards will wank to this'.
- The scene that's a direct lift from Phantom Menace is the futuristic sport of 'Motorball', substituting for the podrace – it's essentially a super-violent competitive sport-slash-race that the young hero takes part in, in order to raise some money to achieve a dream. There's even a cheesy Greg Proops-style commentator. The different in Alita: Battle Angel is that the race is basically abandoned halfway through and the necessary victory is ignored, making the tenuous reasons for its inclusion even more of a waste of time.
- I sincerely hope Jeff Fahey's robot dog guy gets more lines in the sequel.

More:  Alita Battle Angel  James Cameron  Robert Rodriguez  Rosa Salazar  Christoph Waltz  Jennifer Connelly
Follow us on Twitter @The_Shiznit for more fun features, film reviews and occasional commentary on what the best type of crisps are.
We are using Patreon to cover our hosting fees. So please consider chucking a few digital pennies our way by clicking on this link. Thanks!