Review: Bros: After the Screaming Stops drops the boys in at the deep end 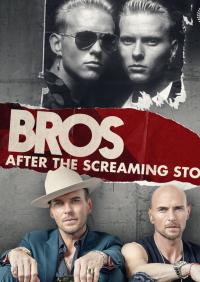 Echoing throughout Joe Pearlman and David Soutar's documentary are the words of Terry Wogan to Bros: "What are you going to do when the screaming stops?" It's a question pop bands with a predominantly teenage female audience have been asked from The Beatles onwards, based on the assumption that pop fandom is transitory; a girlish fad that will inevitably be grown out of. Certainly for most it abates as you grow older, but it lies dormant, easily rekindled by a Google image search, or the discovery of a dusty mixtape in a drawer, pocked with hand-drawn hearts.


Or the announcement of some reunion shows: big business in the music industry these days, with your formerly teenaged fans prepared to get a babysitter and fork out £60 for a night at the O2. For Bros, who were briefly the biggest thing in the actual bloody world in the late eighties, this 2017 comeback was as out of the blue as it was fraught with danger. Twins Matt and Luke Goss had hardly spoken since the band split in 1992, and Luke had barely picked up a drumstick.

So we get a run-through with archive footage and voiced-over interviews of their short-lived dominance, oddly light on the songs, revealing some things that might have been public knowledge at the time but I was unaware of, having been about nine. (My memories are of having Push on a cassette, and of Gary Weekes, an impressionable sort, telling me excitedly in the school lunch queue how high Bros could jump.) Things like a family tragedy right at the height of their fame, immediately after which they were obliged to go on TV and do a frothy interview.

This is just the sort of thing a good music documentary should uncover, adding context to the performances and, in the case of a band like Bros, shedding light on the strain involved in maintaining an uncomplicated public face. A strange feature is its total whitewashing of original bass player Craig Logan's involvement in the band though, and it's so absolute that it must have been an editorial decision. Logan ("Ken", as Smash Hits always called him, an in-joke never explained and one I enjoyed all the more for it) appears in the archive footage where it's unavoidable, but I don't think he's once mentioned by name, and the fact that he left between their first and second albums doesn't come up. In itself this makes you suspect a certain amount of creative control on the twins' part, and colours the rest of it somewhat. 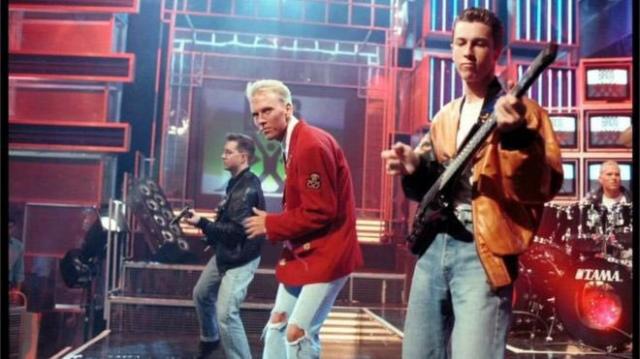 Ken, out front where he belongs. I haven't forgotten you Ken.


Its selling point is the mountain face towards which the plane's hurtling, though: the O2 arena. Matt has been a musician ever since the split, with solo albums and a Las Vegas residency behind him, so with preparations coming up and Luke having spent the last 25 years concentrating on acting, he's better prepared. As such, he's got some opinions about the arrangements, and so once we're in the rehearsal room, hooo boy. We can't very well imagine the enmity that's built up between twins who achieved huge success as a unit and then spent a quarter of a century barely speaking; it's just on another level of tension. But shovel on top of that the resentment a drummer feels towards the singer who was often thought "the talented one". Then imagine the bastard was even thought "the good-looking one", when he was your identical twin. (And he's kept his hair when you've lost yours: how does that even work when you've got the same DNA?)

The arguments are painfully uncomfortable to watch, and one in the make-up room before an appearance on breakfast TV especially nasty. But this is leavened throughout by the brothers' interviews to camera which, Matt's especially, are wonderfully and hilariously earnest. (One in which Matt recounts the story of a bodyguard taking a candid photo of him in the bath to sell to the red-tops would be pitch-perfect Partridge if he'd meant it to be.) There was a directorial choice to make here, knowing that all this material was there and that you had the opportunity to stitch them up a bit and create an unintended Spinal Tap, but Pearlman and Soutar take the high road, allowing the space to let the laughs come without letting it slip into mockery.

So there's affection here: for the notion of fandom, which is treated with dignity, the middle-aged Brosettes never poked fun at, and for a pair of brothers whom the film seems to care about. When they argue the camera almost seems to want to leave the room, mortified, and when they're taking themselves a bit too seriously it doesn't linger long enough that it's in on the joke with you.

More:  Matt Goss  Luke Goss  Bros
Follow us on Twitter @The_Shiznit for more fun features, film reviews and occasional commentary on what the best type of crisps are.
We are using Patreon to cover our hosting fees. So please consider chucking a few digital pennies our way by clicking on this link. Thanks!