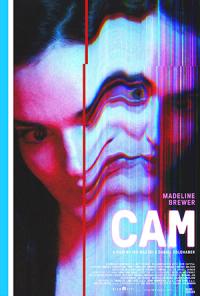 The internet is wonderful. Just the other day I traced my family history, recovered a lost set of IKEA assembly instructions and watched a monkey fuck a frog in the mouth. But there’s a dark side. There are areas of the internet that encourage horrible behaviour, such as giving racists a platform for their hate speech, or letting nerds have a place to argue about Transformers or whatever. And then there’s the murky morals of online sex stuff, which this film sheds a light on. It’s a thriller set in the world of ‘cam girls’, who are participants in ‘pornographic’ materials. These are images and videos of ‘nudity’ and ‘sexual acts’, none of which I knew existed online before, and I have several blank Incognito windows open on my computer to prove it.


Fear not, prudes; there’s not actually much in the way of explicit content here. Instead, the film focuses on the lonely and shallow existence of cam girl Alice (Madeline Brewer), known to her dedicated community of affectionate masturbators as Lola. She is obsessive in performing daily themed live shows, trying to keep interest up and grow her following all with the ultimate goal of breaking into the Top 50 ranked cam girls on her site.

The thriller element comes when one day she finds herself locked out of her account, but her feed is still running with an apparent doppelgänger continuing her work and pushing the sexual envelope with each new show. Who is this new girl? How does she look exactly like Alice? How is it possible that even her home looks exactly the same? It’s an existential mystery that never ends up giving obvious answers, even if the final resolution never quite lives up to the premise. In any case, given that this is a film set in the world of titillation and online wank banks, it’s a great achievement that director Daniel Goldhaber manages to keep proceedings feeling wholly sinister rather than as plainly ridiculous as the phrase ‘sexual envelope’ I used back there. 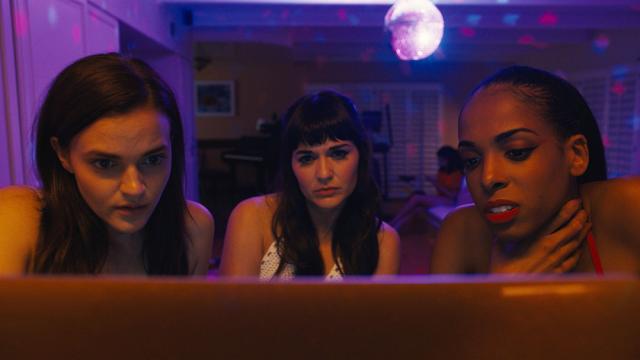 
“I don’t do public shows, I don’t tell guys I love them and I don’t fake my orgasms” Alice states early on as her set of guiding principles. But these are tested in turn as she becomes increasingly desperate in her attempts to reclaim her status as Lola and regain the love and attention of her adoring forum friends.

There’s a social commentary in the way that we see Alice living her fake life so enthusiastically while it completely takes over her own real one. There is also an astute cleverness to Alice that shows she is no mere victim of circumstance, but someone who is courting her own popularity in calculated ways, such as cycling through a series of pre-taken sexy selfies on her phone to post at an optimum time, playing up to her fanbase with well-timed assets.

There is, of course, also a tragedy to all of it. One scene sees Alice imitate a steak dinner date night on camera, eating alone in front of an unseen audience who are all making outrageous requests and tipping her enough money to make sure she follows through on them. Another moment sees the film cutting from her having a mechanically-aided intense orgasm on camera to her waking up the next morning in her own bed, alone.

All of which works much better as a character study, exploring the drives and motivations of someone who measures her self-worth in anonymous likes and engagement stats, foregoing her dignity in the process. There is a better drama to be found in this area; a complex journey for the protagonist of what can only be described as a self-exploitation film. 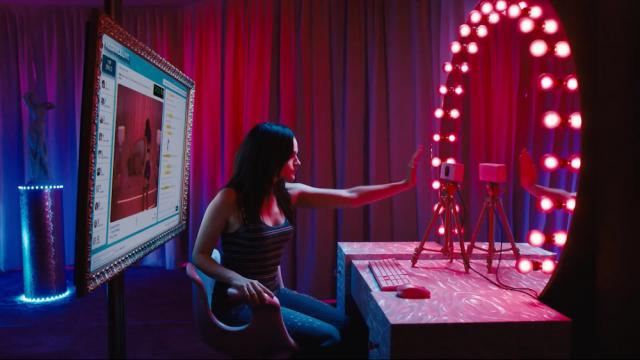 Using a mirror, because she’s bringing sexy backs back.


It’s the thriller element that lets the side down slightly though, with a set-up that generally underwhelms when explored beyond the surface. Also, you get the impression that Goldhaber frequently reaches for eerie chills given the supposed close proximity of Alice and ‘Lola’s’ live feed, but the physical distance between her and what’s being transmitted to her computer screen means that you never feel the sense of any real danger.

On the whole, Brewer is considerably impressive given how she basically carries every single scene, while rich neon photography from cinematographer Katelin Arizmendi keeps the film frequently looking sumptuous in spite of clear budget constraints. It’s a taut, interesting film with a unique premise, but ultimately one that is focused only on Alice trying to resolve her proposed physical threat rather than, at any point, looking inwardly and learning anything from the experience to achieve some kind of personal growth.

Besides all of this, however, is the fact that kudos should be given to the film for raising awareness about online pornography. It has been a real eye-opener for me and it has been educational in just learning that such a thing exists.

More:  Cam  LFF 2018  Daniel Goldhaber  Madeline Brewer
Follow us on Twitter @The_Shiznit for more fun features, film reviews and occasional commentary on what the best type of crisps are.
We are using Patreon to cover our hosting fees. So please consider chucking a few digital pennies our way by clicking on this link. Thanks!