Review: High Flying Bird shoots, hits the rim, bounces in off the backboard 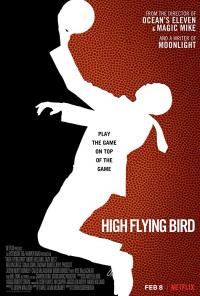 I am a sucker for a sports movie. Whether it's the technical aspects, a soppy love story or some team melodrama, they are my cinema catnip. I think it's because sport is a wholly silly artificial concept - something we invented after settling down long enough to think about what to do with ourselves next, so we decided to throw rocks into holes then invite the other caves over to see who could do it the best. Jump forward a few millennia and sport has become this hyper-commercialised beast that is embedded deep within the tribal part of our psyches. And even though I know that's a bad thing, I can't deny a primal urge to holler and wave a big foam hand whenever someone sprints up to do a slam dunk. GO SPAWTS!


Ronan Keating is an idiot. Life isn't a roller coaster; it's a game. Sure there are ups and downs, and sometimes you rock side to side, but these movements are determined by the choices we make - gambles based on previous experiences, or the tender advice of a worldly uncle. Those who succeed most have either equipped themselves with the knowledge to overcome obstacles in their path, or are gifted with prowess that gives them a natural advantage. Of the former, in Steven Soderbergh's latest (well, second) iPhone-filmed drama High Flying Bird, we have sports agent Ray Burke (André Holland), who sees the lines between the politics of basketball management and knows how to bend them, and, of the latter, there is hotshot rookie Erick Scott (Melvin Gregg), who is quite tall.

The pair find themselves caught up in a lockout - basically a big argument between wealthy team owners and executives over how much, or how little, the players should earn, which brings the professional leagues to a halt. Ray uses his savvy to concoct a daring scheme to keep his prize client in the spotlight during this downtime, but in the process risks burning bridges with his peers, while Erick could find his career tainted before it's even taken off. It's a neat setup that draws in all levels of the game - owners, agents, players, PAs, friends - as they debate the ramifications of Ray's actions, and what it means to play for the love of the game, or for the money. 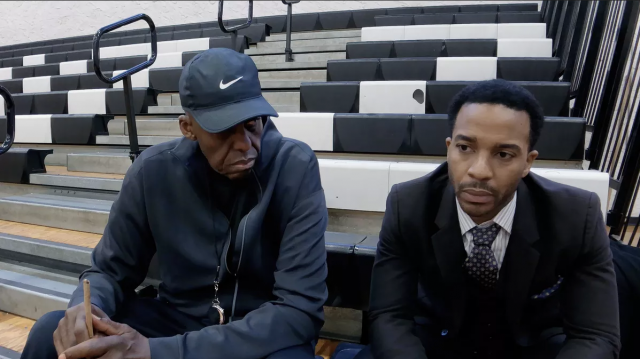 "Yes I know, Bill, you were in Predator. And Commando."


And debate they do. High Flying Bird is one of those talkies you've heard so much about. If you were expecting an exciting buzzer-beater finale, then I'm afraid to tell you there's not a dunk in sight. Scenes set in swanky restaurants, high rise offices, and even the intimacy of living rooms never stop to catch a breath as the dialogue flows. It's hardly electric, however, as writer Tarell Alvin McCraney has opted for more functional realistic conversations with erring human pauses and stumbles, rather than the wise-cracking lingo more commonly associated with films about street sports.

There's a lot of talk about cameraphones enabling new ways to shoot movies, but at the moment the results can still feel a little cheap (please don't tell Steven Soderbergh I said that). It's easy to imagine such a dialogue-heavy script would get chopped up by a more market-led studio than Netflix in favour of courtside action. Ray's plan may be audacious, but it's a touching final scene involving a gift that brings the most meaning and reveals the film's quiet philosophy of empowerment through self-education. It's just possible that studio tinkering could have derailed the film entirely, robbing us of a thoughtful, cerebral entry in this black renaissance period.

It's an exciting and necessary time for black cinema, with powerful stories emerging across seemingly every genre, arriving with an impetus that demands to be heard. And it's a fascinating time for filmmakers too, finding new audiences and methods of production and distribution, partly due to advances in technology, but also down to changes in attitudes. It's 2019 and it really does feel like anything can happen - all it takes is the guts to stand up and take your shot. So don't tell me life is an on-rails event where the course is already set, and our participation in all of this is simply to be born and die at the end without challenging the systems that keep us in place. That's a very blinkered perspective, Ronan.