Review: Last Christmas has everything she wants if you watch without prejudice

What's it going to be for George Michael, then? The Bohemian Rhapsody-style rock biopic? The Rocketman stylised musical? The Yesterday excuse to bump the songs up the list on Spotify a bit? Well, none of the above, really. Last Christmas is something a bit different: a festive romcom where his songs are there but largely non-diegetic, even though he himself is present in the form of posters on walls and in characters' conversation, so more of a tribute that informs a story. It's an affectionate and funny one too, and the kind that you recognise a fair bit is wrong with, but gosh-darn it, everyone's singing and having a lovely time, and it's Christmas, so just pour yourself a nice tall glass of mulled shut-the-hell up juice and go with it.


"Just go with it" is an awful approach to take to evaluating art, but the romantic comedy and the Christmas movie are the two types of film where it feels as if it genuinely masks flaws. They appeal to the heart not the head, y'see. If it hits me in the feels and a few strings start swelling in the background just at the moment when the guy realises that family was the true meaning of Christmas all along, I'll forgive most of what's gone before and head home happy enough. Many Christmas films have no narrative reason to even be set at Christmas, and this is one: a woman's made bad choices and needs setting straight and to reconnect with her family. Christmas and its associated togetherness is a decent enough shorthand for a solution to all this, so just do it all in December and it'll help the whole thing along a bit.

Woman: Kate, played by Emilia Clarke. Kate is a Girl Gone Wrong. We know this because of some pretty clunky signifiers: drinking, sleeping around, smoky eyeshadow, leopard-print coat. This struck an odd chord as far as I was concerned, because in framing the whole story as a pursuit towards "fixing" these things, Last Christmas is telling us that they're not the sort of choices a woman should be making. You could argue that it's only doing so in the context of this woman, but this is a Christmas romcom, lads: the themes are universal. There's no broader brush.

I'm inclined to give it an easy ride, frankly, because its co-author is Emma Thompson, who is an avowed feminist and a genius, and whom it's fair to say has done more thinking about the presentation of women in fiction than I have, and probably reached more nuanced conclusions. Maybe the brush breadth is the point: does a commercially driven feel-good film have any other way to communicate to its audience that Kate has gone down the wrong path and needs adjustment, without relying on tropes like these? I certainly don't have a better idea. Maybe society's to blame. Maybe the baby Jesus is.


We go about fixing her through Tom, a man who comes into her life and evinces qualities like wonder, spontaneity and compassion for others. He does this while dancing around her like Jiminy Cricket when he walks alongside her, and constantly encouraging her to look up, because people never do, and you'll always see something you didn't know was there.

Tom is, in truth, an absolute helmet, to the extent that I wondered if his character was going to be the desexualised nice guy she tries to love but can't, who exists to make her realise she shouldn't settle. (Bill Pullman in Sleepless in Seattle, you know the drill.) But no, this is him: irrepressibly nice, and here to draw out of her the qualities we know are in there.

Her journey is mainly taken through reconnecting with her family, and her mother in particular, played by Thompson, who's cannily given herself all the best lines (then again I thought the same about her role in Bridget Jones's Baby, and it may just be that they only sound like the best lines because she's the best actor in the world). An immigrant from the former Yugoslavia, she's overbearing and unheeding. Kate's reconciling with her is the real key to it, and Kate embracing her heritage and the idea that she's not alone in feeling alone, through some nicely unobtrusive anti-Brexit points, is another. What's rare and subtle is that there's no particular event through which mother and daughter come to understand each other better and reconcile; they just gradually accept each other through exposure and through changing. You could argue that the montage which follows in which they bond while trying food and doing shots at a Christmas market is less subtle, but it's set to Freedom '90, so shut up and dance. 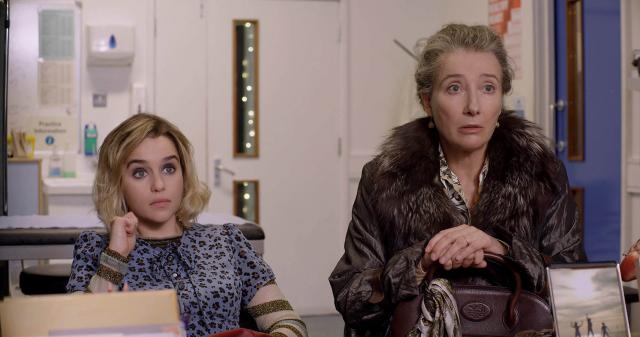 Finally, the Daenerys Targaryen/Nanny McPhee crossover real fans have been waiting for.


As for the music, it feels a bit peripheral at times. Last Christmas doesn't feel like a George Michael tribute, not that it has to, insofar as the themes of his songs aren't soaked through it. Heal the Pain comes up more than once but not quite enough that it's a leitmotif, and others come and go. The most impactful use is in how Praying for Time is deployed twice: first in its powerful studio version during a date scene, then later wearing its more contemplative, mournful MTV Unplugged clothes, when the scene is revisited with a different tone. None of this adds up to a celebration of the songs particularly, and yet there's enough reverence for them that they aren't an afterthought.

There are some fairly blunt instruments used along the way but I'm not sure why you'd complain, much less be moved to write a performative one-star review. It's a Christmas romcom heavily featuring the music of George Michael: if you went in expecting Battleship Potemkin then you might've got your parties mixed up. Which is not a recommendation to just go with it and leave your brain at the door: it's funny and it's sweet at times, it's got some stuff to say about forging an identity as an immigrant, and it's full of the songs of one of our greatest singer-songwriters. Fun and, er, snow, there's enough for everyone.

More:  Last Christmas  Paul Feig  Emilia Clarke  Henry Golding  Emma Thompson  Michelle Yeoh  Lydia Leonard
Follow us on Twitter @The_Shiznit for more fun features, film reviews and occasional commentary on what the best type of crisps are.
We are using Patreon to cover our hosting fees. So please consider chucking a few digital pennies our way by clicking on this link. Thanks!