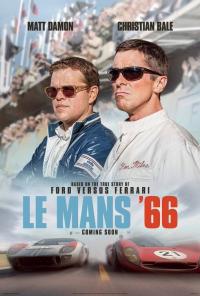 I’ve come to realise recently that I don’t like car chases. Sure, some are ok, like when they’re used to actually tell a story, as in, say The Italian Job, or when they involve big stunts, like when a fast and/or furious launches Vin Diesel at a Godzilla or whatever. On the whole though, they just seem like endless pedal-pushing and an ever-increasing number of gear shifts designed, I imagine, to provide lusty material for those that just really get cars. I am not one of these people, so you can forgive me for going into Le Mans ‘66 having previously prepared to pretend that the whole film is just about Bruce Wayne test-driving a new Batmobile.


It turns out, though, that the film is really rather enjoyable, despite being made almost exclusively for mechanics. The two-and-a-half hours vroom by at a zippy pace and all the racing scenes are really quite exhilarating. Maybe I’m starting to become a car guy? Or maybe I have spent too much time this last month on my phone, playing Mario Kart.

It helps that the story is housed within an underdog story template so familiar it’s the viewing equivalent of sitting in your favourite easy chair. The stakes are high, the odds are low, spirits are roused at the right times and every now and then someone says “son of a bitch” with an air of impressed disbelief at having witnessed some accomplishment otherwise lost on the audience. Also, the entire film is basically a giant montage occasionally interrupted by dialogue and a race or two. But goddammit if it isn’t just so good and nice and easy to watch. 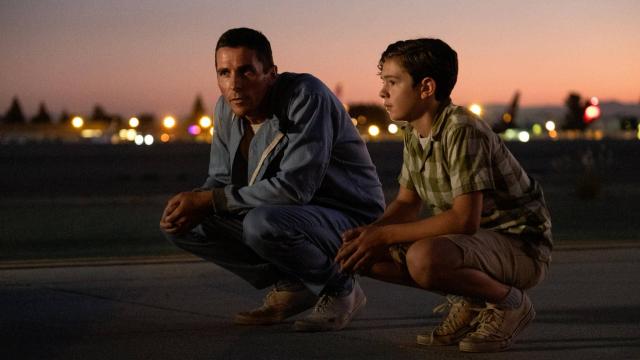 They got halfway round the track before realising they had both forgotten their cars.


Underpinning all of this, of course, is the acting powerhouse duo of Matt Damon and Christian Bale, both seasoned titans of the ‘compellingly Oscar-worthy’ film genre and both therefore making each other seem average sized. Damon plays Carroll Shelby, a celebrity former-racer approached by Ford to help them create a race car that will defeat Ferrari at Le Mans, proving their credentials as a cool car for young people and ultimately achieving that wholesome and profound goal of boosting their own sales a bit. As Shelby, Damon brings heart to the conflict he faces in working with jerk-off business types and vouching for temperamental, renegade engineer/driver Ken Miles, played by Christian Bale who is, by a considerable degree, having the most fun between the two.

"
"
It’s a finely-tuned film that has all the right parts in place plus other car service analogies
Bale’s Ken Miles is just an interesting character to watch at all times, even when he’s only in the background. Punctuating his performance with meaningful glares or expressionistic scoffs, Bale injects the film with the kind of screen magnetism this kind of awards-bait desperately relies upon. Which is great, because it makes up for the fact that Miles’ accent traverses the Midlands throughout the movie, only sometimes landing on his supposedly natural plummy Brummie, and the majority of his dialogue sees him mixing technical detail with a kind of reverential anthropomorphism about the cars he is testing. After finishing a round on the track, he’ll be heard climbing out of the chassis saying things like “The galve throttle needs more soul! She’s trying to sing, but the aluminium pin joints are too thirsty! It’s like... (*considered pause*)... it’s like air is trying to get up her skirt, but she’s too high off the ground for the piston bolts to crank the gearshaft!” Replace the film score with a low-fi jazz bass-line and this becomes a film about a grease-stained beat poet, misunderstood by a society who just thinks of cars as metal things you drive to the shops in. 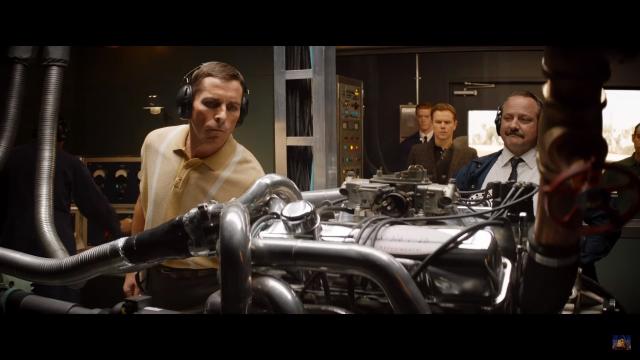 "Hmm, it looks like the sump-plugs need to dream bigger. Let's dial up the ARS valves and see if that makes her dance harder."


Elsewhere, the cracks show a little where this film’s real-life elements have been squarely hammered in to the film’s neat storytelling format. Case in point, the only real antagonist here is a Ford exec who has an early unfavourable run-in with Bale’s Miles and bears a grudge for the rest of the film, occasionally attempting to sabotage proceedings with subtle business decisions and committee judgements. As such he’s basically a high school bully of admin. He’s what happens when Johnny Lawrence grows up and swaps the Cobra Kai dojo for Conference Room 4.

Still it all comfortably amounts to a movie that is just really, wonderfully, reliably good. It’s a finely-tuned film that has all the right parts in place plus other car service analogies. I really don’t know what I’m talking about. I wish the drivers of Le Mans were allowed to throw green shells at each other.

Additional observations
- I really don’t know how Le Mans works, and I’m not going to bother to look it up, but there’s a lot of emphasis early on in the film that there is real peril in the race - it takes extreme, dedicated awareness and focus because it lasts for 24 hours. I feel this is undermined slightly when Ken Miles is allowed to take a nap halfway through the race and let someone else drive his car for him.

More:  Le Mans 66  Ford V Ferrari  James Mangold  Matt Damon  Christian Bale
Follow us on Twitter @The_Shiznit for more fun features, film reviews and occasional commentary on what the best type of crisps are.
We are using Patreon to cover our hosting fees. So please consider chucking a few digital pennies our way by clicking on this link. Thanks!