Review: Pet Sematary is flatter than a run over cat 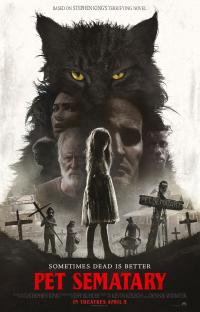 The long list of Stephen King adaptations run from the great (The Shining, Misery), the so-so (original Carrie), to the just downright silly one where everyone gets alien bum worms called "Shitweasels" (Dreamcatcher). Following on from the passable remake of It, where Pennywise became a sewer daddy for thirsty millennials wanting to bang clowns, the latest of King’s books to be resurrected is a confused and uninspiring mess that proves, as one character helpfully puts it, sometimes dead is better.


There's a reason why adaptations of Steve's books are so hit and miss. His building of suspense and creeping horror, coaxing out our most intimate and outrageous collywobbles and then laying them out in all their grisly glory, can be difficult to translate. Originally, King was reluctant to have Pet Sematary published, believing it to be too dark and nihilistic. But underneath the layers of bleakness, there is a fascinating look at the profound effects of grief and the stupid things loss can make you do. However, this latest adaptation from directors Kevin Kölsch and Dennis Widmeyer opts to drop things such as nuance in favour of superficial shocks and misplaced humour, capturing nothing of what made the original story so horrifyingly compelling.

The troubles start for the film and for our unwittingly doomed family the Creeds, when doctor Louis (Jason Clarke) and his brood consisting of wife (Amy Seimetz, who I was convinced was Maura Tierney until just moments ago) and two young children move to their new home to discover it has direct access to a public highway with speeding trucks and a pet burial ground just yards from the back door. Did he even read all the particulars on Zoopla? Then on the first day in his new job, Louis loses a patient who, for reasons never explained, becomes a spooky guide warning him not to go beyond the pet cemetery's boundary. Death looms over the Creeds, but despite Louis being a doctor and Rachel losing her sister at a young age, they're not very adept at discussing it. Even though they’re the perfect couple, they are extraordinarily bad at communicating: after a decade of marriage Rachel is apparently shocked to learn that Louis is agnostic as they try to explain death to their daughter Ellie (Jeté Laurence).

It's this lack of faith which is tested when Louis discovers Ellie's beloved pet cat Church squished by the side of the road, run over by one of those hurtling trucks that the directors overuse as a schlocky jump scare. Unable to use this as an opportunity to provide a valuable lesson to his daughter, even though being a doctor means he probably has experience of breaking bad news, and Ellie appears to be perfectly mature enough to handle her first experience of death, Louis is led by his creepy neighbour Jed (John Lithgow) to a CGI cemetery beyond the sematary, a place inhabited by a malevolent Native American spirit where it’s said the buried can come back to life. Jed tried it once with his dog, but when the dog came back it bit his mum, although apparently that wasn't out of the ordinary because according to Jed, the dog was already a horrible one, so probably nothing to worry about. Carry on. 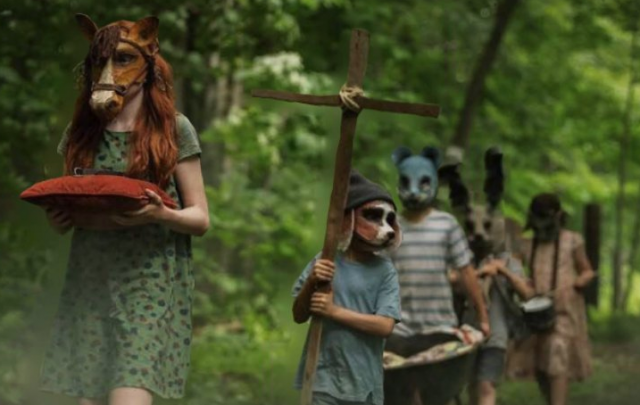 This looks like something can could be a valuable teaching lesson


When Church reappears in Ellie’s bedroom, with a mean streak a mile wide and comically fluffy eyebrows that weren't there before, Louis starts to suspect that something is not quite right with the spooky soil. A Google image search shows that this ghostly graveyard is the town’s worst kept secret, with an parade of zombie pets having returned through the years - someone even brought back their beloved prize bull, because reasons. So far, no one has dared to bury a human there: that is, until Ellie runs out into the busy road and tragedy strikes, and Louis is led to what he thinks is the only logical course of action, rather than immediately getting on the phone to the estate agent the moment they moved in.

Tensions do slightly ramp up when a changed Ellie returns from her shallow grave, but while the young Laurence gives an admirably creepy performance, this version of Ellie just acts more like an annoying little shit than a brain-hungry zombie. In the original story, it was toddler Gage who came back from the cemetery, making the resulting murderous rampage all the most terrifying as it was carried out by an adorable blond moppet, but the choice to change this is just odd, given it does nothing to enhance the plot. Likewise, too much time is given to Rachel's backstory and her fear of death, when the interesting stuff like the creepy kid procession from the posters and exactly why that person wanted to resurrect a dead cow is left by the wayside. Did the cow ending up killing people? How could they tell it was acting differently from before? Why bring back a cow?

King's hesitancy about his original story hung on the fact that the main thrust of it was that nothing matters; no matter what you do, things will only get worse. Louis' original downfall came about about because he tried the same thing again and again, hoping the outcome would be different each time. By aiming for more laughs than genuine chills, this nihilism is completely lost and the end result is more messed up than Church's face after meeting that lorry. As Stephen King adaptations go, 2019's Pet Sematary should have been left dead and buried with the Shitweasels.

More:  Pet Sematary  Kevin Kolsch  Dennis Widmyer  Stephen King  Jason Clarke  John Lithgow  Amy Seimetz  Horror
Follow us on Twitter @The_Shiznit for more fun features, film reviews and occasional commentary on what the best type of crisps are.
We are using Patreon to cover our hosting fees. So please consider chucking a few digital pennies our way by clicking on this link. Thanks!