IT'S A LITTLE BIT FUNNY

Review: Rocketman is a Bo Rhap glow-up... but then again, no 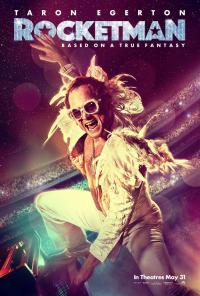 Put Bohemian Rhapsody out of your head: this jukebox musical about a flamboyant rock singer directed by Dexter Fletcher is nothing like that jukebox musical about a flamboyant rock singer directed by Dexter Fletcher. In principle at least, Bo Rhap made sense as a tribute to the mercurial nature of the Queen frontman, a celebration of his musical genius and his tragic legacy. Rocketman, however, is quite different. For starters, Elton John (Tantrums & Tiaras, Kingsman 2, every other fucking episode of the The Graham Norton Show, apparently) is alive and well and executively producing his own vanity biopic. As a celebration of Elton's music, Rocketman delivers a satisfying and foot-stomping soundtrack of wall-to-wall bangers, but as an exploration of the man himself, it lacks any notable dramatic impetus outside of the generic rise, fall and rise template. It's less a movie, more a West End stage musical in search of a worthy hero.


Stop me if you've heard this one before: talented young musician comes from nothing, makes it in the industry, fame corrupts, drugs are bad, rocky personal life, falls drunkenly in swimming pool like total edgelord, comes out better the other side, roll credits, official soundtrack available in all good record stores. The life of Elton John is remarkable compared to, say, you or I (for example, the highlight of my week was when I made an insurance claim on a broken carpet cleaner: that’s it, that’s my big second act), but in the grand pantheon of rock and roll's all-time deviants... well, he's not exactly Jim Morrison, is he? He's not Jimmy Page, is he? Elton is McCartney-adjacent. Equidistant between Lou Reed and Gary Barlow. In the last few years we lost two bona fide musical geniuses too soon in David Bowie and Prince, so forgive me if the story of a rich guy who spent the 70s coked up but got clean while remaining very, very rich doesn't exactly go breaking my heart. With John and partner David Furnish acting as producers, Rocketman feels precisely as cynical as Elton's mawkish John Lewis advert: an extension of the same endless, needless and unremarkable one-man marketing campaign. 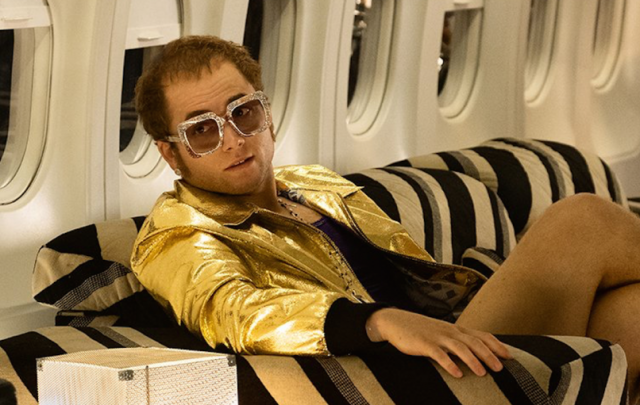 
My issue, therefore, is not so much with the film itself, more its lack of a reason to be. Why is this story being told now? Why is Elton John being recast as a tragic figure who just wants to be loved when he's spent the last few decades leaning into his wiggy diva persona? Rocketman's dramatic angle feels at odds with the public perception of Elton John as a hugely talented recording artist who would nonetheless be unbearable if you ever had to share so much as a postcode with him; "I started being a cunt in 1975, I just forgot to stop" he says, in the sole concession to his obviousness cuntiness. As well as being an accomplished pianist, it appears that Elton has also mastered the world's smallest violin.

"
"
You wish the musical numbers weren't shackled so slavishly to the story; visual metaphors here are biffed painfully on the nose
It would be easy then to dislike Rocketman, but that's not necessarily the case. For what it's worth, Taron Egerton works up a sweat and gives it the requisite welly, selling Elton as a Jekyll and Hyde type who's shy and meek behind the scenes but a monster on stage. The decision to have Egerton re-record Elton's vocals is a brave one, but it feels more like an impersonation than an inhabitation. You can always tell how bad an Elton cover is going to be by how much "HERRR-" the singer puts before the "L.A. lady" in 'Tiny Dancer', and there is no shortage of that here; it's an almost total application of the 'Vic and Bob club style' vocal (you can picture Egerton in the recording booth, rubbing his knees vigorously, gurning "I don't herrr merch, buert it's the buerst high cain derr"). Let's say it's about as accurate a caricature as Rami Malek's Freddie Mercury and leave it at that, although I am officially disputing Google's claim that Egerton is only an inch taller than Elton at 5'9" - he feels at least a foot too tall and a stone underweight if we're being kind (we're not).

Stockiness notwithstanding, Rocketman is staged to perfection and the costumes are spectacular - when the camera is moving and the glam is in full effect, you'd swear the real Elton had stormed the set and demanded a cameo (not outside the realms of possibility, let's be honest). There's sparkle and pizazz here that utterly eluded Bohemian Rhapsody, which feels positively buttoned down and drab in comparison, so basically a war crime. Dexter Fletcher clearly has an eye for lavish production, but you wish the musical numbers weren't shackled so slavishly to the story. Visual metaphors here are biffed painfully on the nose: Elton starts a pub brawl, cue 'Saturday Night's Allright (For Fighting)'; Elton's at his lowest ebb, roll 'Don't Let The Sun Go Down On Me'; Elton proves his critics he's still relevant, cut to 'I'm Still Standing'. I regret to inform you that, during the movie's title number, Elton John turns into an actual rocket, and it is every bit as cringeworthy as it sounds. I was waiting for the section of Elton's life that would somehow be soundtracked by his ode to lions fucking, but was spared that indignity. 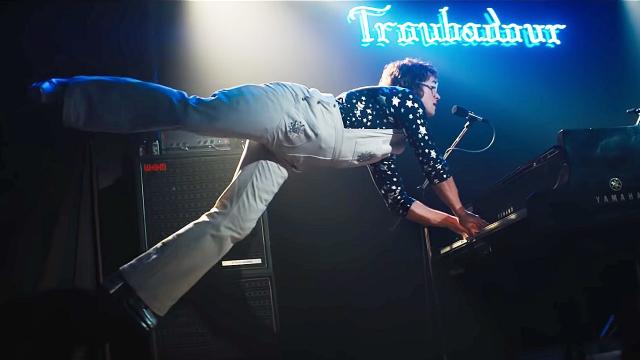 
There is fun to be had for a brief while: Elton's good times represents Rocketman at the peak of its ascension, and 'Honky Cat' is a vibrant music video shot with energy and humour. The musical highlight, however, is a beautifully pared back piano rendition of 'Your Song', as Elton tentatively finds his way into the song for the first time, literally making magic. The performance, directed at the song's writer, Jamie Bell's Bernie Taupin, is the film's only genuinely moving scene and the closest Rocketman comes to justifying its own existence; Taupin's own lyrics being sung back to him ("I hope you don't mind, I hope you don't mind / that I put down in words / how wonderful life is / now you're in the world") is a pitch-perfect paean to friendship and casts Bernie as Elton's true soulmate, a concept the movie otherwise fumbles.

"
"
The musical highlight is a beautifully pared back piano rendition of 'Your Song', as Elton tentatively finds his way into the song for the first time
The remainder of the film's emotional content never quite hits those heights; Bryce Dallas Howard's every scene as Elton's mother winds the movie like a punch in the stomach - she's, like, Catherine Tate's 'Swearing Nan' awful - and her accent speeds around the British Isles faster than Anneka fucking Rice. There's cliche here that could choke a horse: an uncaring mum, an emotionally absent dad, a scene - I swear to God - in which an adult Elton hugs his child self. The crux of the drama is provided by Richard Madden's lover/manager John Reid, whose lustful adoration sadly but predictably lapses into cartoon villainy. I incorrectly assumed that Reid was dead and thus incapable of filing a lawsuit, given his thorough shafting here and the absolute bodying he received in Bohemian Rhapsody.

Like one of Elton's stage costumes, Rocketman is a movie of high contrast: it's loud and proud and nails its colours to its considerable mast, but when it's not performing, it's a tuneless dirge so generic it could be about anybody. I can't remember the last time a film frustrated me so, alternating between grace and clumsiness, equal parts poetry and playbook, total diva meets basic bitch. When Elton's music is in full flow it's unstoppable, but for all its lofty ambitions, its fizz and its pop, Rocketman barely bruises the sky.

Additional observations:
- The end credits are unintentionally hilarious. Usually biopics like to give you a split-screen comparison between the actor and the real-life person, but given Rocketman is essentially 100% Elton the film vs reality comparisons in the credits are reserved for... Elton's clothes. Unsurprisingly, the film's costumes are very similar to the actual garments worn by Elton John, because they are clothes and that is not hard.
- Screenwriter Lee Hall's next project is Tom Hooper's Cats. I cannot tell you how conflicted I am about this motion picture, because I would claw your eyes out to see it, yet somehow am offended by its mere existence.
- My prediction: four Oscar nominations (Best Actor, Best Picture, Best Costume Design, Best Hair & Makeup)
More:  Rocketman  Dexter Fletcher  Elton John  Taron Egerton  Richard Madden  Jamie Bell  Bryce Dallas Howard  Music
Follow us on Twitter @The_Shiznit for more fun features, film reviews and occasional commentary on what the best type of crisps are.
We are using Patreon to cover our hosting fees. So please consider chucking a few digital pennies our way by clicking on this link. Thanks!