MAY THE SCHWARZ BE WITH YOU 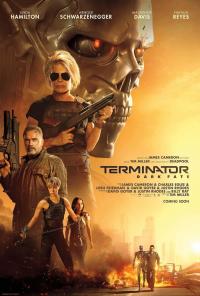 It's hard out there for the Terminators. You hate to see it. For three whole sequels - Rise of the Machines, Salvation and Genisys - the all-powerful killer robots from the future have suffered embarrassing losses in increasingly shitty movies, to the point where you wonder why they keep trying to enslave us at all. The Terminators, bless their hearts, must have done some serious soul searching, because they're back for more punishment, perhaps inspired by their motto (I am imagining "Absolutely do not stop ever until they are dead" written in "live laugh love" style wall-print cursive) and with a brand new plucky underdog status that it only earned through repeated failure. In a victory of sorts, Dark Fate manages to scrape an above average grade by clinging closely to the Terminator tropes with the kind of white-knuckled death grip that only three failed sequels can inspire.


To my eyes at least, it feels like Tim Miller's Dark Fate is the only recent Terminator movie to learn the right lesson from the James Cameron originals, which is that a female protagonist is what gives the franchise its dynamism. Terminator 3 botched an attempt at gender balance by giving its female Terminator inflatable tits; Christian Bale and Terminator Salvation fostered an environment of toxic masculinity which didn't contain a single memorable female character in its entirety; Terminator Genisys almost stumbled on this realisation by resurrecting the character of Sarah Connor but lumbered her with wooden male support like Jai Courtney, a man whose screen presence is akin to a wardrobe added to the set dressing. All the while, we were repeatedly gaslit: this is the Arnold show, the movies would say. You can't have a Terminator movie without Arnold, they said. Arnie, Arnie, Arnie, CG Arnie, Arnie. 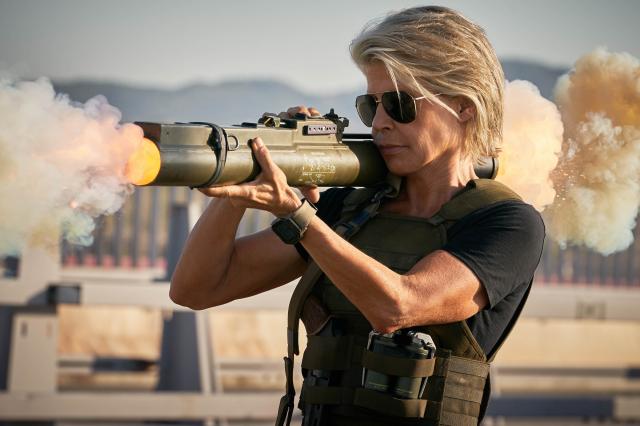 
Dark Fate, to its credit, does two things right. Firstly, it reintroduces the real Sarah Connor in the form of Linda Hamilton, who surprisingly returns to the franchise along with her ex-husband James Cameron, a man she'd probably also like to lower into a vat of molten lava if only he wasn't paying her wages. Secondly, it provides a vital shot of energy by introducing the franchise's second iconic female protagonist in the form of Mackenzie Davis's Grace, an 'augmented' human sent back from the future with something like a Terminator exoskeleton at her core. With short cropped hair, dirty vest and a female gaze-y athletic figure that screams "I will fucking BREAK YOU if you so much as TRY to chat me up at this roller-derby", Davis is the movie's, uh, saving grace, giving Dark Fate no shortage of memorable action scenes or dramatic impetus.

"
"
Dark Fate often merely has the appearance of being a 'genuine' Terminator movie
Where it falters is by eventually sidelining both female characters by insisting on shoehorning Arnold Schwarzenegger back into the story. Yes, again. This is by far the least necessary Schwarzenegger has ever been to a Terminator movie: Dark Fate chugs along nicely enough without him for its first hour, and absolutely does not need a big strong man to save it. Ultimately though, it's unable to resist the franchise's lowest common denominator, even if justifying Arnie's return ties the story into knots. Worse, his inclusion leaves you pondering a potentially hilarious spinoff in which we see how - and I'm being 100% serious - the Terminator finds a wife. The concept of a rudderless cyborg murderer dipping his toes in the LA dating pool is too amazing to toss off as a bit of plot fluff - either give us ITV2 dating show 'Terminator: Come With Me If You Want To Love' or admit the whole story thread is misguided at best.

Like some sort of robot in disguise, Dark Fate often merely has the appearance of being a 'genuine' Terminator movie. James Cameron is deemed worthy of a poster topline, but he's one of six writers with a story credit and you suspect his contribution was knocked out between Avatar sequel sessions; Arnie is front and centre but could easily be removed entirely by a more judicious editor; Sarah Connor is a welcome presence, but her humanity is absent - detached from her relationship with her son, she's little more than a Terminator herself, joylessly following orders without raising a smile. New ideas that are introduced are largely done so with a 'will that do?' shrug; the concept of 'augments' is fascinating, further blurring the line between man and machine, but it's lip service at best, left thematically unexplored. 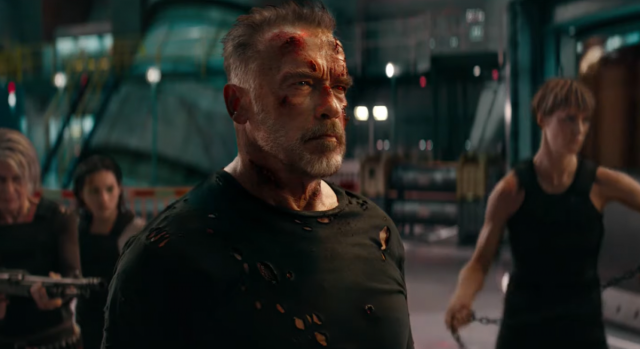 "I'll likely return in a future instalment i.e. be back."


Action scenes are at least suitably intense and have a satisfying clunk to them, with Deadpool director Tim Miller copy-pasting entire passages from the James Cameron playbook: big guns, big trucks, big explosions, big noise. Dark Fate is breathlessly paced, albeit formulaic in its loud-quiet-loud staccato rhythms, but it successfully delivers its payload of metal-on-metal slug-fests and vehicular carnage. The new Terminator, the Rev-9 as played by Gabriel Luna, is a clearly defined and pleasingly one note villain, with the ability to separate its T2-esque liquid form from its T1-style metal exoskeleton, effectively doubling the threat and the number of imaginative ways he can take a beating.

Otherwise, Dark Fate is found wanting in all the usual areas. Dialogue is either horrendously cliched or off-puttingly glib, or sometimes just plain stupid ("We can't say here!" says Grace, as our heroes dangle perilously in a car hanging upside down off the edge of a burst dam: no shit, she-borg). Ruminations on fate, humanity and destiny feel disconcertingly familiar and empty. Attempts at humour are, as always, ill-advised, with Schwarzenegger the source of most of the groaners. All of which is par for the course for this franchise, which I suppose you have to credit for not knowing when it's beaten. Dark Fate is a passable simulation of the franchise's greatest hits, an inoffensive cover version you can't get mad at, but no Terminator sequel or reboot will ever truly be able to avoid judgement day until the franchise gets comfortable enough to step out of Arnie's considerable shadow.

Additional observations
- Mackenzie Davis's most iconic scene comes in the final reel, where she uses her robo-powered arms to swing the shit out of a reel of chain, slicing and dicing her Terminator foe. It's a great example of ingenuity in the field of ass-kicking, using a technique that's a mixture of lo-fi and future tech, and a reminder that the Terminators in Genisys were defeated by... magnets.
- The movie's subtitle, 'Dark Fate', is utterly meaningless, in case you were wondering.

More:  Terminator  Terminator Dark Fate  Tim Miller  Arnold Schwarzenegger  Linda Hamilton  Mackenzie Davis
Follow us on Twitter @The_Shiznit for more fun features, film reviews and occasional commentary on what the best type of crisps are.
We are using Patreon to cover our hosting fees. So please consider chucking a few digital pennies our way by clicking on this link. Thanks!