Middle of the Road

Review: The Highwaymen is your dad's new favourite film I was reading an article today about the cartel leader El Chapo, who is currently in prison for murder, drug trafficking and money laundering, among other things. So beloved is El Chapo, and so cherished his image by the common folk of Mexico, he's been able to launch a fashion line from his cell. It's a curious feature of the human brain that we allow ourselves to be attracted towards these dark figures, hailing them as heroes despite the devastation their crimes have caused. I guess all it takes is a media-friendly mugshot and enough degrees of separation to empathise with someone who would do you harm if you ever crossed them. Back at the start of our modern press age, Bonnie & Clyde were like a prototype of the El Chapo phenomenon; shown a dose of forgiveness due to the romanticism associated with their escapades. The reality was they were killers who needed to be stopped - an inevitability due to the attention they'd brought upon themselves - and the job fell to two middle-aged men, sent criss-crossing endless dusty roads in an olde timey car. But just because there's nothing sexy about that story, does it mean it shouldn't be told?


Researching The Highwaymen has led me down a Costner-Harrelson wormhole. I thought I knew both the actors well, but never appreciated just how weird their output is. Despite looking like someone's angry dad all his life, Costner is apparently quite liberal and an eco-warrior, which explains Waterworld - the weirdest fucking film about paedo pirates ever - and his turn in JFK makes YouTube's deepest tinfoil-encrusted depths look about as countersocial as Nickelback. Harrelson seemed to go from doe-eyed beach hunk lead to Steptoe & Son stuck in the machine from The Fly going "kill me 'arold" almost overnight, now cast whenever a gammy unpredictable wild-eyed sort is required.

I mean all of that with the greatest of respect (God, don't tell Costner he'll tell me off - although maybe I'd secretly quite like that?). Admirably, both have stuck to their guns over the years, largely choosing roles out of interest rather than necessity, and surviving the great filter of public and critical opinion to become sought-after for their respective talents. And now they're together at last, married in their own uniquely distinctive watchable ways. Although it does say here they appeared together in a 1999 Ron Shelton boxing comedy called Play It To The Bone. One for the trivia bank. 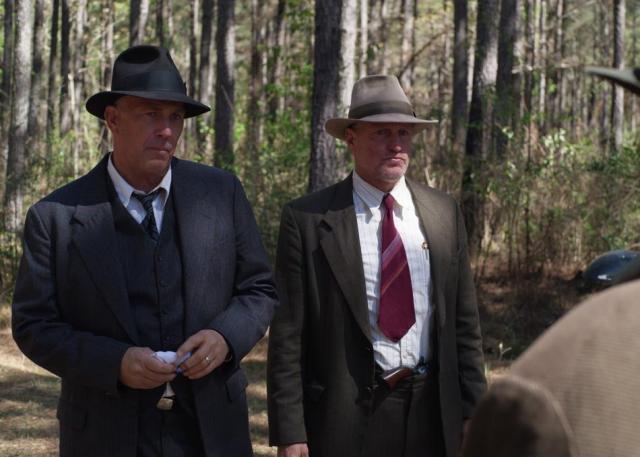 
Speaking of nerds. John Lee Hancock's attempt to tell the Bonnie & Clyde story from the point of view of the law is probably only one for history buffs and Bonnie & Clyde/Costner/Harrelson completists. Although I'd imagine the Venn diagram of those things is larger than you'd expect - it's just harder to identify these people since the demise of Geocities. Doing some armchair profiling, I'd place the target audience in two camps: 60+ year-old dads who've got you round to sort them out with Netflix because they've run out of Hitler documentaries to watch on History, or 40-something males who wish Kevin Costner was their dad. Tag yourself.

Anyway, the film. I'm struggling with this review, truth be told. It's not a bad film or anything, just hampered by sticking so rigidly to the real events to the point it forgets to be entertaining or interesting. Or maybe it was a problem with the older incarnations of the story that they took so many liberties they added to the myth. Costner and Harrelson play real-life investigators Frank Hamer and Maney Gault - legends in their own lifetimes. They're not the youngest bucks on the block, but they made a name for themselves busting bootleggers during the prohibition (i.e. they know how to get shit done), so get tasked with tracking down Bonnie & Clyde across the backroads and slums the pair had used to avoid the law thus far.

This ain't no buddy-buddy road trip, however. Harrelson may get a quip in here and there but it's strictly business - and it's no wonder the mood is so solemn when you consider the task ahead of them is stopping two young lovers who have caught the fascination of the public by whatever means necessary. There's actually some controversy about how the ambush leading to Bonnie & Clyde's deaths unfolded. Some participants claimed they were given no warning. Others said they were warned but twitchy trigger fingers took over. Another version has Bonnie screaming, which sets off the shooting. The way it plays out in the film is what it is, but the use of the actual death location and real footage of the bullet-riddled car felt like an unnecessarily ghoulish and tasteless decision. Your mileage for deathporn may vary. 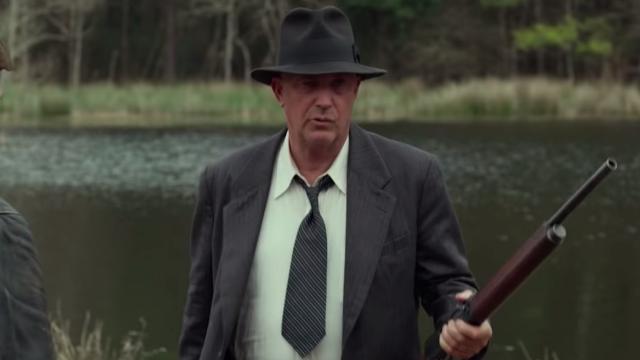 Would one scene where Costner dual-wields shotguns have hurt?


At points the film does almost come within touching distance of saying something about why two such people would take up robbing banks and murder. Scenes set in poverty-stricken neighbourhoods and tent cities highlight the struggle faced by ordinary Americans in the wake of the great depression of the 1930s. As well as this a general dislike and distrust of the law in the period following prohibition arguably helped fan public opinion in Bonnie & Clyde's favour as renegade folk heroes. Although this soon turned as the bodies piled up and everyone realised enough was enough.

In an ultimate act of shitting on the pot, the image of Bonnie as a lovestruck runaway is shattered as she is shown blowing the face of a helpless police officer, followed by Costner screaming "Your friends aren't human anymore!" at a character witness. So you see which side of the story we're coming from, even though we can never really know exactly what occurred during the robberies and killing sprees that gave Bonnie & Clyde their notoriety.

The Highwaymen is not a revisionist take by any means, but to its credit it is one you don't see very often these days: two old boys given the scent with a boot full of tommy guns, grizzled manners and their dwindling stamina to go on. Which sounds like a recipe for some gritty noir action, but it never really adds up to much more than an agreeable version of the actual events, and to be honest nor should it. It's a shame, then, that this meeting of weirdo star power is never more than pedestrian.