Review: The House With A Clock In Its Walls is a fun waste of time

Ugh. September. The worst month by some distance. Nothing good has ever happened in September. I checked history, which verified and confirmed: September is a dud. All the blockbusters are a distant memory, the big Christmas movies are too far away (see also: Christmas) and even the tiresome slog that is Oscar season has yet to get underway. That just leaves shitty geriaction movies where Denzel Washington kills people, horror movies that are too crap to save for Halloween and oddball movies that genuinely don't fit in anywhere else in the calendar. Mercifully, that last sub-genre occasionally yields surprising results, which is where The House With A Clock In Its Walls chimes in: it's not quite enough to salvage the September cesspool, but it is a fun kids' fantasy that does just about enough to distract you from the backslide into the arse end of the year.


Right away, you clock it as a blatant Amblin ripoff: the era, the American insta-filter, the kooky young kids, the mini Corey Feldman lookalike, the sprightly score, the spooky goings-on in the big house on the corner, right down to the - oh, the Amblin logo in the opening credits? Ah, fair enough. The House With The Clock In Its Walls has maybe 2% of that patented Spielberg movie magic, and I've absolutely no idea what audience the movie was made for, but it does have scares, it has heart, it has a sense of wonder, it has a sick sense of humour and it's creepy as hell in places. It ticks all the boxes but it feels more like a respectful imitation of an Amblin movie as opposed to one that truly embodies its spirit. 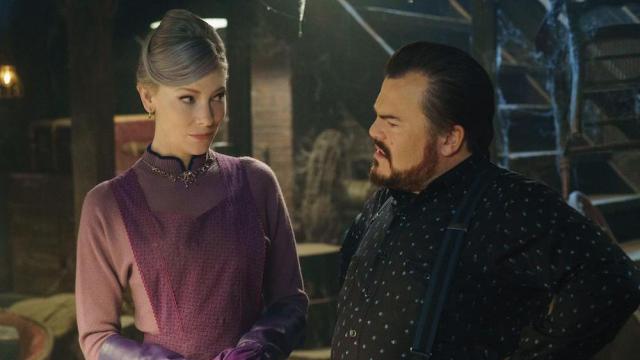 I'm dressing as Cate Blanchett for Halloween, don't try and stop me.


It's a curio all right: director Eli Roth is now doing dialled-down family-friendly horror, checking out of Hostel and into a haunted house, trading Cabin Fever for Goosebumps. The plot is your standard fantasy hokum, with an orphaned kid moving in with his estranged uncle who has magical secrets up his sleeve: it's a thick slice of Lemony Snicket, a touch of Edgar Allen Poe's Telltale Heart, a cynical dose of Harry Potter-esque wand-waving, the low-end budget of a Disney Channel movie à la Hocus Pocus, and the aesthetic of a Guillermo del Toro movie for kids, as if Crimson Peak's colours ran in the wash. It's at once overly familiar and disconcertingly weird.

"
"
The pointed, playful interplay between the two sets the tone for the entire movie
What holds it together is the fantastic and hitherto unthinkable partnership of Jack Black and Cate Blanchett, each of whom treats the material exactly as seriously as it deserves. Black, channelling a low-end Vincent Price, enjoys great back-and-forth with a barbed Blanchett, playing a witch (definitely a mood) with a wicked sense of humour. The pointed, playful interplay between the two ("Choke and die!") sets the tone for the entire movie, only fading off at the end of the film where too much plot gets in the way. The cartoonish villain of the piece, Kyle McLachlan as played by Jacob Rees-Mogg, is way less fun than time spent with Black and Blanchett's bickering housemates.

Ten points also to tiny star Owen Vaccaro as the Harry Potter stand-in, who shoulders the weight of the story admirably, and gives good misfit - a most Amblin-esque quality. There's one scene in particular where he's called upon to indulge in his own weirdness and make magic his way, and honestly, it's wonderful: a proper celebration of oddballs, freaks and geeks. That’s about as close as The House With A Clock In Its Walls comes to forging its own identity; otherwise it's as routine and predictable as the passing of time and the slow march through this damned September.

Additional observations:
- How many other hardcore horror directors have gone straight like this? I can only think of that Wes Craven movie where Meryl Streep learns to play the violin or whatever.
- With a title like that, The House With A Clock In Its Walls will have no problem inspiring a porn version.
- Seriously, the little Corey Feldman lookalike kid is incredible, performing straight out from the uncanny valley.
More:  The House With A Clock In Its Walls  Eli Roth  Jack Black  Cate Blanchett
Follow us on Twitter @The_Shiznit for more fun features, film reviews and occasional commentary on what the best type of crisps are.
We are using Patreon to cover our hosting fees. So please consider chucking a few digital pennies our way by clicking on this link. Thanks!