Review: Venom is a toothless throwback to the worst era of superhero movies 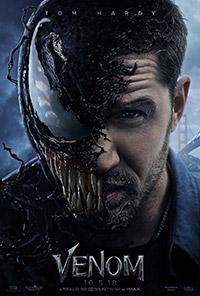 Let’s get something clear: it’s not grey-faced film snobbery, it’s not misunderstanding why a villainous antihero deserves his own movie, it’s not bad memories of Topher Grace, and it has nothing to do with Lady Gaga fans trying to help A Star Is Born top the box office chart. The reason why critics have felt their shitey sense tingling in advance of Venom’s release is because it has always looked terrible. The trailers showcased a comic-book movie from a bygone decade in which superpowers were fuelled by cheesey dialogue, bad CGI and maddening plot holes. We’ve all been standing downwind of this turd for quite some time, so low expectations are entirely justified. Ok, maybe it’s a little bit because of Topher Grace.


Low expectations work in the film’s favour because, as it turns out, there are actually still some things to like here. In what is undoubtedly an odd, standalone entry in the superhero oeuvre, cut loose from the franchises to which it should be tethered, here is a film that almost scrapes by on a unique sense of personality.

Tom Hardy commits to a dual performance, not just one combining down-on-his-luck journalist Eddie Brock and roided alien symbiote Venom, but one in which his hybrid character has to both carry the narrative and generally act silly, bewildered and crazy. It’s while doing the latter that Hardy manages to deliver some fun, and even funny, moments - often opposite a completely wasted Michelle Williams with whom he still has some actual chemistry - all while the rest of the movie clings to the most basic of superhero plotting, the most egregious of comic-book clichés and the most underwritten of villainous motives. 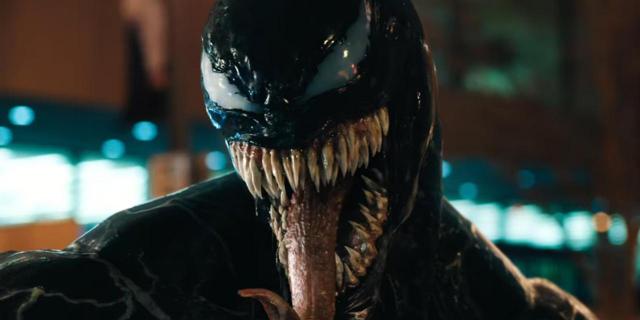 But girrrrrl, this alien got sass!


It’s almost ironic that Tom Hardy’s performance feels like it belongs to a different, far better version of this film given how much the script constantly reminds you that perfect symbiosis can only be achieved with a “perfect match”. Although, this idea is never fully explained (a match of what, exactly - blood type? Political ideals? Tinder profile compatibility?) and is frequently undermined as Venom appears to leap from body to body without too much trouble.

For his part, Hardy spends much of the film portraying a man with a deadly parasite in him in the same way that he might portray a man with explosive diarrhoea or a man working hard to carry the weight of a potentially awful comic-book movie: he shakes and sweats and jitters, completely unable to relax in case he accidentally unleashes a torrent of shit in front of a viewing public. And yet, it works. The best parts of the film see Brock discovering his new body hitchhiker for the first time, his head watching in stunned reaction to his own limbs fighting off dispensable henchmen with ease. These moments, coupled with scenes of awkwardness and confusion as Brock argues with the modulated voice in his head while also trying to hold down another conversation with an actual co-star, make for a genuinely enjoyable middle act.

Alongside all the inter-body interplay, however, is a title character whose biggest weaknesses are loud sounds, fire and several script rewrites. The symbiotic relationship between him and Brock is constantly mentioned but never really explained in a way that rings true for the rest of the film. Instead more questions are raised, such as in the instance when Venom’s disembodied voice tells Brock “I know everything about you” and “there are no secrets between us” only for Brock to look at his ringing phone and Venom has to ask “Who’s Anne?” 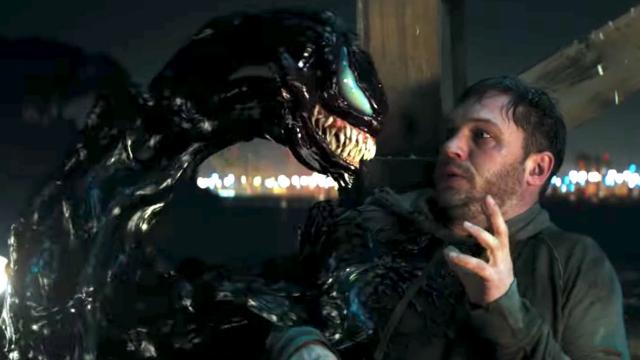 Pro-tip: If you get an alien symbiote to take over your hand for 10 minutes first, it feels a like somebody else is doing it.


In a clear effort to make Venom more likeable than the alien monster he technically is, the script has him biting heads off one minute and softening to Brock the next, even offering him romance advice at one point, making him the most quickly adjusted extraterrestrial in movie history. His overall arc from planet killer to planet saviour is explained with a single line of dialogue that isn’t backed by a shred of evidence in the rest of the film.

Overall, Venom The Character develops a welcome droll tone by the end of the film, which ends up being a far better selling point than any of the nonsense special abilities he gives Brock (um... cool bike skills, bro). Venom The Movie, though, fares much less well.

It’s been a long time since superpowers have looked this superficial on screen, with some scenes containing CGI that would look unfinished in a Marvel movie. It doesn’t help either that, whether it’s from the abundance of Hardy improvisation on set or from studio exec nervousness, this movie has been panic-edited into only a rough semblance of cohesion. A sub-plot about a separate alien symbiote slowly making its way to Riz Ahmed’s evil science lab is really just a series of distracting cut-away shots. Meanwhile, sudden location jumps are jarring and tension is thrown away at will, such as when Jenny Slate’s lab doctor manages to successfully hide her betrayal of Ahmed’s trust in one scene, only to be discovered in the very next one anyway.

Ahmed’s billionaire mogul Carlton Drake, by the way, is an identikit antagonist whose motives are never explained beyond “ugly aliens are really beautiful”. What he lacks in any kind of characterisation, he makes up for in a mighty superpower of extreme monologuing. This is a guy who you wouldn’t be able to ask if he had seen last night’s episode of The Apprentice without getting a grand speech about evolution and the pathetic physiology of humankind. Entire lunch breaks would be lost at work in the lab, because someone would feel obliged to try to include him in the tea run and everyone would have to sit and listen to impassioned talks about the necessary sacrifices that have to be made to make significant medical advances. The fact that, by the end of the film, his plan seems to involve him somehow arranging a space shuttle launch that he insists on flying solo is both utterly ludicrous and most welcome. 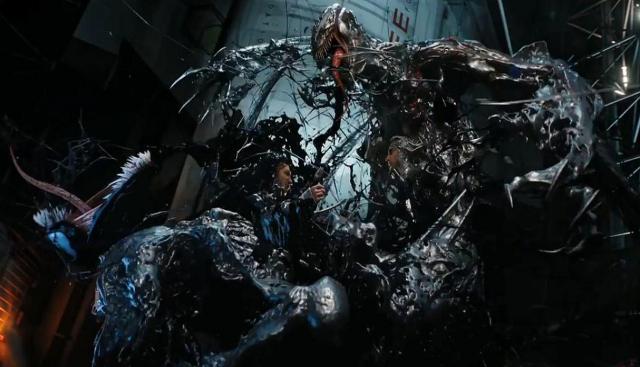 
Sadly, this isn’t even the worst part of the final act, which actively undoes a lot of the little goodwill that the film earns over the preceding hour. Nothing makes this film seem more dated in its own genre that a climactic fight scene between two computer-generated rage monsters, but this one is particularly chaotic given the nature of the aliens and the FX team’s apparent penchant for tendril porn. Following that with a couple of rule-breaking epilogue scenes that seem tagged on with no regard for how we got there - as well as an unnecessarily omniscient Stan Lee cameo - and Venom ends on a disjointed note. It’s a questionable resolution for a film about a giant grinning killer alien monster, that feels ultimately toothless, even if it is still, thankfully, Topherless.

Additional observations:
- There is a lot of talk about biting heads off without ever clearly seeing it happen, because the film is clearly pretending to be edgier than it is actually allowed to be.
- SPOILER: The post-credits scene is just a 5 minute clip from Spider-Man: Into The Spider-Verse, which only not isn't set in the same world as Venom, but it’s not even in the same fucking medium.
- (Also, you have to wonder if this brazen marketing move was a last-minute addition by Sony to try to get some kind of positive out of releasing this film)
- There is a mid-credits scene that fares better with some tantalising sequel set-up, but even that is spoiled by the vague sense that we'll never get to see the pay-off.
- The sheer lack of Spider-Man in the film really bugged me. They get around it quite effectively, so that there's no real reason to miss him, but... Venom is based on Spidey. He's supposed to have his look and his powers, and all of that is just ignored.
- That said, if there is ever going to be a plan to bring Venom and Spider-Man together, there'll be some continuity explaining to do. Not least because Tom Hardy's Brock here is shocked at the thought of aliens existing, so clearly this doesn't even pretend to take place in the MCU where there's now alien shit everywhere.

More:  Venom  Tom Hardy  Michelle Williams  Riz Ahmed  Ruben Fleischer  Spider-Man
Follow us on Twitter @The_Shiznit for more fun features, film reviews and occasional commentary on what the best type of crisps are.
We are using Patreon to cover our hosting fees. So please consider chucking a few digital pennies our way by clicking on this link. Thanks!